The 1992/1993 season commenced as the Olympic flame, so magnificently lit by an archer some two weeks earlier, was slowly doused.

The celebrations of Australian (and Mercantile's) success in Barcelona did not cease on that day at the Boathouse on Sunday, August 1992, when over 200 people were in attendance to witness the occasion. At the Hamilton's Porsche Showroom in Church Street Richmond, a magnificent celebration dinner for our Olympic success was held as a tribute to all of our Olympic competitors. A who's who of the rowing world were in attendance, with over 500 people, many well and truly coming out of the woodwork, enjoying a wonderful evening.

The well known after dinner speaker, Campbell McComas entertained the guests in his guise as Roly Sycamore, the starter for the 1956 Olympic Games. Several of the Club's wiser members were once again duped by McComas, as he had done at the Club's centenary dinner at the Dorchester Restaurant in 1988.

The season following an Olympic Games can sometimes be ones of taking stock, as oarsmen retire or take a season's break prior to commencing their next Olympic campaign. Who was to guess then that another of Mercantile's Olympic Gold Medalists, Drew Ginn, entered the Club's Youth ranks in the 1992/1993 season.

1992 saw the club set its targets for the next four years. A four year development programme was introduced for heavyweight and lightweight men. Named "Athens Assault 1992-1996", it began with a recruiting day targeting oarsmen for the development ranks.

However, the Olympic successes mitigated against this changing of the guard. While other members of the oarsome foursome rested Mike McKay continued. In the 1992/1993 season, the Club managed to boat strong squads across all categories. Names such as Peter Murphy, Ben Dodwell, Mal Shippen and Matt McArdle formed the core of the Men's Heavyweight squad; Georgina Douglas and Courtney Johnstone in the Women's Heavyweight; Simon Morrison, Alan Peckham, Richard Wraith and Gavin Hall in the Men's Lightweight, and strong representation in the under 23 and Youth age categories. 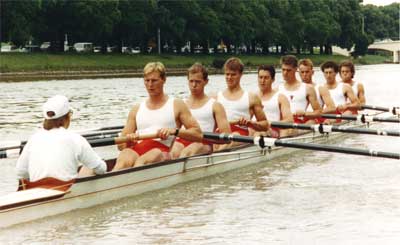 The strength of the club saw several members selected to compete at the 1993 World Championships in Roudnice Czechoslovakia and the Trans-Tasman Senior B series against New Zealand. Peter Murphy, Ben Dodwell, David Colvin (cox) and Noel Donaldson (coach) were selected in the Men's Eight, Brett Hayman (cox) and Steve Spurling (coach) in the Men's coxed four, Gavin Hall and Simon Morrison in the Men's Lightweight coxless pair, Georgina Douglas and Courtney Johnstone in the Women's Heavyweight Coxless four all were off to Czechoslovakia, while Duncan Ashby was selected in the stroke seat of the Men's Eight competing in the Trans Tasman series.

However success is not measured only in Australian blazers. This is merely the tip of the pyramid in any rowing club. The strength and depth of a Club is measured with success in the domestic season, and across all categories. The 1992/1993 season the club with moderate success across most categories, and winning the VRA senior premiership. And as was noted in the annual report, Mercantile "made an appearance on the Women's Premiership tables" after some lean years.

Mercantile participation at local regattas increased markedly during the 1992/1993 season. Wins were achieved at regattas all through the season, and included four State Championship Titles and four National Titles. In domestic regattas from October through to April success was achieved in varied categories from Novice through to the Senior C and Senior A categories and open events. Of particular note was the $1,250 prize money earned by the club with wins in the Men's Open Eight and Four at the Nagambie regatta. A further $1,000 was won at the Just Jeans regatta.

In addition, no less than fifteen members held either full or part scholarships with the Victorian Institute of Sport. Over time the VIS was become a bigger part of Victorian Rowing. While providing scholarships assisted in defraying the costs of competing for some of our members, the Institute was seen by some as much a competitor to Mercantile as some of our traditional rivals.

And while in Victoria we had a new 2000 metre course at Carrum, used for the first time for the National Championships and Kings Cup regatta in 1992, regattas were still regularly held on the Yarra and at other venues.

Due to a clash of dates, Scotch Mercatile was conducted on the Barwon River which provided a good venue for this event with over 2,600 entries.

The closure of the 1992/1993 season also saw a major change in the Club's administration. After 10 years as President, Robert (Bob) Aitken MBE stood down as President of the Club. It would be remiss not to pay due tribute to one of the greatest Mercantilians of all time. Tribute was paid to Bob in the Annual Report and it is worth noting that aside from being President of Mercantile for 10 years, Bob's influence in rowing at a club, State, National and International level was significant. He had also presided over the VRA and Australian Rowing Council, been a delegate to FISA, Chairman of the National Selection Committee, Umpires Committee and a former Captain and Vice President of the Club. And all this after a successful rowing career and a coaching career that culminated in winning the Bronze Medal with the Men's Eight at the 1956 Melbourne Olympics. 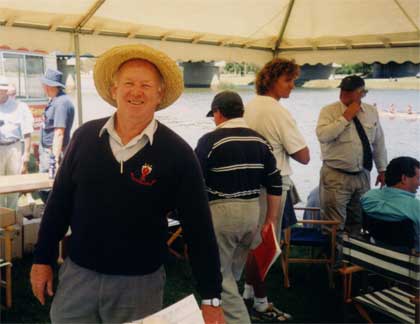 And after 5 years service as captain Jeff Lawrence also stepped aside to hand the reins over to a new generation. In his advice to members, Jeff noted that the Club has been through its most successful period but bemoaned the lack of progress on one major front for as successful a club as Mercantile — the poor standard of the clubhouse and facilities.

While some minor refurbishment of the building had been undertaken in 1992 to provide a bigger gymnasium area, it was becoming quite apparent that a major refurbishment of the Clubhouse was required if it were to continue to meet the needs of a successful rowing club. Even the revered south west corner, while still providing a modest income to the club, was badly in need of a facelift.

Overall, however, no one could doubt that under the guidance and administration of both Bob Aitken and Jeff Lawrence the club was in a much stronger than when they assumed office.

1992/1993 also saw one of the major thorn's in our side removed — that of a lack of security of tenure. Negotiations for a new lease with the Melbourne City Council had been ongoing for over five years, but a new 21 year lease was signed during the season, ensuring a stable tenure to allow for longer term planning. While it had never been seriously believed that the Club would be forced to vacate its home, it was still a major relief to have tenure secured. Club member Andrew Guerin led these negotiations on behalf of the Princes Bridge Clubs.

The year also saw Mercantile obtain a new sponsorship agreement with Carlton and United Breweries. The costs of running a rowing club were ever increasing, and with membership numbers limited by shed capacity, alternative sources of revenue were always being sought. The new agreement not only delivered to the club barrels of the sponsor's product, but also $10,000 per annum over the course of the five year agreement.

This support, along with donations and fundraising from social events, enabled the purchase of a new lightweight four and the conversion of seventeen Macon blades to the new cleaver style. It would also be remiss not to mention the generosity of club member Harry Mahoney which enabled the purchase of four cleaver blades for the oarsome foursome.

The new blades were a major change in rowing equipment, somewhat revolutionary rather than evolutionary. Although it should be noted that a similar blade design was pursued by revered coach Charles Saleh with timber oars in the 1950's. Everything old is new again?

1986 had seen the first of a long run of Victorian wins in the Kings Cup. In 1993, Victoria was again victorious at Lake Wivenhoe in Queensland. With Matt McArdle, Richard Shenfield, Ben Dodwell, Mike McKay, Peter Murphy and David Colvin (cox), coached by Brian Richardson and Steve Spurling, Mercantile again formed the core of the winning crew.

Our representatives at the 1993 World Rowing Championships in Czechoslovakia had a Regatta that could be described as "what might have been". Each of our members made the respective finals, however two fourth places were the best of the rewards. Heartbreaking for Simon Morrison and Gavin Hall in the men's lightweight pair who led the race for 1600 metres but then missed a bronze medal by 0.02 seconds and the silver medal by 0.04 seconds.

Overall, the results for the Australian Team were promising with a gold and two silver medals, coupled with the fourth places of our members.