This period was dominated by the continuance of the great Oarsome Foursome under coach Noel Donaldson and the renovations of the boathouse. These renovations were to supply on going hall hire income which would support our rowing endeavours into the future.

It was also a most interesting period for Australian rowing. The sport started with high optimism following the great successes of 1992 but went to the depths of despair in 1995 when Rowing Australia almost went broke and had to be saved by the Sports Commission and the Olympic Committee.

The Board of Rowing Australia handed over their responsibilities to a provisional administration team comprising John Boultbee the then Director of the AIS, club member Doug Donoghue representing the Olympic Committee and the High Performance Director Matt Draper steered Australia to be the most successful nation in the world in 1996. Reinhold Batschi was recalled as head coach and club member and 1992 team manager Andrew Guerin was brought back from retirement in 1996 to manage the Olympic team.

Thankfully, the 1996 Olympic results were Australia's best ever and have never been surpassed. In 1996, Australian rowing was the best in the world.

The background to this issue was that Rowing Australia appointed Simon Gillett, a champion rower and a successful coach from the South Australian Sports Institute to become head coach. His foresight and strategies were good but alas the financial management of the teams was lacking. The overseas teams over spent their budgets and the crews failed to meet their objectives. Unfortunately the Australian International Rowing Foundation was lost in this process of paying back the lost funds but fortunately the Bromley Fund was saved.

Locally, the Carrum regatta centre was now being used in addition to the usual Ballarat and Yarra courses. This new course opened up rowing to the southern suburbs for the first time and gave the sport the potential for a far greater audience. As time would show, this was to be its greatest benefit for the sport as it was not favoured as a racing venue. Further insufficient maintenance was undertaken on the course and eventually the full 2,000 metre course was unable to be used. 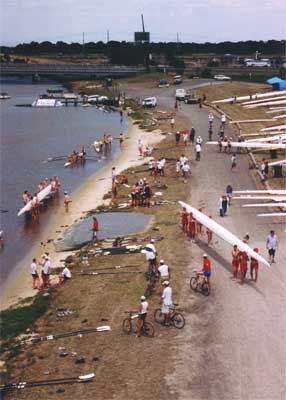 The Carrum course on race day

The Yarra River became more and more congested with commercial river traffic but work commenced in 1996 on a new course at Nagambie. Club members were prominent on the Victorian Rowing Association with Hubert Frederico being President and David Pincus chairman of their committee.

At Mercantile, the Oarsome Foursome was reformed and came through with the goods in 1996 with new member Drew Ginn. The other dominating matter for the Club in this period was the club house renovation. The club house was run down and in need of much work. Also the club required an income source outside its membership to survive against the sports institutes. Hall hire was going to be that source. Jeff Lawrence and club member builder Malcolm Robertson were the key people behind this endeavour. Jeff not only renovated the club house but also took to the care of the club's historical records. 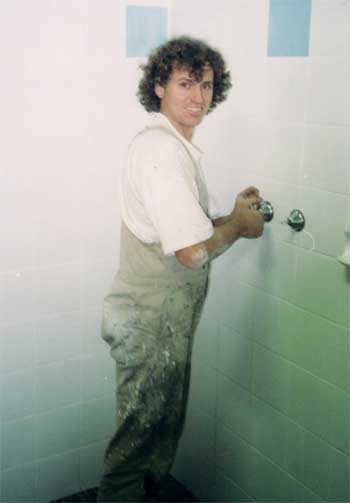 The Club lost significant and long standing members in this period. Former captain John Burford had had a long battle with heart disease and was awaiting a heart transplant when he died. As with John, he was active until the end swimming on a holiday in far north Queensland. John was a dynamic Captain and motivator. He ran a very successful business using these same characteristics.

Former secretary, Vice President and regatta king Bill Bradshaw also died after a long illness. He ran local regattas, Victorian Championships and National Championships as regatta secretary with great professionalism and skill. He was a person who brought numerous innovations to the operations of regattas in Australia.

1994 saw the passing of another famous Mercantilian, Keith Bilney. Keith commenced his rowing involvement as a coxswain at Mercantile in the 1926/1927 season. He then moved on to lightweight rowing when the limit was 63.5kg. However, Keith's main success came from coaching, winning the Penrith Cup on two occasions, in 1962 by what is still the biggest ever winning margin. To commemorate Keith, the Keith Bilney Memorial Trust Fund was established, along with an annual trophy to be presented to the coach who best exemplifies the qualities of the ideal coach at Mercantile. In the first year the award was won by Peter Somerville, coach of the Club's winning Junior four.

The Club also mourned the losses of other longstanding members such as Geoff McMahon and Warwick Mahoney in 1994.