Nick Newton finished his time as Captain and handed over to his Vice-Captain Martin O'Halloran. Jeff Lawrence was the new Vice-Captain and Noel Donaldson continued as Chairman of Selectors. Phil Ainsworth continued as Secretary and Richard Wraith took over as Treasurer.

In an Olympic year you expect the numbers in the senior ranks to be bulging and they were. Andrew Cooper finished his stint at the AIS and rejoined the squad which was again ably managed by Brian Richardson and Marty Aitken. Gary Merritt moved from Queensland to coach our Senior B group and ended up being named coach of the Australian Senior B eight to compete in NZ for the Trans Tasman series. Joe Joyce and Malcolm Robertson continued their good form in the lightweight division and were rewarded with a number of National titles. This year our new captain Jeff Lawrence took over the coaching of our junior four and while they could only manage second place at the Nationals the four oarsmen were selected to represent Australia against New Zealand.

David Pincus coached what could only be described as one of the best youth eighths ever to be boated by Mercantile. After an undefeated domestic season the entire crew was selected to represent Victoria in the Interstate Youth Eight Championship. The crew had a successful National Regatta winning the men's Senior B eight championship and finishing second by the smallest of margins in the Noel F Wilkinson Cup. 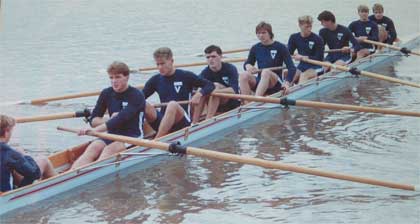 The results of our women continued to give us all both heart and encouragement. Brad Fry ended up coaching Rachael McInnes to victory in the Interstate Women's Heavyweight Four. Janet Cussen was selected in the Victorian Lightweight four which finished a very close second to New South Wales. Fleur Spriggs, who rowed in the AIS Junior crew, was eventually chosen to compete at the World Junior Championships in Milan in late August.

It was New South Wales turn to stage the National Championships and the course on the Nepean River at Penrith was to be the venue once again. If the 1988 regatta were to be characterised by one word it would be — RAIN! Quite simply it didn't stop.

Australian rowing had taken on a far more professional approach, especially since Batschi's arrival. Part of the enhancements was to provide the best possible opportunities for the competitors and that certainly extended to the course facilities. Penrith wasn't still water and with the rain portions of the river would have more run than others. Past regattas at Penrith have been similarly affected on at least one occasion severe enough to have swept the starting pontoons away. The new development at Penrith Lakes to the north couldn't come soon enough.

Unlike 1987, the 1988 Victorian eight wasn't totally filled up with Mercantilians. However, five oarsmen, cox, the two coaches and one of the emergencies weren't too bad all the same. Victoria has had some pretty good eights over the years, a lot of them won and some didn't. But sprinkled amongst them all have been some absolute beauties. Cecil McKay's 1930 crew at Mannum in South Australia won the Kings Cup for Victoria for the first time. Bob Aitken's first winning crew in 1952 beat the New South Wales based Olympic crew over three miles on the Nepean, not a bad effort. The 1956 and 1957 crews were very good in their own right and could also be defined as classics.

In recent times the David Boykett coached crew at Bundaberg in 1969 had been referred to by many as one of the best of the best. This crew "clicked" in both body and soul. The 1988 Victorian Kings Cup crew raised the bar another notch. Seated from the bow was Andrew Cooper, Gary Gullock, Mark Doyle, Michael McKay, Sam Patten, James Tomkins, Ion Popa and Peter Antonie stroke with Graeme Barns as cox. Every member of this crew had a pedigree, World Championship gold medals, Olympic silver and bronze medals, and a good number of previous winners in the big race plus a reasonable ex-lightweight to drive them down the course.

The Victorians were never in danger and never headed as they shot off the start at 42 strokes per minute. Given the wet conditions and the build in the river flow, the race time was always going to be quick, but in quick conditions crews tend to bunch up. This wasn't the case. They scorched over the course in 5 minutes 25.99 seconds in the fastest time ever recorded. A winning margin of over eleven seconds is massive at the best of times, but given the fast conditions it equated to well over four lengths which is staggering. It's interesting to note that, based on times alone, both the New South Wales and Victorian youth eights would have beaten the rest of the field home after Victoria crossed the line.

Bob Aitken was quoted a little earlier having made the following comment in the 1988 Annual Report. "It did not perhaps produce all the national selections to which we, possibly not without bias, considered that our members might have been entitled". In some instances the nominations for the Olympic squad were puzzling. Mark Doyle and Andrew Cooper were initially omitted from the team, only to be added much later on when the eight was performing poorly on the European trip. Steve Evans was selected as stroke even though his recent racing performances had been less than impressive. No women were considered good enough for the team but the newspaper backlash wasn't the sort of publicity that our rowing contingent needed. Then later on when Doyle and Cooper were added there were obviously two very disappointed individuals whose facial expressions were seen on television. In hindsight, the whole thing perhaps could have been handled better.

There is no doubt that the inclusion of the two world champions improved the balance of the crew. They pushed the previously undefeated West Germans all the way in the heat and qualified for the final via the repechage but they would need a super human effort to get a medal. A less than sparkling start in the final meant that they didn't really hit their straps until the 500 metre mark, but in this sort of company you are behind the '8' ball. Eventually coming fifth in a class field was not a disgrace but there were many disappointed individuals. The suggestion was even made that the Victorian Kings Cup crew would have been quicker. Peter Antonie's quad scull can fifth in their event with a gutsy effort while Hamish McGlashan covered himself in glory with a fourth place finish.

Our expectations of potential Olympic glory in 1988 did not come to fruition. We might have also expected to have had more than five of our members in the team itself. But by any measure all of our members were proud of the effort put in to keep Mercantile to the forefront of Australian rowing.

A development crew was selected by the Australian Rowing Council to tour Europe and America. It contained many Mercantile rowers and raced at Henley under Mercantile colours winning the Ladies Plate.

Phil Ainsworth's secretarial observations in the 1988 Annual Report adequately sum up the standing Mercantile had attained in the rowing community at the end of the Olympiad.

"It is pleasing to report that on the broader front of the survival of rowing on the Yarra, the situation has improved considerably over the last year. From a position where it looked as though rowing could be forced off the Yarra by commercial interests, things have improved to the point where we can look forward with confidence to rowing staying on the Yarra for the foreseeable future. The Melbourne City Council is now far more sympathetic to our problems than before, and aware of the benefits of rowing to the community at large. Andrew Guerin deserves a great deal of credit for helping turn the situation around".