Coming off a success induced "high" at the end of the 1985-1986 season, it might have been easy for Mercantile to rest on their achievements and to become complacent. The 1986 - 1987 season couldn't have been further from the truth. All the squads were still keen and young; Sam Patten also decided that his medical studies could play second fiddle to his rowing career again. Our successes across the board further emphasised that Mercantile was not only the premier club in Victoria but Australia as well. The achievements of our senior men, senior B men, the lightweights and the youth crews were outstanding. The club boated a large group of women's crews across senior A, lightweight senior B and Junior ranks. Brad Fry, Steve Mollard and Daryl Teschendorf coached them to some very good and encouraging results. 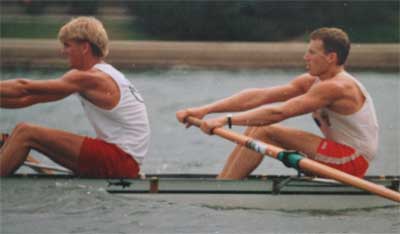 With this staggering and unparalleled level of success there was a downside. The sheer number of crews and the competition to get into them was putting serious pressure on the club's resources. It was around this time that the club lost its long term sponsorship arrangements with both ESSO and Carlton and United Breweries. Out of this adversity came moves to improve the overall amenities at the club, particularly the bar area. The idea behind this was to encourage members to take more pride in their clubhouse and to seek out the possibilities of hiring out the facilities for profit.

The rowing front couldn't be better. As a result of the magnificent input from all our crews and coaches at selection regattas and the Kings Cup and National Championships, twenty four of our members were chosen in Australian crews to compete in various International events around the world. Rachael McInnes became Mercantile's first women's representative when she was selected in the elite squad to tour Europe.

The Kings Cup regatta was due to be held on Lake Kurwongbah at Petrie in Queensland but had to be transferred to Lake Barrington because of low water levels due to drought throughout the south east of the state. We are indeed lucky to now have a world class course virtually on our doorstep and on call.

Mercantile has a proud history of supplying members to Victorian teams for over one hundred years. More recently this has extended beyond the famous men's eight oared boat to the lightweight four (initially coxed and since 1979 coxless), the youth eight and finally the women representative crews. It is interesting to note that since the Kings Cup became attached to the Australian Interstate Eight Oared race in 1921 Victoria has won it (up until 1986) on 22 occassions. On every one of those winning occasions bar one (1947), there was at least one of our members in those crews. It gives all members of Mercantile a very great sense of pride and achievement when their active members are significantly represented in any of the Big V crews, but more so if it is the Kings Cup crew. So there was great elation when it was announced that not six, not seven but all the members of the 1987 Victorian Kings Cup crew were from Mercantile.

There had been previous times when crews were heavily based with Mercantile contributions but it was extremely rare for one club to supply more than about five members. In 1922 the Big V was represented by an all Mercantile crew but it was not successful. In fact the last time Victoria was represented by a crew from one club (Corio Bay coached by Albert Bell) was back in 1948, which also happened to be the last time that a single club crew was actually successful in the Kings Cup (Haberfield from NSW when the race took place on the Derwent River in Hobart). But these times were different and this was a thoroughbred crew and the hopes of all Mercantilians were justifiably high.

Mercantile crews breasted the tape first at The National Championships on many occasions. Sam Patten and James Tomkins won the coxless pairs and joined with Michael McKay and Richard Howden (Graeme Barns cox) to win the coxed fours. Andrew Cooper won the coxless fours as an AIS/Mercantile representative. Malcolm Robertson featured in the winning lightweight pair and with Tom Sanchez in the four; Marty Owen was coach of both. Paul McGann's senior B's won both the four and eights in their category, in the latter David Pincus's youth eight came a creditable second. Phil Ainsworth coached the winning junior four — again! The scene was now set for the final day's racing and hopes were high.

Marty's lightweight four failed by only 0.75 of a second to retain the Penrith Cup but the Victorian Youth eight got there by about a third of a length. The crew was coached by David Pincus and contained seven oarsmen and cox from Mercantile. Rachael McInnes raced to victory in the two seat of the winning women's heavyweight four for the ULVA Trophy. All eyes were now on the Kings Cup. 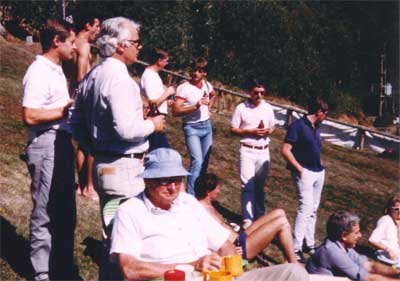 Mercantile/Victoria lead from the start and never let any of the other crews get into the race, in the end storming home by about 4.50 seconds or just on clear water. This was a remarkable achievement considering the intense training put in by the other crews. The strength of the Australian Institute of Sport boats and the emergence of State based Institutes meant that to have one club crew representing a state in any event let alone the biggest one was an exceptional feat. The other point to be made was the pride shown by all crews to do their absolute best for their state or territory. There were many sceptics who thought that the combination of the National Championships and the Kings Cup Regatta would erode the importance and worth of the latter. Evidence was being shown that they couldn't have been further from the truth. While the interstate races bore little or no relevance to one's chances of being selected in a national crew (that's why there were various selection regattas set up prior to and including the nationals) rowing for your state was still very special.

As previously mentioned, Mercantile was very well represented by green blazers across the Tasman and on the European continent in 1987. The two Martys, Aitken and Owen, were coaching some of our members in New Zealand while Phil Ainsworth took his Junior four to both the World Championships in Cologne and the Match des Seniors in Aigubelette in France. The Senior World Championships were allocated to Copenhagen where we had Cooper, McKay, Mark Doyle, Tomkins and Patten waving the Mercantile flag in the eight. Richard Howden and Peter Tomanovits were in the pair, Tom Sanchez row in the two seat of the lightweight eight and Rachael was in the coxed four. Regrettably these championships were marred by the weather which made conditions unfair. As a result of the unfair course, FISA made a most extraordinary decision and allowed the fastest qualifiers the choice of lane.

The eight couldn't back up on its incredible performance in 1986 and finished a very disappointing fourth. In years gone by this might have been quite acceptable but Australian rowing had "moved the bar higher" and medals were now the expected reasonable measure of performance. However, they were moved from the favoured lane six to the rather unfavourable lane two one hour prior to their A final. Although the wind dropped for the final, their lane was unfair and the change unsettled the crew.

The eight was the best placed of all the team and there were too many crews (as far as the selectors were concerned) that didn't make their respective A finals. There was plenty of work ahead if these results were to be turned around in time for the Seoul Games in 1988. Rachel Mclnnes raced in the women's four which finished eighth.

Mercantile was well positioned at the end of the season to be reasonably confident of our Olympic aspirations. We had the coaching staff and the quality bums on seats to reproduce the previous year's results, and better. Did we come up short? Our President's comments in the 1987-88 Annual report best sums up an inevitable sense of anti climax.

"We have enjoyed a successful season. It did not perhaps produce all the results which we would have liked nor all the national selections to which we, possibly not without bias, considered that our members might have been entitled. Nevertheless we maintained a strong entry at almost all regattas culminating in the National Regatta where we must have had the largest entry in both men's and women's events of any club in Australia, and our fair share of success".

As one may have expected, Sam Patten jointly won the Captain's Trophy for most wins and Andrew Cohen was awarded the R A Cooper Memorial Trophy for the clubman of the year for his work on social functions during the year. Bill Webster won the Max Bailey Trophy for coxing the most crews to victory.