The 1985-86 season could best be crystallised as the crashing together of the building blocks. The National rowing authorities had been defining and refining selection criteria since Batschi arrived in 1979. Mercantile too was building a very successful culture, particularly through the endeavours of the chairman of selectors Noel Donaldson. Now, Mercantile was supplying a steady stream of personnel for a variety of Australian representative crews. In a stellar year, we won State Championships in the following eight-oared boats; senior men, under 23 men, lightweight men, Senior C men and Youth.

With these wins there were going to be a good number of Mercantilians wearing the Victorian dark blue at the Kings Cup and National Championship regatta at West Lakes in South Australia. With the advent of competition in the Trans Tasman series against New Zealand, under 23 international regattas and junior championships there were many opportunities for green blazers over and above the Senior World Titles. 1986 would also see the re-introduction of rowing to the Commonwealth Games arena for the first time since 1962.

At West Lakes our members contributed to wins in a vast array of boats including men's coxed and coxless fours, Joe Joyce in the lightweight four, senior B pair, four, and eight, Junior four and another National title in the women's Senior B lightweight four. A number of high places were achieved as well so the future looked good for the interstate racing on the final day.

Joe Joyce, in the three seat of the lightweight four, became the first Mercantilian to win a Penrith Cup medal since 1976. For good measure, Mercantile supplied all the members of the winning Youth eight which retained the Noel F Wilkinson Trophy by about a length form a fast starting Queensland crew. David Pincus as coach did a wonderful job with crew as they were undefeated throughout the year. The Victorian Kings Cup crew comprised six members from Mercantile and two from Banks (Lowe and Poppa) and won handsomely from New South Wales and South Australia.

The list of Mercantile members achieving the goal of an Australian green blazer was most impressive. Callum Hair, Simon Quirk, Jason Kovacic, Jason Kerr, Bill Webster and Phil Ainsworth (coach) had the double trip of being selected in the men's eight for the junior Trans Tasman series as well as the Junior World Championships later on at Roudnice in the Czech Republic. For the under 23 Trans Tasman series, Paul McGann was selected as coach for the women's sweep while Richard Howden, David McLeod, Paul Williams, Peter Tomanovits, Anthony Johnson and Marty Aitken (coach) gained berths in the men's sweep squad. For the Senior World Championships in Nottingham and the Commonwealth Games in Edinburgh Joe Joyce retained his seat in the lightweight four while Andrew Cooper, Michael McKay, Mark Doyle and James Tomkins were selected in the men's eight. Ian Belot was an emergency for the eight and rowed in the coxless pair while David Doyle and Neil Myers were in the coxless four.

A team of 42 oarsmen and women, eight coaches and two officials were selected to represent Australia at the 1986 Commonwealth Games. It was the largest rowing team ever to be assembled to leave our shores. After the Games a reduced team would then go onto the World Rowing Championships at Nottingham. Joe Joyce's four would train in Geelong while the eight would be based at the AIS in Canberra.

Mercantile member Andrew Cooper hadn't been in the Victorian Kings Cup crew because he was an AIS scholarship holder and was already based in Canberra. Unlike 1985, this year's eight had all the cream of Australia's senior men's rowing talent to choose from. They would train full time and would otherwise be unencumbered by day jobs while they were in Canberra. They would be directly under the tutelage of Reinhold Batschi himself. The crew as it raced in Europe and in the UK was seated from the bow as James Galloway, Mal Batten, Andrew Cooper, Michael McKay, Mark Doyle, James Tomkins, Ion Popa and stroke Steve Evans. Dale Caterson steered the boat and Hamish McGlashan was emergency. They had eight training sessions on the water per week with a further three in the gym. Sunday was a rest day.

The limitations on attracting rowing competitors to the Commonwealth Games had lead to its removal as a sport after Perth in 1962. While the rowing community cheered its return at Edinburgh (Strathclyde Park actually) the future looked bleak when you consider that only Australia, New Zealand, Canada and England were fully represented. It is complicated when you consider that Scotland, Wales and Northern Ireland participated as separate entities. No matter how few the competitors may have been the racing was intense and taken very seriously. Australia ended up winning four gold medals (men's and women's eights and the men's and women's lightweight single sculls) and a very good selection of silver and bronze medals as well. Joe Joyce's lightweight four picked up a silver medal for their efforts behind a slick UK four.

However it was at Nottingham a short time later that our great expectations were realised. Peter Antonie won the men's lightweight single sculls by literally the width of a bow ball (0.02 seconds). 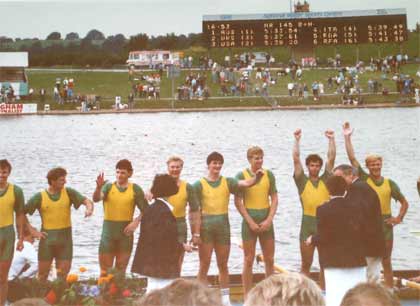 In the heats of the men's eights, Russia took a two second lead after 500 metres and went to the line 1.38 seconds clear of Australia with New Zealand third. Australia needed a 1 - 2 finish in the repechage to make the final; second behind the US was enough but it wasn't convincing. But unlike decades of other crews contending that they "could have" or "should have" or simply just being happy to be there, this one was different. Undeterred at being fourth at the 500 metre mark, they pushed up to second behind the USSR at the half way mark. From there it was about a canvas first at the 1500 metre point and clear water and going away at the finish. Apart from being the icing on the cake and absolute justification for the appointment of Reinhold Batschi back in 1979, Mercantile members provided the middle four of Australia's first ever senior men's sweep crew to win a World Championship. The magnitude of this achievement can never be underestimated. However, it was a pity that because of the time differential back to Australia, it did not receive the type of coverage in our daily newspapers that an event of this size should have.