The Olympiad commenced with Nick Newton as Captain with Andrew Briggs as vice captain. Noel Donaldson took over the role of Chairman of Selectors and was an important person in the Club's development over this period.

Success breeds success, but in Mercantile's case this was "Oh so true". Domestic regatta wins across the board, State Titles, State representation and a more than healthy sprinkling of green blazers as well. These achievements were the direct result of equipment management (a result of a strong club administration structure providing the boats and oars plus the recruiting enthusiasm) and our coaching base. Palfreyman, Aitken, Richardson, Donaldson, McGann, Owen, Spurling, Frederico, Pincus, Mollard and Ainsworth. If the measure of a successful club were bums on seats and people to coach and guide them in the Mercantile ways then our cup was certainly flowing over.

The Interstate Regatta of 1984 was the base for this Olympiad through the Victorian youth eight that provided the spoils of Mercantile's recent recruiting drive. Our representatives held down six seats in the boat plus cox, coach and emergency. James Tomkins at stroke and Michael McKay in the six seat helped to push their boat to an almost ten second win and stamped themselves as persons to be reckoned with in the future.

Not to be outdone by the rebuilding of the senior and junior/youth classification, Martin Owen a long time stalwart of the club was patiently re-establishing Mercantile as a force in the lightweight ranks. Under his influence he was gathering together such names as Pecham, Joyce, Borger and Mollison as well as the evergreen Malcolm Robertson. Many State Championships and National Title wins and high placings were achieved as a result of Marty's effort with help from Tim Frederico.

The year was special in other ways. It marked the first time Mercantile boated women's crews. Success at Mercantile seemed infectious and not to be outdone by their male counterparts, our women produced some fine wins. Susie Palfreyman coached a crew which won Mercantile's first winning women's crew at the Essendon Ladies Regatta on 10th February 1985 which is pictured below. They went onto win other races. Another crew coached by Steve Mollard won the National Championship Under 23 lightweight four. This crew is featured on the previous page.

The Yarra has been our river for well over one hundred years. We have known only too well the benefits our crews have had with the idyllic water conditions available for all year training and racing. On that basis, Phil Ainsworth's observations in the 1985 Annual Report are quite pertinentâ

Despite our club's success we face a potentially disastrous threat right on our own doorstep. The last few years have seen rowing gradually being pushed off the Yarra. The number of ferries has increased and with it the number of accidents and near misses. The ferry operators hold us in contempt and it is only a matter of time before a serious accident occurs. Also, the current government is encouraging greater use of the Yarra in the name of "progress"

In hindsight, rowers and administrators were probably naive to expect that others might want to enjoy the pleasures of our river as well. As the years roll on Phil must be commended for the accuracy of his vision.

A negative aspect of Victorian rowing was that our Kings Cup crews were not winning. By the term "Our" we mean a collective stance of the Victorian rowing community with a particular bias to Mercantilians. A close second in 1981 (maybe half a length), followed by a distant third in 1982, a close second again in 1983 (a long canvas after leading all the way) was followed by a very unconvincing third again on Lake Barrington in 1984. We have spoken about the health of our club but the vast majority of Victorian rowing personal and administrators tended to measure the health of rowing in the State of Victoria by our men's eight thundering down the course well ahead of their interstate rivals.

Our immediate expectations of a reversal of this situation took a bit of a dive when our senior eight was beaten at the State championships by a quickly gathered composite scullers eight. To be fair, they were fast and Mercantile was not far behind. Sam Patten chose to step aside from rowing for the season to concentrate on his medical studies while Ion Poppa just wanted a rest. To bolster our ranks, the Doyle brothers returned to the fold. The final squad included Mark and David Doyle, Martin O'Halloran, Ian Belot, Paul Thompson and a very youthful James Tomkins barely two years out of school. David Colvin, then still at Banks, would steer his first (of many) Kings Cup crews while the coaching duties were to be jointly handled by John Cumper and Brian Richardson. The makeup of Mercantilians in the Victorian Youth eight was even stronger.

In hindsight, very few people would have realised at the time that the 1985 Kings Cup and National Championship regatta would be the last one ever held on the 1956 Olympic course. When Lake Wendouree was good it was great but when the wind blew it was a brute. There were many old oarsmen with fond memories of Ballarat, particularly interstate championships. In 1956 our Mercantile dominated eight won the right to represent Australia at the Melbourne Games, in 1962 Victoria won both the eights and fours, the eight had a close but successful call in 1970 and again in the Olympic year in 1980. All of these crews had a significant number of Mercantilians helping them across the line.

As if Victorian crews in general and Mercantile crews in particular were bidding Wendouree a fond farewell, at least in a Kings Cup sense, the ultimate results achieved over the five days of the regatta were absolutely staggering. Mercantile members featured in seven winning National Championship crews across a broad range of boats from Senior Pairs (Belot and Tomkins) to Senior B's, Lightweights and Women. Even Sam Patten left his studies for a short time to win a title in the coxless four. 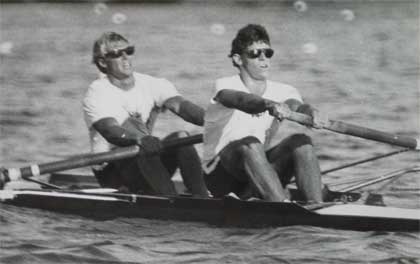 The icing on the cake came on the regatta's final day when crews had the opportunity to race in their state colours. In years gone by, Victoria has had some very successful interstate regattas when there were only three events on the program (Kings Cup, Penrith Cup and Presidents Cup). In 1964 and 1966 they won all three. When the women's interstate championships joined ranks with the men in the mid seventies, Victoria continued to have some very successful racing across the wide range of boat classes. 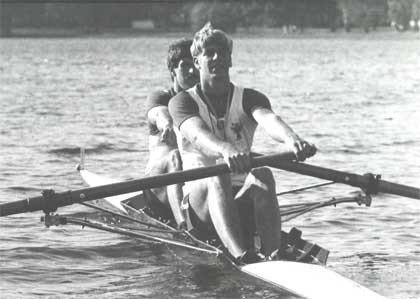 But 1985 was different, very different. Victorian crews excelled themselves to the extent that they only missed out on one trophy (the Nell Slatter Trophy) and that was Julie Slattery in the women's sculling championship. Our women won The ULVA Trophy (Interstate Four-Oared Championship) by almost 14 seconds and The Victoria Cup (Interstate Lightweight Four-Oared Championship) by a little less than one second, but a win's a win. The effort of the men was even more impressive, never before in the history of the Interstate Championships had one state won all the races on the program (four events now that the youth eight was included). Victoria annexed the Noel F Wilkinson Trophy (youth eights) by close on two lengths, The Penrith Cup (lightweight fours) by a similar margin and Gary Gullock snared the Presidents Cup by four seconds from Richard Powell of Queensland.

The best was saved to last. The Kings Cup squad, based on their National Championship results, would have been expected to acquit themselves reasonably well in the big race itself. James Tomkins and Ian Belot had won the coxless pair title and the eight's stern four of Tomkins, Mark Doyle, David Doyle and Ian Belot had come second to a Mosman combination in the coxed four event. Mosman was stroked by Steve Evans the 1984 Olympic eight stroke. Only the Doyle brothers and Belot had competed in the Kings Cup before, all without success. The crew may have been short on experience but they took the race by the throat in the most important part of any race at Ballarat, through the reeds. At the thousand metre mark they were about a quarter of a length up on South Australia who was in front of an unimpressive New South Wales combination. With 500 metres to go the lead was still a good third of a length and their tails were certainly up. The South Australian crew faulted with about 200 metres to go but the verdict was never in doubt. A very joyous crew crossed the line a little over two seconds in front in the Kings Cup record time (for Lake Wendouree at least) of 5:58.00 Within the winning Victorian crew, Mercantilians comprised the bow pair, the stern four, the coxswain, the two emergencies and Brian Richardson one of the joint coaches.

Usually in a post Olympic year opportunities to compete internationally were limited. The National selectors tended to concentrate on the under 23 and junior representative categories as the time was viewed as the perfect opportunity to blood new talent. Peter Tomanovits, Michael McKay and Andrew Cooper gained seats in the under 23 eight that was to be coached by Reinhold Batschi. Martin Owen was rewarded for his coaching efforts by being nominated in that role for the under 23 lightweight four. These crews competed against New Zealand boats in the Trans Tasman series. The eight also competed at the 1985 Match des Seniors at Banyoles in Spain where they won the silver medal. Cooper and McKay would revisit this venue again in 1992 for an even more pleasant experience.

There was a push to send a heavyweight men's eight to the senior championships at Hazewinkel in Belguim. Unfortunately, there was a somewhat lacklustre response from individuals to make themselves available, partly from 1984 Olympians wanting a break and also other potential oarsmen simply not being available. In then end Phil Cayzer was chosen to coach the crew and he eventually selected Mercantilians O'Halloran, Belot and Tomkins for their first green blazers. The crew was undermanned and ended up coming ninth overall. As further evidence that Mercantile was moving in the right direction with its lightweight squad, three members (Joe Joyce, Derek Mollison and Alan Borger, emergency) gained places in the Geelong based lightweight eight that eventually gave fifth in Belguim. David Palfreyman coached the women's pair to eighth place.

Not to be outdone, Phil Ainsworth's junior coxed four (Geoff Barden, Paul Somerville, Andrew Cohen, Stuart Paton, Peter Scott [cox] and Simon Kaye emergency) came a creditable fifth in their race at Brandenburg in East Germany. This crew was so successful during the year that they all jointly won the Captain's Trophy for the most wins of any rowers during the year.

Lindsay Wallis was awarded the R A Cooper Memorial Trophy for his fine maintenance work on the Club's fleet in a busy season.