If the Olympiad after Mercantile's Centenary year in 1980 were to be described as a period of putting the building blocks of success together, then the next Olympiad was to bear the fruit of everybody's endeavours.

The measure of success can not simply be summarised by the number of International representatives produced, elitism could easily be misconstrued as a healthy club. But the Mercantile environment that was visible post the 1984 Los Angeles Olympic Games had a thoroughbred likeness to it. There was a feel, a mood; there were great expectations ahead. Club members referred to the Club as the Mercantile Institute of Sport.

Phil Ainsworth also perfected the art of recruiting under 19 athletes, getting them across the line first at the National Championships and then getting them selected as the Australian junior crew. This was done with such regularity that one annual report suggested he must be setting up a travel agency.

It was a time where great oarsmen such as James Tomkins, Andrew Cooper, Mark Doyle and Michael McKay grew to be world champions and Olympians. The foundations of the Oarsome Foursome were created and the national and international coaching careers of Noel Donaldson, Brian Richardson, Martin Aitken and Paul McGann were forged. It was a period where the Club sent it's under 23 oarsmen in great numbers to the AIS for learning the disciplines of elite rowing under Reinhold Batschi who can take credit for their development.

Mercantile was on top domestically and creating the next generation of athletes who would dominate world rowing and help make Australia the top rowing nation in 1996. The hard work of past years was utilised to make us the best.

This period was the first time Mercantile boated women's crews. In our first year, the Club won a National Championship in the under 23 lightweight four. Within 20 years, Mercantile was to produce world champion women oarsmen. 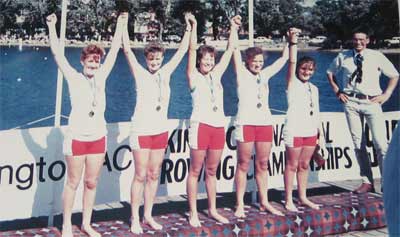 As with all periods, the Club lost some great members. Life member, past Captain and Vice President Deane Morgan died after a long illness. His enthusiasm as Captain after WWII led to the regeneration of the Club that led to the great successes of the 1950s. He presided over a period of great expansion in the Club. He was active in all levels of the sport until his illness eventually slowed him down.

Another life member in Doug Brooke also left us during this Olympiad. Doug was a superb and strong rower who rowed in the six seat of the winning 1930 King's Cup crew that won after an eighteen year drought. He was regular attendee and rower at the Club until the end. 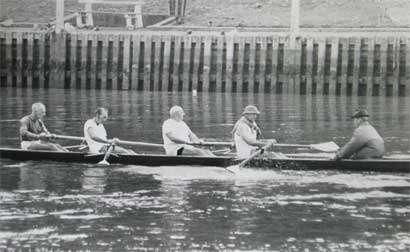 A third generation member in Dr Peter Gibbs died too early in life after a long illness leaving a young family. He rowed with great enthusiasm and maintained that enthusiasm for the club as a regular rower and coach. Another to go too early was Stephen Bostock who had only joined the Club from Geelong Grammar and had not yet raced for us. His sudden death took us all by surprise. The Club also lost an active member with matters maintenance around the Club in Jim McKeown. He was also a regular social rower.

Bob Aitken maintained his club presidency throughout this period of our history and Nick Newton was Captain until the end of the 1986-87 season when Martin O'Halloran took over. Phil Ainsworth was our constant and ever reliable secretary while Andy Guerin, John Matthews and Richard Wraith shared the treasurer's duties between themselves.