This Olympiad was significant for both Australian and Mercantile rowing.

At the Australian level, the recent appointment of Reinhold Batschi began to bear success with his vastly different approach to coaching, training and selection. The first significant change was the selection process, where small boat selection regattas would determine the composition of national crews. This selection method was to have a profound impact on the future successes of Australian crews in all forms of international competition with the 1980 Olympic crew being the first selected on a truly competitive national basis. In contrast, the three previous Olympic men's eight's had been based around the winning NSW King's Cup crews based at Sydney Rowing Club. With a growing base of active and good members, this selection process was to serve Mercantile rowers well. 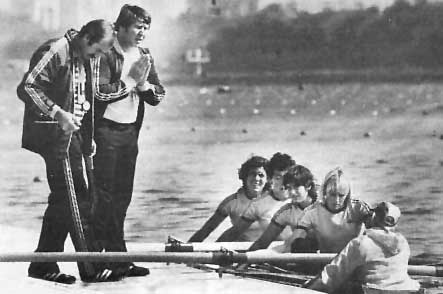 Australian rowing also embraced under age rowing fully in this period starting with an under 19 men's four in 1980 and leading to a full under 23 programme in 1982. This change benefitted Australian rowing and produced exceptional international success. Importantly for Mercantile, it was introduced at a time which suited the developing members of the Club and so we gained good advantage. The Club devoted considerable resources to recruiting, coaching and equipment to the under age area and perfected the progression from junior to youth, to under 23 and then to senior. Our successful international rowers were therefore well and truly born and bred Mercantilians.

The changes in Mercantile were less obvious but of equally great importance to us and in the end Australian rowing. To fully understand the position, one has to go back to the difficult time the Club experienced in 1973 & 1974 with the Clubhouse being destroyed by fire and the retirement of almost all of its senior oarsmen. The clubhouse rebuilding effort was not only in fund raising but also in physical effort in the construction of the building under Ted Sorani.

Rebuilding the rowing ranks was far more difficult and far more time consuming. Martin Owen, John Burford and others were excellent in their recruiting efforts and the fresh faced recruits of the mid 1970's were now in the senior ranks. Even more importantly the continuous recruiting through to 1980 had created a meaningful base of rowers. With the benefit of hindsight, the legacies of the 1970s were a base of active rowers, a culture of success, a strong work ethic in recruiting, a new boathouse and the renewal of the well known Mercantile spirit.

This legacy and the hard work that was to occur, enabled the Club to step up to the national level during the 1980-84 period and to further accelerate in the following Olympiads to significant international success.

Of great interest in this 1980-84 period was not only the continuing recruiting of great rowers, but perhaps more importantly, the recruiting, bringing back into the fold and/or blooding of many national coaches such as Martin Aitken, Phil Ainsworth, Noel Donaldson, Brian Doyle, Michael Manley, Paul McGann, Martin Owen, David Palfreyman, Peter Philp and Brian Richardson. Without doubt, Mercantile created the dream team of rowing coaches during this Olympiad with some of them going on to be world leaders in their field.

The Club also produced administrators during this period in the form of Andrew Guerin and David Pincus who would also go onto state and national roles.

The administrators of this period adopted the new order established at the national level and worked it to the Club's advantage. There were signs of strain within the Club as the young administration perhaps pushed faster than the older members would have liked. There was distress expressed by some members at the loss of club identity through composite crews at selection trials and at the national championships, the focus on selection at the expense of local regattas, the huge equipment costs in boating both small and big boats in the selection process and the speed of change generally.

Although the committee tried unsuccessfully to restrain Captain Andrew Guerin at times, as the young captain refused to acknowledge the concerns of the older members and led the Club head long down this new path. His approach to captaincy was simple, recruit coaches and crews, then lease or buy boats for them — all other matters were of a second order. His equipment spending habits gave him the nickname "Gough" Guerin as most boats were ordered before any fund raising was commenced for them. Fortunately the fundraising was usually completed within days of the delivery of the boats. The fleet was accordingly vastly expanded and renewed during this period. The Club's financial position also expanded through fund raising, donations and sponsorship. These new Club aims were also supported by other key administrators of this period including Nick Newton who followed Andrew Guerin as Captain, David Pincus, David Douglas, Brian Doyle, Jeff Lawrence, Martin Owen and Andrew Briggs.

Our great President Jim Sprigg retired from office in 1983 after 26 great years as President. Club members implored him to continue but his age and energy were failing him. At its meeting on 9th April 1983, the Committee reluctantly accepted his decision not to seek re-election as President.

The great affection and esteem in which he was held by members was reflected not only at the Club's centenary and at his final Annual General Meeting, but throughout his time as President. Bob Aitken reflected in the Annual Report that: All members will remember his unfailing interest in every aspect of the Club's activities, the lively barbecues on Jim's tennis court, the conducting of Cock Robin at social functions, the Good Morning Mr Sprigg and the genial words to young and old on Sunday mornings, the blatant assurance with which Jim pronounced that Mercantile was the Mecca of rowing preaching with equal confidence to the converted and the not so converted. He was perhaps the greatest of all our Presidents. A Testimonial Dinner was conducted in his honour and a Presidential port bottled. The quality of the cork dictated of course that it be consumed quickly. 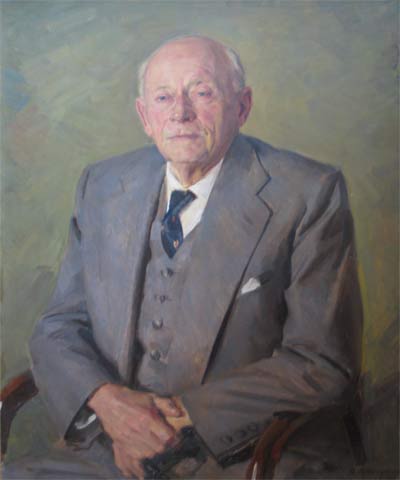 As with all periods in the Club's history, the Club lost some great members including former Captain John Gumley who died suddenly leaving a young widow and family and Vice-President Roy Thursfield.

Whilst the great successes of the Club were to happen in following Olympiads, many of the foundations can be found in this 1980 to 1984 period.