In October, 1978, the World Rowing Championships were held at Lake Karapiro in New Zealand, the first time that these Championships had been held in the Southern Hemisphere. The club was represented by Andrew Withers and Martin Aitken who were the stroke and coxswain respectively of the Australian coxed four which gained a creditable fourth position.

Club senior rowing was disappointing for Mercantile that season despite the leadership shown by many of our senior oarsmen and the dedication of their coach Brian Doyle. Despite the crew's performance, Shirrefs, Sloan and Withers were to row in the victorious 1979 Victorian King's Cup crew with Rod Guy emergency. This crew won the event from South Australia and New South Wales, thereby breaking the New South Wales domination of this event.

Andrew Withers was subsequently selected in the Australian eight to compete at the 1979 World Championships in Bled, Yugoslavia, with Shirrefs and Sloan competing as the emergencies to the eight, in the coxless pair event. The Australian eight repeated its performance of the previous year in New Zealand by finishing fourth in the final. John Hawkins also competed at these Championships in the Australian lightweight eight, and David Palfreyman was to coach the women's four.

Mercantile boated lightweight and junior crews throughout the season with little success, although the young junior eight under Phil Cayzer showed promise for the future.

This season's intensive recruiting campaigns led to the real success of the season; the performance of the youth and maiden crews. The club's victories during the season in youth and maiden events, together with the Victorian Youth Eight Championship, enabled seven club members to row in the Victorian youth eight, with other club members filling the positions of coxswains, coach and emergencies of that crew.

Notable returns to rowing that season were David Douglas and Stephen Gillon, who won the Victorian Coxed Pair Championship after a long absence from competitive rowing.

The 1979-80 season brought forth many changes to rowing in Australia, and therefore Mercantile, due mainly to the influence of the first Australian Director of Coaching, Reinhold Batschi, who was entering his first full season in that position. These changes were very noticeable at the senior level where the selection procedures were altered for crews to represent Australia in the Moscow Olympics and the World Lightweight Championships to be held in Hazewinkel in Belgium.

These procedures required the senior oarsmen and oarswoman to undertake a particularly intensive training programme beginning immediately after the previous season and culminating in four selection regattas held during the last two months of the season - the final selection trial being the National Championships.

For the first time aspirants for selection were required to race at these trials not only in an eight or four, but also in a pair or scull. Those who were to eventually gain selection in the Olympic crews were also required to train full time anywhere in Australia from the date of selection to the date of departure to the Games. The effort and expense to all those concerned was great.

Unfortunately Mercantile did not adapt itself as readily as it should to this new policy and as a result its Olympic contenders were only successful at the final selection trials, the King's Cup and National Championships.

In earlier years this would have resulted in the selection of a number of members but on this occasion only one, Andrew Withers was nominated in the initial Australian Squad.

Despite the fact that only one member achieved selection in the first year of operation of the new programme, it was generally agreed that an intensive training and selection policy of this nature was an important step in keeping Australia competitive at the international level. Mercantile endorsed this view.

The club was effected by these changes in its own selection policies and more immediately in availability of equipment. The need to boat senior oarsmen in all classes of boats plus the shifting emphasis to smaller boat racing at other levels left the club short of fours, pairs and sculls. This problem was worsened late in the season when the boat trailer, fully laden, crashed on the return trip from one of the selection regattas at Ballarat seriously damaging many boats. It was unfortunate that the club's equipment purchases had been unable to keep up with the demand for fours and pairs and our oarsmen did not always have boats available to carry out the training and racing programmes required.

Senior oarsmen available at the start of the season provided the club with its strongest and most experienced crews for nearly a decade. David Douglas, Stephen Gillon, John Harry and Joe Fazio (from Sydney Rowing Club), made a welcome return to serious rowing and achieved considerable success. They showed great determination to successfully break into the very intense training programme. They were joined by the top senior oarsmen of the past years, Benjamin, Shirrefs, Sloan and Withers, with the addition of Ion Popa from Romania. Peter Philp, who had been coaching successful lightweight crews over the past six years was to coach them all.

An early senior eight win in December was followed by a disappointing loss in the Victorian Championship Eights. Despite this Douglas, Gillon, Popa, Shirrefs, Sloan and Withers were named in the King's Cup squad but unfortunately Ion Popa had to withdraw after selection. However, success was not to elude them at the National Championships. Douglas, Shirrefs, Sloan and Withers performed creditably to come second in the coxed four championships, and later on the same day followed this win with a fine win in the coxless four championships.

Together with four oarsmen from the Melbourne and Monash University clubs they succeeded on the next day in retaining the King's Cup for Victoria. 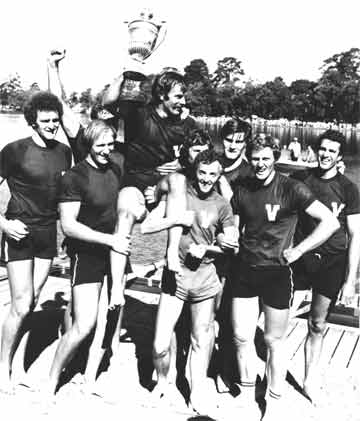 The club's lightweight oarsmen began a most promising season under coach Martin Owen with several wins in fours and a convincing victory over old rivals Melbourne University Boat Club in the first, and what was to be the last time the crews met in a lightweight eights race for the season. Soon after that race several crew members were forced to withdraw because of business and other commitments and the club was unable to boat an eight for the rest of the season. Thereafter only pairs and fours were raced in the major regattas and with limited success.

The junior ranks had a disappointing season with limited success, their highlight being a successful trip to the Royal Hobart Regatta.

In youth rowing a crew composed of Andrew Murchie, Cameron Hall, David Thomas and David Webster, with cox Mike Sim and coach John Burford had a very successful season finishing with a convincing win in the Victorian Youth Four Championships at Ballarat. 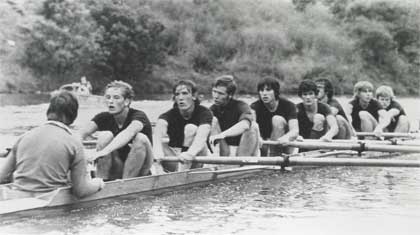 At the commencement of the season the constitution was altered to change the title of the club's chief executive officer back once more to "captain" though the responsibilities of the position were left unaltered. A former captain John Burford was elected to fill this re-named position and David Douglas was re-elected as chairman of selectors. Unfortunately David Douglas had to retire from this position in December due to his own rowing commitments, and Martin Owen took over. Also making a welcome return to the club's administration was David Yunghanns, who undertook the position of social manager. He organised an excellent evening at Gordon House which some 350 people attended.

Two particularly significant decisions were made by the committee during the season. The first was that the club should apply for a full club liquor licence in order to better provide for its members and also to help club finances. This decision was adopted unanimously by the club in an extraordinary general meeting. The second decision was to seek a sponsor for the club in order to cope with the rapidly increasing costs of equipment. Both decisions were thought to be necessary in order to prepare the club for the next decade.

During the past two seasons a sub-committee chaired by Bob Aitken, and containing members John Burford, Hubert Frederico, Andrew Guerin, John Harry, Deane Morgan, Bill Morrison and Martin Owen was appointed to prepare for the celebrations of the club's centenary. The major task of the sub-committee was to write and publish this history. The task was massive and the research difficult due to the fact that the two fires in the club's first one hundred years had caused the loss of all records prior to the turn of the century and much material relative to later years. The sub-committee was guided by Jim Main, the Sports Editor of "The Australian", whose experience and knowledge in the field of publishing was essential to the book's completion.

One of the most pleasant undertakings of the sub-committee was to commission the portrait of the president Mr. Jim Sprigg by Robert Hannaford not only to celebrate the club's centenary but also to mark the 25th year of his service to the club in that position.

The centenary is to be officially celebrated by a formal dinner-dance on September 19, 1980, exactly one hundred years from the day when the club was formed. 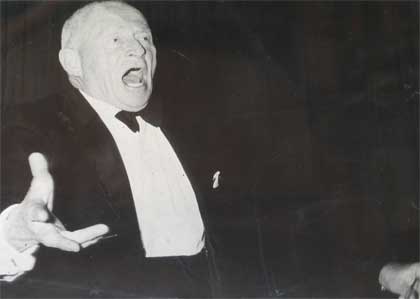 We shall gather at the river.

Further celebrations will take place throughout that week-end and the Scotch-Mercantile regatta in 1981 is to be officially designated as the club's centenary regatta. To help finance these various activities without drawing on the club's much needed revenue one hundred members and friends of the club have contributed $100 each to a centenary fund and these subscribers will receive numbered gold medallions struck to commemorate the occasion. Finally it is planned that the first season of rowing in the second century of Mercantile will conclude with the entry of a club crew in the Henley Royal Regatta in 1981 supported by a large contingent of members and their friends. It is hoped that the season will usher in another hundred years of such progress and success that the task of those whose responsibility it may be to chronicle them will prove a formidable one indeed.