Senior rowing began to show signs of recovery during the 1976-77 season under the joint ex-Sydney Rowing Club coaches of Phil Cayzer and John Nickson. Through the determined efforts of the coaches and the crew, several senior and open eight races were won, with Rod Guy, Stephen Shirrefs and Alex Sloan gaining selection for the unsuccessful 1977 Victorian King's Cup crew. However, the highlight of the season for the senior oarsmen was to come at the National Championships in Perth when Stephen Shirrefs, Alex Sloan and Peter Benjamin rowed in a composite crew to win the Champion Four without Cox. This victory completed a fine season for Peter Benjamin who had won many senior sculling races during the season, and had also represented Victoria in the President's Cup. 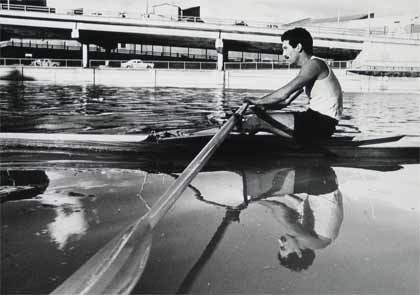 The lightweights were also successful at the season's end, although they met only mixed success during the season. The successful lightweight crews of the preceding season were now combined to form one strong eight under the joint coaching of Hubert Frederico and Paul Guest. The aim of this eight was to win the 1977 National Lightweight Eight Championship and thereby gain maximum club representation in Australian lightweight crews. The eight encountered severe opposition throughout the year from the Melbourne University Boat Club coached by Mercantile member Peter Philp, but was still able to retain the South Australian, Victorian and National Championships. This fourth consecutive Australian Championship win was the culmination of many years of determined effort and planning by the club's lightweight oarsmen. Former club captain, Martin Owen had competed in the past four successful crews and had been instrumental in leading these crews to their goal.

Following the victory at Perth, Hubert Frederico, who had added the finishing touches to the past four seasons of effort, was appointed coach of the first lightweight eight to represent Australia at the World Championships to be held in Amsterdam. This crew went on to win a silver medal at the West German Championships, a bronze medal at the World Championships and included club members Phil Ainsworth, Richard Garrard, John Hawkins, Ian Porter, Malcolm Robertson and Rod Stewart. Unfortunately this season was to be the end of a successful period of Mercantile lightweight rowing.

The maiden eight which rowed prior to Christmas was successful not only in the country regattas, but also at the prestigious V.R.A. Centenary Regatta held on the Yarra. These wins were the first coaching successes of Bill Ruttledge, who had also been instrumental in finishing many of the tasks remaining from the re-building project.

Despite the subscription increases at the beginning of the season, the financial strain and cut-backs in the boat replacement programme from the previous seasons were to have repercussions well into the future. In particular this season, the club resorted to raising loans from members to finance purchases of much needed equipment prior to the start of the season's racing. The severe financial problems of the club were further compounded by the need to support club members in crews representing Australia. Fortunately these crews were becoming increasingly dependent in their fund raising activities on corporate donations and sponsorship.

This season was also notable for Mercantile in that after 97 years of solely male membership, the club admitted women to Associate membership. The club at this stage had neither the facilities nor the equipment to be in a position to accept women as active rowing members. Women's rowing, following its introduction as an Olympic event in 1976, was now growing rapidly and taking a position of increasing importance in Australian rowing.

The Victorian Rowing Association celebrated its Centenary season in 1976, and several events, including a Regatta, were held to mark this event. The Association had come a long way from its initial responsibility of conducting the Melbourne Regatta, and was now responsible for a far greater range of duties. The newest activities included promotional campaigns to attract people to the sport of rowing, and the funding of State and International crews. Mercantile members were continuing to maintain their traditional active involvement in the Association and in particular Bob Aitken continued a long ling of such distinguished club members as Sir Stephen Morell, Arch Dobbie and Mick Williams, who have undertaken the responsibility of the office of president of the Association. In 1975 Bob Aitken was also appointed the first chairman of the Australian Amateur Rowing Council, and in 1980 was awarded an M.B.E. for his services to rowing.

The end of this season saw the retirement of Norm Cairnes from the executive of the club. He had returned to the club administration in 1973 following the fire to help guide the club through a most difficult period.

The 1977-78 season started with a successful Ladies Day with over 300 people attending. This opening day was to foreshadow an even more successful social function, the inaugural Christmas party which was held on Christmas Eve. About 400 people attended to see three beautiful reindeer, together with Santa Claus, being rowed up the river with a boat load of presents for the children. This most enjoyable evening was concluded with carols by candlelight being led by the senior eight choir.

That season saw a very determined effort by the senior eight, again under the joint coaching of Cayzer and Nickson. However, despite early success prior to Christmas, the crew was not able to head the strong crew from Monash University in the latter part of the season. However, Guy, Shirrefs and Sloan again represented Victoria in the King's Cup crew together with Andrew Withers who made a welcome return to King's Cup rowing. The additional Mercantile members had clearly strengthened the Victorian crew as the New South Wales domination of this event during the decade was nearly ended in a close race in Tasmania. Victoria had to wait another year for success.

However, Peter Benjamin represented Australia in the Maccabean Games in Israel, and sculled excellently to win a silver medal.

The lack of recruiting in previous years was now becoming evident with less depth of performance in the junior and maiden ranks than Mercantile had previously enjoyed. This problem was to leave the club relatively unsuccessful in that year and vulnerable in the years to come.

The lightweights, while many in number, were unable to withstand the stronger opposition from the Melbourne University Boat Club. At the National Championships the club's number one lightweight eight coached by David Palfreyman was able to achieve only second place, with Hubert Frederico coaching the number two crew into fifth place.

Despite a serious car accident after the National Championships which deprived three of the club's lightweight oarsmen of the opportunity of being considered for the Australian crews, Dennis Hatcher, Ian Porter and Malcolm Robertson, together with coach, David Palfreyman represented Australia in the lightweight eight event at the World Championships at Copenhagen. This Australian crew again won a bronze medal in this event.

Mercantile had always assisted Australian teams by offering the use of its club rooms for fund raising functions. However public controversy was to result from this practice when a "Night of Chance" was run by the Australian team at the clubhouse. 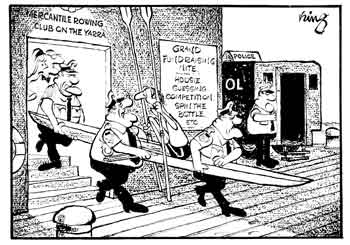 The Cartoonists view of Mercantile's Night of Chance

At about 11 p.m. when the party was at its height, undercover police from the gaming squad announced to all present that the function had been raided and that no-one was to leave the premises. Although many members escaped promptly out the back door, windows or onto the roof (including prominent vice-presidents and committeemen), about 200 members and rowing supporters were charged with being present at a common gaming house. It was alleged to be the largest gaming raid in Victoria's history. The evening's events were front page news throughout Australia with considerable radio and television time being devoted to cover the event. Questions were asked in Parliament and it did not even escape the pen of political cartoonists who made fun of the old saying "We'll go for a row".

However, the outcome was most beneficial for rowing and other amateur sports as the whole question of funding for international competition was discussed thoroughly in the papers, and radio and television current affairs programmes for some time following the function. The wave of public sympathy for the rowing team brought with it many valuable offers of assistance.

The court hearing (held after the crews returned from the World Championships) in which all were represented by club member Murray Kellam, recorded no convictions against those charged. The Magistrate criticised the police for their actions and called upon the Commonwealth Government to assist future Australian teams. Further public debate on sports funding followed the case.

The 98th annual general meeting of the club saw the retirement of Martin Tomanovits after three years as the first executive chairman. This position was filled by Andrew Guerin, a former treasurer and secretary of the club. David Douglas returned to rowing in an administrative capacity as chairman of selectors, and he, in conjunction with Andrew Guerin led a determined effort to strengthen the younger ranks of the club. This programme necessitated the purchasing of much additional equipment which was achieved despite the financial difficulties of the club, to ensure that all members could be adequately boated. The club took delivery during that season of a specialised lightweight eight shell, the "Martin Tomanovits", the club's first fibreglass boats, a regulation four the "Ted Sorani", a tub pair the "Lawrie Moll", and a set of 10 blades. These boats together with the racing four, the "Phil Cayzer", were christened at another successful Christmas party. This function was held in the newly timber panelled clubrooms, the panelling of which had been donated in memory of David Stirling by his family.