The fire and subsequent re-building project were not the only problems facing the club during the 1973-74 season; the club's ranks were reducing rapidly because of massive retirements. In the seasons immediately prior, and subsequent to the fire, 13 senior oarsmen retired from senior rowing and this was more than club could bear. The club was not going to adequately fill the gap created by these retirements until later that decade.

The senior eight of 1973-74 season under coach Hubert Frederico, although the best Victorian senior eight, was defeated by three-quarters of a length in the Victorian Championship, by a South Australian composite crew. The club's crew was - Rod Stewart (bow), Jeff Howard (2), Eric Schrader (3), John Harry (4), Doug Buchanan (5), Bruno Romanin (6), John Shanasy (7), David Palfreyman (stroke) and Martin Aitken (coxswain). The crew formed the basis of the Victorian King's Cup crew of that year with five representatives rowing in the crew plus coach and emergency.

The club, however, was not left without any senior Championship because Ken Leach, who had a particularly successful season winning eight senior sculling races, won the Victorian Sculling Championship.

Although the seniors were facing grave troubles, the club's junior and lightweight oarsmen were just beginning a period of success. The juniors' coach, Phil Cayzer, used his experience and enthusiasm to develop a strong crew which in the second half of the year won seven club races, together with the Victorian and Australian Junior Eight Championships. The crew of Tim Horkings (bow), Simon Butler (2), Peter Richter (3), David Parton (4), Alex Sloan (5), Terry Cremean (6), Stephen Shirrefs (7), Stephen Webster (stroke) and Adrian Maginn (coxswain), was reselected with only one change late in the next season and repeated its performances in the Victorian and Australian Junior Eight Championships. Four members of this crew were to go on to become Victorian representatives, with Adrian Maginn, Stephen Shirrefs and Alex Sloan to also become Australian representatives. Special mention must be made of Alex Sloan, who is the grandson of the great A. B. Sloan, and was able to emulate the excellence of his grandfather on the water and in club administration. 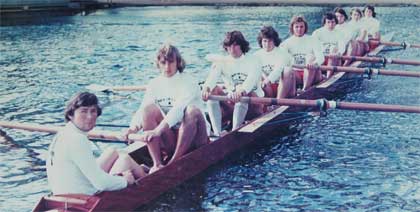 This season also signified the return of Mercantile as a power in Australian lightweight rowing, with the club's lightweight eight winning the Victorian and Australian Lightweight Eight Championships with the crew of Andrew Guerin (bow), Martin Owen (2), Tony Spriggins (3), Daryl Johns (4), Ian Duthie (5), Mike Kerin (6), Rod Stewart (7), Glenn Robertson-Smith (stroke), Tim McCoy (coxswain) and John Burford (coach). This crew was instrumental in Mercantile winning the lightweight premiership of that season and in providing a basis of considerable Mercantile success in lightweight events over the next four years.

Another category of rowing to gain considerable prominence in that season was youth rowing, which achieved Championship status with the Victorian Youth Four, and Australian Youth Eight Championships. Club member David Boykett was instrumental in the introduction of these new events and in Australia being represented for the first time at the 1973 World Junior Championship at Nottingham, England, by the successful Scotch College crew of that year.

The success of the 1973-74 season was due in part to a successful recruiting campaign undertaken by the club in that season. The initial doubts of the recruiting sub-committee in holding the recruiting evening in the burnt out shell of the clubhouse were unfounded. The club was able to recruit many promising oarsmen including every member of the successful 1973 Head of the River crew, Scotch College. The members of the crew, who had competed in the World Junior Championships, immediately gained seats in the club's senior, junior and lightweight eights, and several of them went on to become prominent in all levels of rowing as well as in the club's administration.

It was a credit to the club's administration and particularly to the young captain of this time, Martin Owen, that the club was still able to achieve success on the water despite the considerable effort of active members in assisting in rebuilding the clubhouse. The intense club loyalty and spirit that was developed in the many working parties overcame several of the impediments to success created by the club's commitment to the new clubhouse. 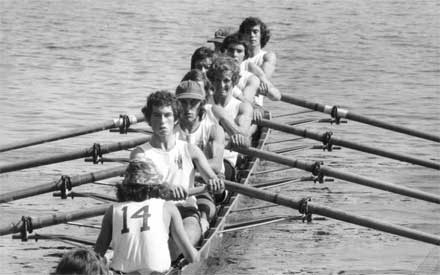 Socially, the club prospered during this period under the chairmanship of David Yunghanns, its most memorable evening being an Italian Night held in the half-built clubhouse. In the absence of the wooden first floor the cathedral-like surroundings provided an apt setting for the bacchanalian pursuits of the members and their guests.

When the clubhouse was completed and the club began settling down again into its settled pattern, rapid changes took place in Australian rowing which required the club to reconsider its position and policies in the sport of rowing. The increasing standard and professionalism of international competition and Australia's desire to remain competitive at this level, required the boating of representative crews on an annual basis at the World Championships. This policy of Australian rowing had profound effects on club and State rowing. At the club level most senior oarsmen were in consistent preparation for international competition which necessitated that they adopt a more individualistic approach to their rowing, sometimes to the detriment of their club's progress. This was demonstrated by the great number of composite crews competing, as opposed to solely club crews, and the increasing tendency of oarsmen to change clubs or even residence to row with the club most beneficial to the individual. Club competition often declined as individuals pursued their own paths and greater demands were made upon club supporters to finance international competitors. The more professional approach also filtered into the new classes of international competition for lightweights, women and youths which also had annual World Championships. It was a time when the oarsmen prospered at the expense of the clubs which formed the base of Australian rowing.

Other new demands on the clubs at this time came from the need for specialised equipment for the new international class of lightweight rowing and the increased need for coxless racing craft necessitated by the greater emphasis placed on this type of rowing by elite oarsmen.