Members of the club, many just returned from the King's Cup and National Regatta at Murray Bridge, were confronted with the devastating news that the club had been seriously damaged by fire on Sunday evening, May 6, 1973. The damage, though considerable enough, was not as serious as it could have been. The fire was started in the locker room and, fanned by a very strong north wind, quickly demolished the upper part of the old section of the clubhouse and practically everything in it. Fortunately, the fire brigade was quickly on the scene. Ignoring the hydrant which the club had been compelled to install at no little expense as part of the first rebuilding project, the brigade threw their hoses into the Yarra and pumped the river into the fire. This they did with such speed and effect that, despite the loss of the upper floor, walls and roof, the ground floor was left practically untouched by the fire. The fleet and oars of both the club and Brighton Grammar, apart from minor scorching, were unharmed. The new section of the club, though suffering severe smoke and water damage, was not structurally affected due to the strong wind blowing the fire towards the back of the club. The fire was deliberately lit by a youth who had broken into the premises and who was subsequently apprehended. 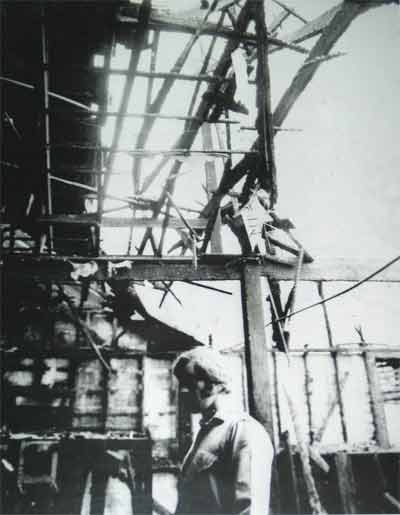 An urgent meeting of the committee and several senior members was called at the home of the captain, Martin Owen, on Wednesday, May 9. Much had to be done. Reinstatement of the building had to be planned, finance organised, insurance claims finalised, the interest of the club's tenant, Brighton Grammar School, considered, and above all, arrangements made for the housing of the fleet and the continued functioning of the club as an active and leading force in rowing and racing while all this was going on. Once again Bob Aitken found himself appointed to head a sub-committee to plan the rebuilding of the clubhouse. The subcommittee met at length on the following evening. It was then decided to form three groups, one to consider and recommend the extent of the new building and the facilities to be provided, the second to deal with the financial planning, and the third to organise the practical side of the job, the demolition, the renovation of the front section of the club and the extent to which club labour might be used to reduce the overall costs. These arrangements were endorsed by the general committee at its meeting on May 14.

The first major decision facing the committee was just how far the new building should extend. There were those who believed that the club should seize the opportunity and build immediately on both floors over the whole site thus more than doubling the space available at first floor level compared with the previous clubhouse. Others, particularly those who had been most closely involved with the financing of the first rebuilding venture, were seriously concerned that the club might not be able to finance such an ambitious programme or, if it could borrow sufficient for the purpose, that the interest and capital repayments might cripple the club financially for many years to come. Eventually the more conservative members, with some misgivings, gave into the optimism and enthusiasm of the young contingent and planning proceeded on the basis of building the full structure.

While the discussion was going on the insurance claim was finalised. The club's policy required the insurers to reinstate the building as it was. This was technically possible as the ground floor and foundations, such as they were, had suffered little damage, but whatever varying opinions members had on the size of the new structure, on one thing they were all in complete unanimity. They would not spend money on building new work on top of the old decaying ground floor. The insurers obtained quotations for reinstatement from several builders and offered the club the cash equivalent $27,756. A claim for $9,885.52 was lodged in respect of locker equipment and club fittings and in some cases members' personal belongings. This claim, with additional claim for the loss of the fire alarm circuits, was finally settled for $10,130.00, and probably represented a generous settlement on the part of the insurers. On the lighter side it was apparent that some members had been concealing in their lockers rowing gear and other items which had acquired almost "antique" value and if the fire achieved nothing else it caused certain Sunday morning oarsmen to appear in shorts and singlets which were white and clean in lieu of the picturesque and odiferous articles of 1940 and 1950 vintage in which they had been wont to row.

The Bank of New South Wales had to be approached and assistance, as always, was readily forthcoming. The Bank agreed to open a new building account and to allow the combined overdraft to return to $20,000.00. A second account was necessary because the original overdraft was for the War Memorial Club Room and donations directed to that work had to be identified as such to be tax deductable. The Bank also agreed to extend the combined limit to $25,000.00 if required and most importantly to accept as security individual guarantees by members rather than a joint and several guarantee. By the time of the fire the overdraft for the War Memorial Building Fund had been reduced to $14,261.00 so that the club had effectively an additional $6,000.00 and possibly $11,000.00 to spend on the building. The sub-committee was reluctant to go to the higher figure because of the interest and repayment commitment involved.

Two members, Peter Jones and Daryl Johns, both architects, offered their services to the club on a net cost basis. The sub-committee agreed to recommend their appointment and they immediately set about preparing sketch plans and estimates. In the event Daryl Johns moved to the country and the major work was undertaken by Peter Jones. His assistance and advice were invaluable.

By the next meeting of the general committee on June 11, the subcommittee was in a position to submit a full written report on the above matters together with approximate estimates for the work. The general committee agreed to the appointment of the architects and to the rebuilding over all five bays. It was then planned, subject to City Council approval, to build a concrete first floor over the three western bays and a wooden floor over the two eastern bays using the existing foundations and support structures most of which was new. This had the advantage both of saving costs and of leaving Brighton Grammar in partial occupation of its portion of the premises during rebuilding. Consideration was given by the sub-committee to the construction of a squash court. There was just enough room within the site but the subcommittee considered that the area required for a squash court would seriously restrict the space available for storing boats. It was also concerned whether the use of the court would justify construction and provide any financial return.

The architects' preliminary estimate of cost was $42,550.00. Reinstatement of the front section, replacement of equipment and fittings and architects and engineers fees were estimated to cost another $10,000.00. To provide the total required the committee had available:

leaving about $8,000.00 to be raised by further donations from members and special efforts. The committee considered this a practical target to achieve. The planning sub-committees were dissolved and a new sub-committee chaired by Norman Cairnes was appointed to handle the project. The job was underway.

The new building committee wasted no time. Following further estimates and discussions with the architects it was decided that concrete floors at first floor level were an expense the club could not afford. Plans were prepared for the construction of a wholly timber floor and approval in principal to the general concept was obtained from the Melbourne City Council. After careful consideration the architects recommended that it would be cheaper and easier to remove the recently constructed Brighton Grammar section than to build over and around it. This was approved and Brighton Grammar gave full co-operation although it was not in any way legally obliged to vacate their part of the premises, which structurally was intact.