The early 1970's were years when world affairs tended to become steadily more turbulent and uncertain.

Mercantile Rowing Club in the 1970-71 season seemed to share this malaise. It had its worst performance in many years, winning not a single club championship or premiership, and failing to recruit a significant number of good maiden and junior oarsmen. As the annual report for that season put it:
''... the results on the river have left a lot to be desired ... it would be naive to allow (the re-building programme) to be cited as an excuse. We have failed ... to recruit adequately. We are the inheritors of a past that has no parallel in Australian rowing, and we owe it to our successors to make sure that the club again resumes its rightful place at the top . . ."

Results in the next two seasons were improved somewhat, but were achieved only by greater effort on the part of the nucleus of oarsmen and administrators that had performed so well in the late 1960's. Despite the warning of the 1971 report, nothing was done to lay a firm basis for performance in the rest of the decade.

The early part of the 1970-71 club racing season was conducted without the services of Graeme Boykett, David Douglas, Stephen Gillon and John Shanasy, all of whom had represented Australia at the World Championships in St. Catharines in early September, 1970. These oarsmen, in fact, did not make themselves available until the Footscray regatta in late January, 1971. The club could manage only six wins in seven pre-Christmas regattas, and these were confined to the Open/Senior Four of Mike Kerin, Les Ayres, Peter Philp and John Harry, the Senior Pair of Philp and Kerin, and the Junior Four of Roger Redman, Bruce Adam, Jamie Fitzpatrick and John Gumley. Martin Tomanovits was the coach of senior crews, and Ken McConville of the junior.

Ten races in Novice, Maiden and Senior divisions were won over the Christmas series where John Burford and Roger Wilson were again generous with their time in ably organising the Christmas camps.

The Footscray regatta in January saw the club at full strength for the first time in the season. The Senior Eight consisted of Kerin, Gillon, Douglas, Fitzpatrick, Harry, Boykett, Shanasy and Palfreyman. It was steered by Adrian Maginn and coached by David Boykett. The Eight won well on the short course against Monash University, although the Monash Senior Four easily beat Mercantile's Four of Gillon, Douglas, Harry and Boykett. The only other win at this regatta was in the Maiden Four.

Even though the Eight had got off to a good start, all was not well. The St. Catharines contingent was unfit and probably complacent, particularly as it was boated in the brand-new Karlish bought by David Boykett for the club. More importantly, though, the crew was showing signs of raggedness after early speed, which was to tell in the longer races.

The Senior Eight for the next regatta, Victorian Universities, was unchanged, and the crew again won from Monash and Yarra Yarra in a close race. No other club crew won. For the Albert Park Regatta Peter Philp and Les Ayres came into the crew. Once again, the crew won but Monash and Yarra were making ground very rapidly towards the finish. Both of these crews had now emerged as threats, particularly Yarra, which was coached now by Hubert Frederico, and contained some young, but formidably talented oarsmen.

The day of reckoning for the club came at Colac the next week. The course was as usual very heavy. Mercantile's Eight once again leapt away to a length lead in the first two hundred metres, but after striking the roughest section and shipping a good deal of water, was overhauled and soundly beaten by the Monash Eight.

The club's Eight was beaten at all three of the following regattas - Ballarat, Henley and Barwon, although Stephen Gillon and Graeme Boykett won Senior Pair at Ballarat and Henley.

The only other successful Mercantile crew at those fixtures was Martin Tomanovits' Maiden Eight, and the club's sculler Ken Leach. The interest in senior rowing now lay on the contest between Monash and Yarra. Yarra, after a disappointing early season, beat Monash easily at Henley, and appeared to have the State title sewn up. Monash, however, came back to beat them the next week at Barwon by a narrow margin.

The Victorian titles were held on March 8, 1971, at Ballarat on a glorious still day. The Eight's race was held as a first and final, and the Mercantile crew set out determined to turn the tables. This was one of the closest and best battles in Victorian rowing history. Nothing separated Monash, Yarra, Melbourne University, Lindisfarne and Mercantile for 800 metres, when Lindisfarne crept out a canvas. Monash was 1/3 length behind Lindisfarne with 600 metres to go, with the others still dead level a further canvas behind. Monash then gathered up the Tasmanians gradually, and passed them to win by four feet in the last stroke in the good time of 5.59.1. Melbourne University was third a canvas behind Monash, with Yarra and Mercantile fourth and fifth only a few feet further back. No more than half a length covered the field on the line. Monash's win secured the senior premiership and gave them a clean sweep of the Senior Eight, Four and Pair championships.

The Monash coach Roger Moore was immediately appointed coach of the State crew; and the Mercantile nucleus which had powered the State Eight's since 1967 was parted. Boykett and Douglas were selected but Gillon and Harry were dropped.

The only bright spot for the club on that day was Ken Leach's great win in the Sculls Championship by 1/2 length from Jeff Sykes of Corio Bay. 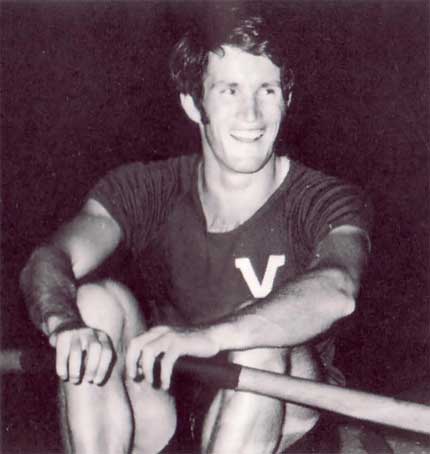 The rowing season saw another development of considerable interest for the future - the breakthrough of Melbourne University as a force in lightweight rowing. M.U.B.C. was a consistent winner in the Eights and Fours in this class, and won both championships. This period was clearly of great importance in moulding the approach with carried Australia to gold medal standard in International lightweight fours in 1974.

The 1971 King's Cup crew trained with great speed and confidence and although beaten in its heat on the Canning in Perth by New South Wales, won the repechage and then narrowly defeated South Australia in the final in blustery conditions. Unfortunately for the club, Ken Leach lost the President's Cup to Norm Talbot of South Australia by 2.6 seconds. This was especially disappointing, as Ken had beaten Norm well in the Victorian titles.

Club races were as usual well contested in 1970-71. The usual "hard core" did most of the winning - these included Martin Owen, Adrian Maginn, Peter Philp and Dick Garrard - who won both the Sprigg and Stonk-Moose Time Trials. The club's social functions were typically well attended, although the annual dinner was abandoned because the rebuilding was incomplete and no other venue was deemed appropriate.