Season 1965-66 started with a large group of dedicated young oarsmen training enthusiastically in the club gymnasium during the week and rowing in scratch eights on Sundays. It was an impressive sight shortly before noon each Sunday to see four Mercantile eights parading past the clubhouse with each crew trying to lead the flotilla. But the young Mercantile Senior Eight was faced with a formidable task to defeat the powerful and experienced Banks Eight.

David Palfreyman was promoted to stroke the Senior Eight, with experienced support at seven and six from Martin Tomanovits and David Boykett. Other newcomers in the crew were David's younger brother, Graeme Boykett and Steve Gillon (promoted from a maiden four). Peter Philp, Dick Garrard and Mal McKenzie made up the crew which was coxed by Tom Daffy and coached by Hubert Frederico.

The relatively inexperienced crew was defeated by a large margin by New Zealand and Banks in an international race at Ballarat, but showed improvement to defeat Banks at the ensuing Victorian Rowing Association and Upper Yarra Regattas. In the last two weeks before the Championships the Mercantile crew had the boat moving very quickly indeed, and those who watched the crew in training were confident of its success.

The State Championship was a debacle. In the days before coxswains were equipped with loudspeaker systems, Mercantile had a set of bells installed in the boat, largely to assist the Boykett brothers who were hard of hearing. A defect developed in the system. Mercantile, having sent a message to the starter, delayed to effect repairs. The crew arrived at the start as the other crews were coming into line, but later than the appointed time for the start. Instead of penalising Mercantile by one false start, as would now be the case, the starter directed that Mercantile be excluded from the race. And excluded they were. While Mercantile had a race on its own around the outside of the reeds, Banks comfortably defeated the other entrants.

The State selectors, Lloyd Williams and Ron March, had closely watched the Banks and Mercantile crews in training. They did not immediately announce the appointment of a coach for the King's Cup crew, but requested Banks and Mercantile to row a test race on the Yarra on the following Monday evening. Both clubs initially agreed to do so. Mercantile rowed up to the start, but Banks did not appear. It was then announced that the Banks committee had withdrawn its crew.

Further sensation followed when the State selectors appointed Hubert Frederico as coach, and a crew made up of Mercantile and Banks oarsmen and John Stuckey, of Essendon. Banks replied by withdrawing all of its members from the team, and demanding the appointment of Alan Jacobsen as coach. The State selectors stood their ground, and replaced the Banks men in the selected crew with other oarsmen from Mercantile and John Castle and Rob Jones from Yarra Yarra Rowing Club. 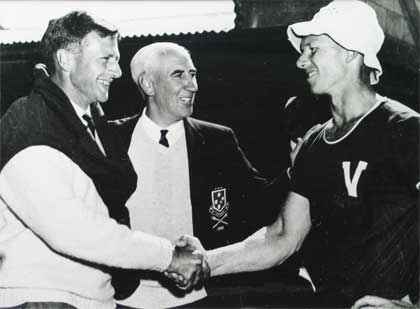 The tumult died abruptly when the Victorian crew, brilliantly stroked by David Boykett came from behind to win the King's Cup at Franklin, Tasmania, by three feet from New South Wales, with the early leaders, South Australia, close up in third place. Victoria was selected to represent Australia in the Second World Rowing Championships at Bled, Yugoslavia, and Banks then permitted its members to join the crew. Paul Guest and David Ramage were included in the crew which raced overseas. Mercantile members were the Boykett brothers, Tomanovits and McKenzie with Gillon as reserve, Daffy as cox and Frederico as coach. The crew raced disappointingly in the U.S.A. championships at Philadelphia, but raced well in Yugoslavia, being relegated to the Petit Finale as a result of a narrow defeat by New Zealand in the semi-final.

Meanwhile, Garrard, Palfreyman and Philp, senior oarsmen who had missed selection in the Australian eight, formed themselves into a coxless four, won the Australian title, and gained Australian representation. With experience gained from racing at Royal Henley Regatta in England, and at Copenhagen, they developed into an extremely fast crew, and were unlucky to be eliminated in the repechage in a photo-finish. David Palfreyman described the winning margin as a bee's dick, an expression which has now become proverbial.

The long winter months of training were also worthwhile for our lightweights. Former Mercantile coxswains had a tendency to develop into good oarsmen, and on this occasion Penry Green, supported by Peter Downey at seven and coached by Michael McKenna, stroked the Lightweight Eight to its third successive success in the National Championships.