By 1960 the club again was building up a nucleus of good lightweight oarsmen and a very successful four stroked by Paul Harding managed to win the Champion Lightweight Fours in December, 1959, and gain selection as a crew for the Penrith Cup in 1960. Unfortunately, Western Australia, again coached by an old Mercantilian, Dr. Jim Pannell, took the Penrith Cup for the second year running.

There were several changes too in the Victorian Rowing Calendar during this period. In March, 1957, Hawthorn Rowing Club introduced the "Head of the Yarra" the popular time trial from Princes Bridge to Hawthorn, which now draws such a large entry of club and school crews. Mercantile took the event for the first two years. In 1959, Mercantile again won the Open section, but had to concede overall success to Scotch College, which won the Schools division and took the fastest time. 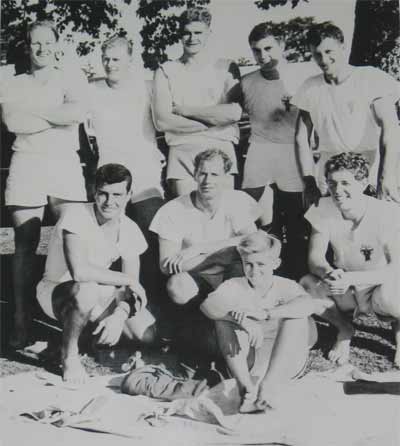 On April 4, 1959, the club and Scotch College joined to establish the Scotch-Mercantile Regatta. The objective was to provide school crews with more opportunity for racing in open competition and to give club crews an additional qualifying regatta during the latter part of the season. Bob Aitken and Ewen Davidson from Scotch College initiated the Regatta and have been on the organizing committee ever since. The Regatta, as is well known, has grown enormously over the years. One may question the president's confident and sweeping annual assertion that it is "the largest regatta in the southern hemisphere", (some day in a burst of enthusiasm he may yet claim global supremacy), but there is no doubt of its success and this has, in no small measure, been due to the competence and efficiency of Bill Bradshaw, the organising secretary, since its inception.

During the period covered by this chapter the long standing arrangement whereby as many as six Scotch eights boated from the club during the last three or four weeks of training for the Head of the River gradually came to an end. The advent of motor boats for coaching removed one of the reasons for bringing the Scotch crews to town, and when Scotch College built an additional boat house alongside the existing inadequate structure in the school grounds at Hawthorn, the arrangement ceased altogether. The close affiliation over the years had meant that most old Scotch oarsmen graduated to Mercantile, with great benefit to the club, but it also placed a severe strain on the club's rack space, particularly as the club had started to sponsor rowing at Brighton Grammar School.

A chapter on these years of the club's activities would not be complete without some reference to finance. The position was, as it always had been, and still is, difficult. Club revenue from normal sources just about balanced expenditure. Funds for new equipment came mostly from donations, a situation which is no novelty to treasurers of today. Funds for major clubhouse repairs were non-existent. The subscription was raised to £4.4.0 in 1949 and to £5.5.0 in 1956. The annual report of 1958 records with concern that a new eight cost £670 and a new set of oars £100. Two subscriptions would buy an oar, about 120 subscriptions would cover an eight. Apply this formula to present day costs and one can see the problems of "concern" in 1958 have become problems of survival in 1980.

The 1956-1960 years were, as already mentioned, ones of keen competition and considerable success in senior rowing. Many of the clubs' competitive senior oarsmen, with the Melbourne Olympics fresh in their minds, had aspirations of a billet in the Olympic team for Rome. The club was fortunate in finding a useful combination in senior fours as well as in the eights. Bob Lee, Graeme McCall, Bill Arnold and Geoff Taylor, with Rodney Davies as cox, won the Champion Fours on the Barwon in December, 1957, by a very narrow margin. This combination won all the remaining four oared events for the season including the Stewards Challenge Cup at Henley, while also successfully contesting the eights and with "Freddy" Frederico in the bow seat and Chris Newman as cox again took the Champion Fours title in December, 1958. A venture to Sydney to contest the New South Wales four-oared title in December, 1958, proved unsuccessful by a matter of feet. The race was rowed on Mosman's Killarney course on Middle Harbour, a difficult course to steer for those unfamiliar with it, and there is no doubt that this factor cost Mercantile the title. 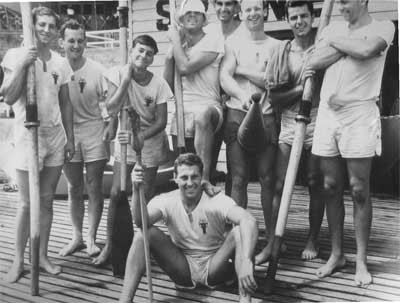 Success in the senior division during these years brought with it strong representation in each King's Cup crew. In 1957 the crew was predominantly from University with Lloyd Williams as coach. Hubert Frederico, David Boykett and Brian Dawes from Mercantile were in the crew and Jack Morganti was emergency. This crew was successful in Brisbane. A vigorous crew, stroked by Geoff Taylor, won the race at Penrith in 1958. The club again was represented in the crew by Geoff Taylor, Jack Morganti, David Boykett and Hubert Frederico with Rodney Davies cox, Bill Arnold as emergency, and Bob Aitken as coach.

At the beginning of that season Lloyd Williams coached a composite crew in a test race for selection for the 1958 Commonwealth and Empire Games at Cardiff in Wales. The race, conducted on Lake Wendouree, was won by a New South Wales crew, drawn mainly from the Mosman Rowing Club, and no club or Victorian oarsmen were selected in the team.

Victoria set out for the King's Cup in Perth in 1959 with high hopes of repeating the 1958 performance and preparing then for a successful season in 1960, leading up to the Olympic Games in Rome. There were five Mercantile members in the crew, Geoff Taylor, Bill Arnold, Graeme McCall, David Boykett, and Hubert Frederico, with Bob Aitken as coach. Prospects looked good but unfortunately almost every member of the team caught a virus in the plane going to Perth and most were laid up for one or more days. For a couple of outings several Victorians on holiday in Perth for the regatta were pressed into service to make up a crew and thereby achieved an unexpected row in a Victorian singlet. Lack of condition told and Victoria, after leading for the first mile, could not see out the distance. The crew was passed by New South Wales and relegated to second place.

This was to be the last three mile King's Cup Race. Since 1956, there had been strong pressure on the Australian Amateur Rowing Council, particularly from Victoria and New South Wales, to reduce the distance of the interstate race to the Olympic course of 2,000 metres. Mercantile were strong supporters of the change. This move was prompted not only by a desire to conform with International standards but also by the need to eliminate the hopelessly unfair courses on which the three mile race had to be rowed. Penrith was the only course which could provide three miles of water where reasonably calm and fair conditions might be assured. The Hamilton Reach in Brisbane, the Swan in Perth, the Derwent in Hobart and the Murray at Murray Bridge, provided admirable water in calm conditions, but with six crews abreast in any sort of wind, one side was inevitably favoured and at worst, there was a risk of sinking. The Lower Yarra course starting at the junction of the Yarra and the Maribyrnong and finishing below the Spencer Street Bridge, was unlikely to provide reasonable or fair water in any conditions.

The debate went on at each Council Meeting from 1957 until 1960. It was a protracted struggle as a number of the States were not only very conservative in their approach but were represented at the Council by delegates of similar views, several of whom had represented their States since the Council was formed in 1925. It was also not without its lighter moments. In 1957 the club had two members attending the Council Meeting in Brisbane, Mick Williams, the Victorian delegate, a dyed-inthe-wool three mile man, was instructed to move on behalf of Victoria for adoption of 2,000 metres, while Bob Aitken one of the leading protagonists of the shorter course, acting as proxy delegate for Western Australia, had clear instructions to vote for three miles. Debate was not prolonged. Eventually, sufficient States were persuaded by the time of the meeting in Launceston in 1960 and the Council then voted to reduce the distance of both the King's Cup and President's Cup permanently to 2,000 metres.

It is interesting to note in passing that there was then no decision to row the race in heats. In fact, in Adelaide in 1961, the race was a first and final. Heats were next rowed in Melbourne in 1962 simply because the course at Lake Wendouree was then too narrow to race six crews abreast. The practice was continued until 1979.

The race in Launceston in 1960 was, in any event, to be over 2,000 metres because it was the test race for Olympic representation in Rome.

Mercantile again had won the Champion Eights rowed at Ballarat in December, 1959, in preparation for an early King's Cup in March, 1960. Again, there were five Mercantile members, Geoff Taylor, Bill Arnold, Graeme McCall, Martin Tomanovits and Hubert Frederico, in the crew striving for Olympic representation. Chris Newman of Mercantile was cox and Bob Aitken coach. The race was rowed on the Tamar at Launceston where the river rose and fell with the tide some 8 to 10 feet. Some parts of the course were dry land at low tide. Western Australia won the race convincingly and received the coveted representation for Rome. No one can say what part, if any, the course played in the result, but the Victorian crew, in the shallow water, did not perform to expectations, and finished in third place. 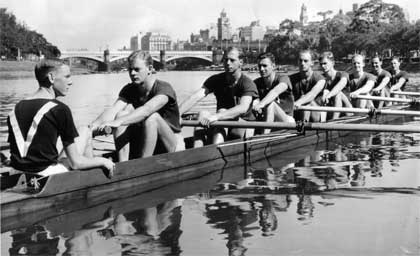 Later in the season test races were held for the small boat selection for the team to Rome. Mercantile entered crews in each event. A four with coxswain was narrowly defeated by New South Wales and no other crew reached the final.

Despite high hopes and much endeavour, no Mercantilian secured a position in the Rome Olympic team and the club licked its wounds and set about making its mark on the domestic scene with the opening of the 1961-62 rowing season.