It is appropriate to consider as the next phase of the club's history the four year period leading up to the Rome Olympics. The visit of so many international oarsmen to Ballarat in 1956 had opened new vistas to competing oarsmen and there were many coming up through the ranks who had aspirations of competing on Lake Albano outside Rome in 1960.

Not surprisingly, a number of the club's top oarsmen retired after 1956 and there were also changes in administration. Bob Aitken who had remained as captain at the 1956 annual meeting so that he might hold that office during the Olympics, resigned in December and his place was taken by the vice-captain, Vic Sharp, who had for a number of years been prominent in lightweight ranks. There were plenty of members both young and old ready to assist. Generally, there was a tendency, which has continued to the present time, for the active members associated with the club administration to become younger. This was probably due to the fact that in the 10 or so years following 1945 most of those holding office in the club had come back from four or five years of war service, but as that group became less active they were replaced by men not long from school or university or of comparable age. This fact alone tended to make the task of running the club more difficult. Quite apart from growing problems of finance, fleet and boathouse maintenance, there was the task of maintaining interest and enthusiasm among young members who were coming to have, and have the means to enjoy, a wider variety of interests.

These problems were not perhaps as serious as they are today and Vic Sharp and his committee set out to win races for Mercantile in 1956-57. Ample young oarsmen were available to fill the vacant seats in the Senior Eight and a number of those selected in 1957 formed the nucleus of the club's top crews until 1960.

The membership roll had been increasing gradually over the preceding decade. Following the quick build up after the war years, the numbers enrolled dropped back slightly to approximately 240 in the late 1940's and increased gradually until they reached 300 for the first time in 1960. There was, however, a significant change in the composition of the membership. At the close of 1947 there were only 23 junior members out of a total of 237. The number remained fairly constant during the early 1950's at between 30 and 40, but in the period covered by this chapter, due probably to a younger administration, active recruiting and the immense success of the preceding years, the number of young oarsmen aspiring to row for Mercantile increased rapidly and by 1960 the junior membership had reached 85, over a quarter of the membership. This significant change was reflected by a change in the constitution in 1959 to allow two junior members to be eligible for election to the committee. This change was also to some extent reflected in the fleet. With a younger membership there was less social rowing. Gone were the Sunday mornings when the club would boat three or four eights of vintage weekend oarsmen and gone too were most of the old practice boats in which they had rowed. The racing fleet was made up of four eights, three fours and three pairs. There were three tub fours and a like number of tub pairs and a couple of practice eights and fours, all kept in moderate condition by the voluntary efforts of the members.

The maintenance of the clubhouse was still a formidable problem for the committee entering the 1956-57 season. In the previous year the front of the shed which had been gradually sinking into the Yarra Bank mud had been lifted, levelled and the front pillars supported on a concrete platform laid right across the front of the shed. A great deal of the timber flooring, always a fire risk, also had been replaced by concrete. Apart from these major renovations, only minor repairs and painting had been undertaken and the old structure year by year increased its appearance of elegant and elderly decay.

A serious problem facing the club and other Princes Bridge clubs at that time was a renewed suggestion by the City Council that the clubhouses were an eyesore and a discredit to the City and should be removed elsewhere. Some of our city fathers considered that beds of roses and dahlias might be of more value to the citizens of Melbourne than facilities for an active sport. The proposal was dropped on this occasion after considerable lobbying in the proper quarters. It was not the first time it had arisen nor was it to be the last, and the threat of possible eviction - all clubs had then, as now, only a three year lease - was a discouragement to any proposal for long term replacement of the club-house.

In the senior division the seasons 1957 to 1960 were years of success although not perhaps quite on the scale of the preceding period. Senior oarsmen from 1956 such as David Boykett, Brian Dawes, Jack Morganti and Hubert Frederico were joined by Geoff Taylor, Graeme McCall, Bill Arnold, in the senior eight, with keen competition from Ian Wilson, Hugh Wallace Mitchell and others for the remaining places. Jack Shears was senior coach at the start of the season, while Norm Cairnes and Bob Aitken later shared the task. 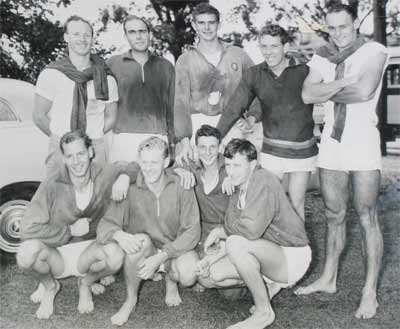 The main rivalry in senior rowing during this period was with the Melbourne University Boat Club, then coached by Mercantile member, Lloyd Williams. The two clubs had many spirited contests, particularly in eight-oared events. In small boats Albert Park was still a force to be reckoned with and that club amassed sufficient points in fours and pairs to take the Premiership again in 1956-57. It was no inconsiderable achievement to win two senior Premierships and share in a third in four years without winning an eight-oared race.

Mercantile won the Senior Premiership from Melbourne University in the following three years and these two clubs provided most of the King's Cup crew during the four year period with the exception of that remarkable oarsman from Preston Rowing Club, and subsequently Banks, Neville Howell, who started his career in interstate eights in 1951 and held a place almost every year until 1962 even though during much of that time his club was not a force in senior rowing. But more of this shortly.

In sculling races the club had been singularly inactive for some years. In fact no win had been recorded since John Williams won the Champion sculls and the Champion 2,000 metre sculls in 1949. However, Ian Wilson devoted his energies to sculling in 1957 and 1958 and won a number of races from novice to senior. In the latter year, he crossed the line first in the Champion Sculls on the Barwon. Unfortunately, his steering incurred the displeasure of the umpire, Tom Rodda, and earned him disqualification.

In junior and lightweight rowing this period of the club's history was not to match the success of previous years. While a number of good wins were recorded, no Premiership Certificates adorned the club walls and in several of those years the tally of Premiership points won was a dismal reflection of the club's prowess on the water or rather the lack of it. In the four year period, the club achieved in Junior and Lightweight ranks, only two Championship wins, the Junior Fours in 1959 and the Lightweight Fours in 1960. Success was evenly spread among the clubs as the Premiership Table for the four year period shows clearly.

These, however, were again to prove years of building and the club was ready to leap to the fore in Junior and Lightweight ranks in the 1960's. Faces still familiar round the club were beginning to appear in these divisions, such as Paul Harding, Ken Hume, among the Lightweights, Simon Newcomb, Chris de Guingand, David Yunghanns and Ron Negri among the Juniors, to name but a few. The name of Bill Wallace also began to appear among the successful coaches. 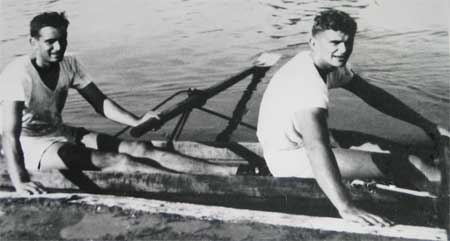 The King's Cup Regatta at Penrith in 1958 saw the first step to extending the range of interstate contests. Until that year there had only been two events, the King's Cup over three miles for eights, and the President's Cup over 21/2 miles for sculls. Except for 1956, when the events were raced in heats over 2,000 metres, as Olympic Trials, the races had always been first and final. In 1958 a Lightweight coxed four event was introduced for a trophy donated by the Penrith City Council. For many years the Victorian Rowing Association was not in a financial position to support the Lightweight four which had to provide its own boat and bear most of its expenses. Victoria won the first Penrith Cup in 1958 with a crew from South Melbourne Rowing Club. Western Australia was successful in