The November regatta in 1955 opened a season of intense interest to oarsmen, for the results of the season and the King's Cup selection would open the way to selection for the team in the Melbourne Olympics. The King's Cup was to be the vital race. All senior events were cancelled for the season. Open races were substituted, and composite crews permitted for the first time so that no oarsman who wished to compete and vie for selection need be concerned about loss of status.

Norman Cairnes had retired from the position of Senior coach. His place was taken by Bob Aitken who, since giving up active rowing, had coached with success first lightweight and then junior crews. The club's open eight continued its run of success but late in the season met strong and consistent opposition from the Melbourne University Boat Club. After winning the Championship in February, and subsequent regattas at Ballarat and Barwon, Mercantile were finally beaten by Melbourne University at Henley in March, 1956, by one foot, thus losing the Grand Challenge Cup for the first time for six years and suffering its first defeat in a major eight oared race since March, 1951.

Nevertheless, the successes of the season were sufficient to decide the selectors to appoint Bob Aitken as coach of the King's Cup crew and to include four Mercantilians in that crew. This crew went on to win the King's Cup convincingly on Lake Wendouree and from that win followed the appointment of Bob Aitken as coach and sole selector of the Olympic Eight. Several oarsmen from New South Wales were tried in the crew and one, Fred Benfield, finally was selected. Mercantile respresentatives in the crew were Brian Doyle (stroke) Garth Manton (5), David Boykett (2), Neil Hewitt (cox) and Brian Dawes and Jack Morganti (emergencies). 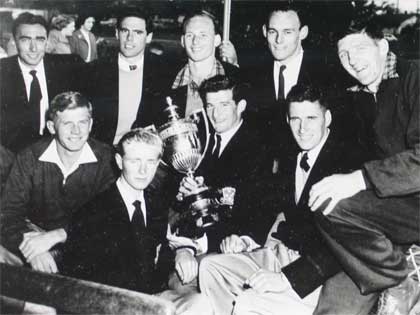 Australia has raced in many Olympics and World Championships since 1956 and many members of the club have been honoured with Australian selection. The 1956 Olympic team was no more successful or significant than those which followed it except perhaps for one or two aspects. First of all the 1956 Olympics, being in Melbourne, attracted more interest both among oarsmen and the public generally than has been the case with later events. Secondly, until that time the ultimate goal of successful oarsmen had always been thought to be the King's Cup crew. International representation was so far beyond the aspiration of most senior oarsmen that they did not consider it as a serious possibility. It did not really enter into their plans or even contemplation. The conduct of regattas in heats, repechage and final was also a new concept. Australian crews until then had always been trained to win, if possible, at every start and in the event, in 1956, our eight won the wrong race, the heat instead of the final; circumstances which have since been repeated. Finally, 1956 was probably the first time in Victoria when serious out of boat training was undertaken. Stan Nicholls, who had been so closely associated with later Australian crews, planned a programme of weight and gymnasium training, mild perhaps compared with later years, but still an innovation to oarsmen and coaches of the time.

Test races for small boat races at the Melbourne Olympics were conducted on Lake Wendouree in 1956. Mercantile entered crews in several events but were not successful in having any other members selected.

History has recorded that Australia achieved a bronze medal in the eights, a great disappointment after a convincing heat win over the same opponents, but nevertheless, for those members who were in the team, and to the club itself, a not unfitting conclusion to a highly successful period of the club's history.

Australian crews and scullers reached the finals in five of the seven events at the Melbourne Olympics, and on the Ballarat course in 1956 only four lanes were used in each event. Stuart Mackenzie won a silver medal in the single sculls, Mervyn Wood and Murray Riley from Sydney Rowing Club took third place in the double sculls, Peter Raper and Maurie Grace from Mosman were fourth in the coxswainless pair and a combination from Albert Park, Gordon Cowey, Kevin McMahon, Ron Libbis and Ian Allen were similarly placed in the coxed four.

Norman Cairnes was course manager for the Olympic regatta, with Tom Rodda and Geoff Taylor from Ballarat as his assistants. He was also secretary to the Rowing Organizing Committee. Jack Mounsey, "Beef" Calder, Jack Hoppe, Deane Morgan, Dave Stirling and Roy Thursfield were the other club members who participated in the Olympic regatta in official or administrative positions. 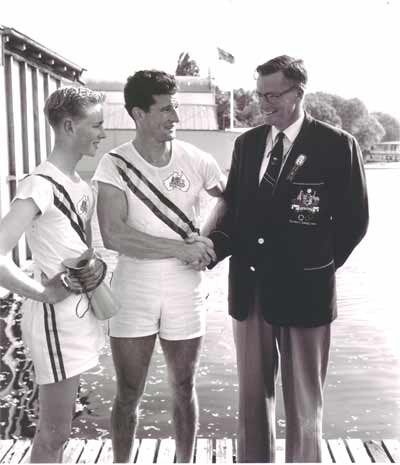 The boat used by the Australian Eight was provided by Mercantile. It was built for the event at Abbotsford in New South Wales by the boat building business established by Gus Green and later taken over by Sargent and Burton and carried the name of "J. Sprigg". Though noticably different from the Pocock boats used by the Americans and Canadians, it was not thought to be inferior. The oars were made by Alan Sykes (father of Jeff Sykes) of Geelong. Senior oarsmen of today will wonder at the fact that these oars were only 11 feet 11 inches long with 3 feet 8 1/2 inches inboard and a blade 6 1/2 inches wide. The Americans and most continental crews were using 12 feet 1 inch oars, but the Americans had only 3 feet 7 inch inboard. The Melbourne Olympics saw for the first time the use of tandem rigging in two Italian Fours, and a bow steered pair from West Germany.

The most revolutionary craft brought to Melbourne was an eight from Sweden which, in the end, the crew did not use. This boat was only 48 feet long and the hull shape was almost rectangular instead of rounded. Overall it was much lighter than eights then in general use. In theory the boat was supposed to plane when brought to top racing speed, thus giving it an unbeatable advantage over conventional boats. In fact, it was never seen to plane. A number of club members arranged to borrow a similar boat which the Swedish team took to Rome in 1960. They, with members of the Australian team, rowed it up and down the course at Lake Albano on the morning of the finals (such was the carefree attitude then prevailing) but could not achieve anything but a large bow wave. A boat of this design has not since appeared and the possibility of a planing eight remains a theory only.

Mercantile also participated in the social programme of the Olympic Games. The club took the whole of the accommodation of the Western Hotel and used it as club headquarters for the duration of the Games.

The club entertained there the coaches, managers and supporters of all visiting teams who cared to attend. The official programme listed a party to be hosted by "Les Rameurs Mercantiles" and that party and the close and informal atmosphere in which the whole of the rowing section of the 1956 Games was conducted forged many friendships which Mercantile members have preserved and valued ever since. The atmosphere at Ballarat was reproduced again at Lake Karapiro, New Zealand, in 1978, although at Ballarat everyone, teams and supporters, were living in the one city and mixed more freely both at the course and away from it.

While the emphasis in the season leading up to the Melbourne Olympics was undoubtedly on senior rowing, the club's other activities proceeded with their usual vigour, if not with all the success which might have been desired. Mercantile finished second to Albert Park in the Junior Premiership and to South Melbourne in the Lightweight Premiership. No Championship wins were recorded except for the Champion Eight and Fours but this latter event is worthy of record. The crew was a composite one comprising the two emergencies for the King's Cup crew, Brian Dawes, of Mercantile, and John Hunt, of University, Hubert Frederico and Ron Richardson. Ron although weighing well under ten stone, stroked his crew to a comfortable victory.

Social activities of the club during the period covered by this chapter continued as in the past with post regatta functions at the club and winter dances, all well supported. The annual report of 1956, however, records the introduction of barbeques as a means of raising money for the club.

Several of those early barbeques were enlivened by the burning, in spectacular fashion, of old practice eights which had been scrapped. And at one, in 1956, members were delighted to welcome a number of Olympic visitors, including Dr. Walter Wulfing, vice-president of the German Rowing Federation. The club was pleased to have added the word "barbeque" to Dr. Wulfing's English vocabulary and to have given him a new form of entertainment which possibly he may have later developed at home.

Whatever may have been the fund raising possibilities of barbeques, they did not substantially ease the club's financial problems. Fleet maintenance was of necessity mainly carried out through these years by those who regularly attended the Wednesday night winter working bees. By 1956 it was found necessary again to raise the subscription, this time to £5.5.0, the figure so vociferously sought by Lindsay Fairbairn six years earlier. With that small boost in revenue the club started the next chapter of its activities.