The club opened the 1952-53 season with five wins at the V.R.A. regatta in November and this was to prove one of the most successful years on the water which the club has ever enjoyed. The Senior eight, little changed from the previous year, again went through the season undefeated taking the Championship and again forming a large part of the King's Cup crew. Herbie Shears was the senior coach for the season. The club was fortunate in having enough senior oarsmen to boat a separate senior eight and four in the November regattas. Both were successful and there was naturally some rivalry when the time came to select the Champion four to race in December. The unbeaten four considered itself entitled to nomination. The eight and its coach strongly believed that a better four could be found from among their ranks. The selectors found a solution in ordering a test race. In this trial the four from the eight, having conceded to their opponents choice of boat oars and station won comfortably and went on to take the Championship. 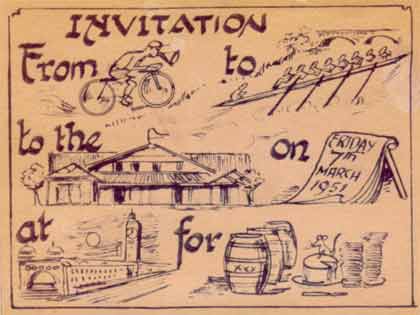 1951 Norm Cairns Invitation To His Crew

Junior crews recorded many successes including the Champion Junior eights and the Lightweights continued their winning run, particularly in fours. Space will not allow the enumeration of all those Junior and Lightweight oarsmen who were prominent during the season. From the Junior ranks Brian Dawes and Jack Morganti were two who later made their mark in Senior rowing. Ron Richardson, Alan Kohn, Vic Sharp, Alan Batiste, Colin Lewis, Bill Morrison, Bill White, John Robertson and Dave Crichton contributed consistently to Lightweight successes. Norm Cairnes coached the Junior crews and George Robertson most of the winning Lightweight fours.

In all 87 crews faced the starter in season 1952-53. Of these 47 were successful. Between them they won the three Premierships, Senior Junior and Lightweight and by a large margin. A total of only 49 men raced for the club during the season in all divisions from novice to senior, but their record of success was phenomenal. 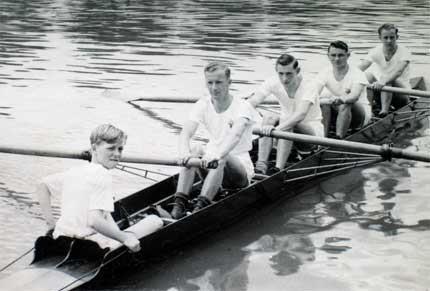 The season ended with a win in the King's Cup over three miles on the Swan River in Perth. Herbie Shears had been appointed coach. The crew was the same as that which represented Victoria so successfully in the previous year, except that John Hall of Melbourne University replaced Harry Duncan, who had taken to farming in Western Australia.

It is perhaps understandable that the results of season 1952-53 could not be continuously repeated. Indeed, many sage heads along the river bank contended that so much success by one club was not in the best interests of the sport. This view which, on later reflection, may have had some substance in theory was not one which Mercantile oarsmen of the day were prepared to support in practice. They went out to win and win they did.

Bob Aitken and George Barrett dropped out of senior rowing after the King's Cup in Perth in 1953. Brian Doyle moved down to the stroke seat of the Senior eight a position which he held until the Melbourne Olympics. He was ably backed up by new blood from the Junior ranks, Garth Manton, Brian Dawes and Jack Morganti, to name but a few. Lloyd Williams, a former New South Wales oarsman recently returned to Australia from Oxford, also earned a place in the crew. The unbroken record of success in senior eights achieved over the previous two seasons was continued and the club did not lose a senior eight oared event between the V.R.A. regatta in November, 1951, and the Mildura regatta in 1955 - 25 consecutive wins in all. These consistent successes earned the club strong representation in the King's Cup crew in 1954 and 1955 and Norm Cairnes the coaching position.

In small boats, results were not so good. The eight oared senior crews of 1954 and 1955 did not seem to be able to change to fours with the same facility and success as in the preceding years, with the result that, in each year, the senior premiership went to Albert Park. In fact in 1954 55 the result was a dead-heat. Mercantile, with most of its top men in the King's Cup crew in Adelaide, boated a senior eight at Mildura in a desperate effort to take the premiership. Well known names of earlier seasons, Bob Aitken, Herbie Shears, Lawrie Moll, Lloyd Williams and others took to the water only to be beaten by Renmark. Of course, they blamed the boat, the station, the starter and anything else they could think of. Others blamed lack of condition accentuated by Mildura hospitality. Anyway, the damage was done and a four oared win at each regatta provided only enough points to draw level with Albert Park. 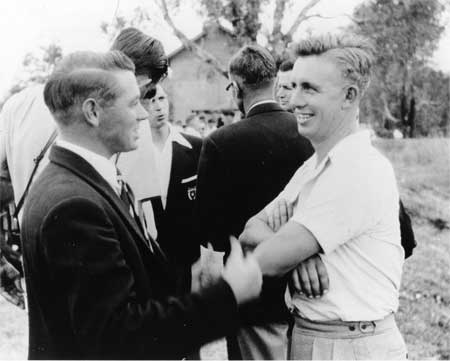 The lighter side of the Mildura-Wentworth double — Easter 1955

Vic Sharpe and Herb Shears in the foreground

In August, 1954, Australia was represented in the British Commonwealth and Empire Games at Vancouver by a single and double scull and a pair, who combined to race in the coxed four as well. The double scull and four won gold medals. Mercantile had no aspirants for that team who all came from New South Wales. However, Roy Thursfield was manager of the rowing section of the team and Ted Kenny was assistant manager of the whole team. Club members gave Roy and Ted a traditional send off at John Williams' Vine Hotel in Collingwood.

The 1954 - 55 season saw two wins in the Grand Challenge Cup by the club because it was in that year that, at the request of the Moomba Committee, the date of the Henley regatta was changed from November to March. The Melbourne Amateur Regatta Association which conducts the Henley regatta had been formed in 1903 and the event was for many years regarded as the most important regatta on the Australian rowing scene. Entries came from clubs all over Australia and Mercantile regularly hosted the crews from Sydney Rowing Club. Henley was also a great social event with house boats, motor boats, canoes and craft of all sorts on the water and along the staging and elegantly dressed spectators on the river bank and particularly in the Stewards' Enclosure. The Association was responsible for the conduct of the whole carnival, including the fencing of the Enclosure, the side shows, bands and the fireworks display as well as the rowing. The organisation of such an event was no small task. Mercantile men had always played their part in this. Ted Kenny was for many years the secretary and he was followed in that position by Roy Thursfield, Norman Cairnes and Deane Morgan.

By the time the change of date occurred the regatta had lost some of its former glory, partly due to the wartime break and partly to the prolonged period of construction of the Swan Street Bridge which necessitated regattas finishing at what is now the five hundred metre mark. For the first year or two after the change the Melbourne Amateur Regatta Association still controlled the whole of the Saturday carnival, but after a disastrous downpour ruined the evening function and the fireworks in 1957 the Association was financially unable to stage the event. Since then the regatta has gradually slipped in importance. For oarsmen it is just another regatta and for the public a minor event on the total Moomba programme.

Note the pylons on the bank.

Entertainment of interstate visitors was a regular feature of Henley regattas. Mick Williams' party at his home on Henley eve was a traditional occasion where the stamina and memories of many old oarsmen were put to the test and all the rowing clubs at Princes Bridge offered hospitality on Henley night.

While the senior men were busy winning eights but not premierships the club's junior and lightweight oarsmen went from success to success giving the club both Junior and Lightweight Premierships in each of the years 1953-54 and 1954-55. For the Juniors it was the third successive year and for the lightweights the fourth. The lightweight result in season 1953-54 was remarkable. Only eight members, Alan Batiste, Paul Leggett, Colin Lewis, Reg McCubbery, John Pell, Ron Richardson, George Robertson and Vic Sharp raced to take the premiership. Bob Aitken was their coach. They won every event in which they started with the exception of the Champion Lightweight pair.

A record of this period of the club's history would not be complete without reference to the death of the then president, Mr. A. L. (Archie) Dobbie, in December, 1954. His prowess as an oarsman, as club captain, as a coach, both of the club and Scotch College, has been amply dealt with in earlier chapters. His death terminated a lifetime of valuable service to the club and to rowing generally, where his guidance in the administrative sphere earned him unqualified admiration and respect. He was a staunch and lifelong friend of many older Mercantilians, but there was no member of the club too new or too young to claim his interest and encouragement. That interest and encouragement contributed in no small part to the Mercantile successes recounted in this chapter.

At a special meeting of the committee it was decided to invite Jim Sprigg to accept the office of president in place of Arch Dobbie, a decision enthusiastically endorsed by the next annual general meeting. The club was fortunate in having available a man who could so readily step into the shoes of his predecessor and give the committee and members that guidance and assistance which they had come to expect from Arch Dobbie and which they still enjoy.

Archie Dobbie's position as president of the Victorian Rowing Association was filled by another Mercantilian, M. S. (Mick) Williams. Mick Williams was a fanatical supporter of rowing and of Mercantile throughout his life. There was scarcely a regatta or rowing function which he did not attend and he was a regular member of the septuagenarians four on Sunday mornings.

Another well known Mercantile man was lost to the club and to rowing in this period. Ted Kenny, a member since 1909, had served the club in almost every office, but he had also been for many years the secretary of both the Victorian Rowing Association and the Australian Amateur Rowing Council. At the time of his death in 1956 he was in charge of the preparations for the rowing events at the Melbourne Olympics, a task which he had tackled with his usual competence and enthusiasm. It was fortunate that Norm Cairnes was available and willing to take over the task which he had started.