If at the close of the 1945-46 season it might fairly be said that the club was returning to normal, then it is probably interesting to record what in the club and its surroundings members might then reasonably consider as normal. The clubhouse was much the same as in pre-war years but showing signs of age and wear, then as now, always needing urgent application of the broom and paint brush. The club had a fleet of boats - large by comparison with present standards - and numbers of enthusiastic, if not particularly well trained, oarsmen ready to compete.

The clubhouse comprised four bays for the housing of boats and oars with the locker room, committee room and balcony covering the central two bays on the first floor level. Across the rear or southern end the first floor was extended over the full width of the four bays to provide a gymnasium extending from ground floor on the east side and a shower room on the west. The walls were of pressed steel, a reminder of the earlier fire, the roof of tiles, and rest of the structure timber. The gradual settling of the stumps into the soft filling on which the club was built gave the building an ageing though not unpleasant appearance but greatly contributed to maintenance problems.

On the question of boats it is worth recording that in pre-war years and up to roughly the end of the period covered by this chapter, crews generally started their training in practice boats and changed to racing craft only for the last four or five weeks of preparation for a regatta series. Only senior crews raced in "Best & Best" boats, shells with a smooth skin like all craft of today. The rest, under the Rules of the V.R.A. were obliged to use clinker-built racing boats. All were made of timber and were fragile in the extreme.

The only really solid parts of such boats were the riggers and a confrontation with the clubhouse doors when lifting the boats out or in was more likely to damage the door than the rigger.

Most of the club's fleet was poppet rigged and allowed for no adjustment to pitch and span. By comparison with today, no long hours were devoted to "tuning" the boat; there was nothing to tune.

The club then boasted a fleet of two "Best & Best" racing eights, three clinker racing eights, and five practice eights, one "Best & Best" racing four, four clinker racing fours and three practice fours together with a couple of racing pairs and a number of tub fours and pairs. It was a formidable fleet to store and maintain. New equipment was practically impossible to buy. There was no boat builder in Victoria at the time and the only source of new boats was from George Towns' or Gus Green's workshops in Sydney, each of which had waiting lists of a year or more. The real influx of oarsmen returning from war service was seen in the season 1946-47. At the opening double of the season (V.R.A. and Henley Regattas in November) the club boated a Senior, Junior and Lightweight and three Maiden eights, a Senior four and two Maiden fours. None of this huge contingent was successful. However, despite this inauspicious start the club finished up winning the Junior Premiership by a narrow margin from Mildura.

The winning run started at the Christmas Regatta with wins in Maiden and Junior fours and eights and finished with the Champion Junior eight on the Lower Yarra at the end of April. Herb Shears stroked the Champion Junior Eight and most of the successful Junior crews for the season. He was supported by Jim Neill, Bob Aitken, Lawrie Moll, John Farmer, Harry Duncan, Jack Fletcher and Barry Johnson. Other members well known to the present generation of Mercantilians who featured in the winning list were John Williams, Bill Wallace, Bill Trickett, Jack Mitchell, Geoff Hyett and Russell Smith. 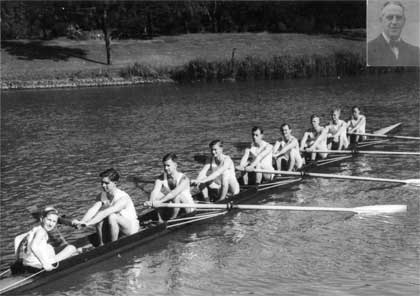 Geoff Hyett and Russell Smith were both sons of members of the club and their sons in turn have represented the club.

There were again few senior entries from Mercantile and a summary of the points recorded in the Senior Premiership at that time is an interesting comparison with present results:

Melbourne University Boat Club in those years was very much confined to College and Inter-Varsity rowing and did not enter seriously into club regatta racing until late in the 1940's.

The following two years saw the club beginning to participate successfully in senior rowing. A Senior Eight comprised of the oarsmen who had been developing in Maiden and Junior ranks over the previous two years was entered in every major regatta. Despite the skill and enthusiasm of the oarsmen and their coach Charles Saleh, they were unable to record a win in Senior Eights throughout these two seasons, being regularly second and third to Corio Bay and Melbourne. Nevertheless, hopes were kept alive and premiership points recorded in Senior Fours and Pairs, so much so that the club was almost able to take the Senior Premiership from Melbourne in 1948-49. 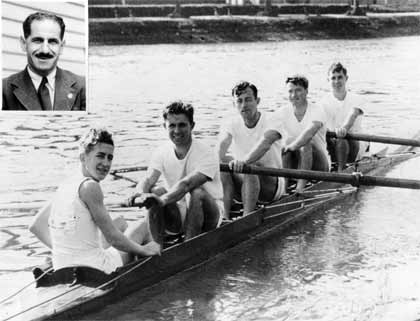 In that season at Henley in November, Bill Wallace, Bob Aitken, Lawrie Moll and Herb Shears, with Barry Jeffery as cox, won the Stewards Challenge Cup after a dead heat with Albert Park, and the Champion Fours, completing a run of nine successive victories in Senior and Open Fours. The club had not held the "Stewards" since 1924, or won the Champion Fours since 1929-30. Bill Wallace and Herb Shears also won the Champion Pairs in December, 1948 giving the club its first win in this event since 1906-07. Their coxswain in that event was Bill Bailey, son of a former Scotch College and Mercantile coxswain Max Bailey and later to make his mark steering Scotch, Mercantile and Victoria. The Bailey name is perpetuated in the trophy presented annually to the champion coxswain.

Part of this success in small boats was undoubtedly due to the purchase of new equipment. The club was able to obtain delivery of a new Towns racing four, months, perhaps years ahead of expected delivery date by agreeing to make the boat available for exclusive use by the four selected to represent Australia in the 1948 Olympics in London before the departure of that crew overseas. The four, christened the R. W. Thursfield (who had donated a new set of Ayling racing oars to the club) was undoubtedly far superior in every way to the pre-war equipment previously used.

The club had only one representative, John Williams, as emergency in the State crew in 1947 and none in 1948 when the Corio Bay senior eight represented the State at Hobart. However, success in small boats brought a change in 1949 when Lawrie Moll, Herb Shears and Bill Wallace were selected.

In December, 1949 the club entered, unsuccessfully, test races for the four and pairs to represent Australia at the Commonwealth (then Empire) Games held at Lake Karapiro in New Zealand. The four oared test race was significant in Australian rowing because it was the first appearance at a national level of a crew selected and prepared on an ergometer devised by Professor Cotton of Sydney University. Professor Cotton propounded the then heretical theory that he could select men on physical attributes alone and that, given good coaching and equipment, they would beat all comers. His initial attempt was unsuccessful. His "guinea pig" crew, as it was called, comfortably defeated the Mercantile entry but ultimately lost to a strong Haberfield crew. Professor Cotton's methods and his ergometer certainly left an indelible mark on Australian rowing.

John Williams, who had been selected as emergency for the King's Cup crew in 1947, had decided in that season to concentrate on sculling. He faced stiff competition over a number of years from Ron Rawlins of Melbourne Rowing Club who was the Victorian representative in the President's Cup each year from 1946 to 1953 save for 1949. Rawlins was just a little too good for Williams but the latter succeeded in taking the 2000 metre sculling title in 1947 and 1949 and the Champion Sculls in 1949. He was the first Mercantilian to win this event since Percy Ivens in 1907. The Champion Sculls were then rowed over 2 1/2 miles from the junction of the Yarra and Maribyrnong to the 10 chain mark below Spencer Street Bridge. The water was generally rough for sculling and the identification of the start and finish lines left much to be desired. The 1949 successes earned John Williams the State selection for the President's Cup race at Murray Bridge in that year when he finished second to Mervyn Wood. 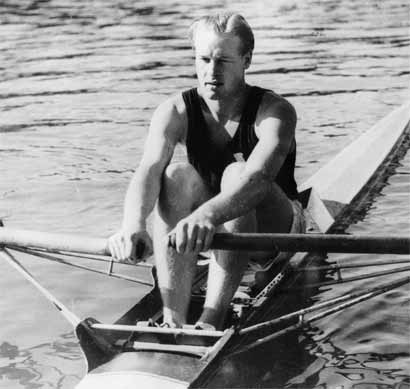 Lightweight oarsmen of the present day may not realise that the maximum weight in those times, as in pre-war days, was 10 stone. It is not surprising that some potential lightweights preferred maiden and junior competition. It may be even more surprising to present day oarsmen that some of the so called "heavies" of the club these days were ever lightweight at all.