A great advance of the 1935-36 season was in the transport of boats to country regattas. Bill Green designed and built a boat frame to enable the racing fleet to be transported by motor truck to the lakeside or riverbank at country regattas. Bill Green's family firm also provided the truck and driver for this innovation, which could carry as many as 11 boats. Before this, boats were floated across the Yarra to the railway yards, where they were loaded on to flat top rail trucks for carriage to country areas. They were then wheeled on jinkers to the regatta venue.

Country regattas had always proved popular with the club's members and in the late 1930's the club organised camping tours by motor coach to the Christmas regattas at Nagambie, Shepparton and then to Rutherglen, where members spent an enjoyable few days on the wooded strip between Lake Moodemere and the Murray. These tours were organised on an elaborate scale by Bill Green, and members who participated enjoyed tours of the local vineyards and stud farms and a row by the entire party up the Murray to Corowa. Catering for the tour was carried out by a character by the name of Ted Doyle, who claimed to be a shearer's cook. Certainly his command of the language supported this contention and this was an education for the younger coxswains of the day.

It was at this time that the clouds of war again loomed on the horizon. Adolph Hitler and the Nazi party had assumed power in Germany in 1930, with Hitler becoming dictator of the country in 1933 and dedicated to avenging the humiliation of Germany's defeat of 1918.

In 1935 the German army had re-occupied the Rhineland without opposition. This area from the West bank of the Rhine to the French border had been a demilitarised zone since the 1914-18 Armistice.

Hitler's attempt for the domination of Europe had started. Mussolini and his Fascist party had assumed control in Italy during the 1920's and in 1936 Germany, Italy and Japan formed the Axis coalition. A prolonged Civil War had broken out in Spain in 1936 with Germany, Italy, Russia and several other countries taking the opportunity of this war to train men and test weapons for the bigger conflict that was to come before the end of the decade. Italy, for reasons of internal prestige, had invaded the small and backward nation of Ethiopia in 1935, but was meeting unexpectedly stiff opposition from the untrained and poorly armed local population. Europe again was re-arming and it was becoming increasingly apparent that the peace of 1918 had in fact been only an Armistice, in the true sense of the word. Within a few short years the world would again be at war, this time on a scale to dwarf the conflict of 1914-18. In Australia, the Commonwealth Militia Forces were formed, with a number of Mercantile members volunteering for the various units over the next few years. Several members also joined the navy and air-force on a part time basis and the extra pay involved was no doubt welcome in those closing days of the Depression.

Against this background Mercantile commenced the 1936-37 season. Jack Bailey was appointed as captain with Norm Cairnes continuing as vice-captain. Due to a transfer overseas. Bill Macrae was compelled to resign as secretary during the season and was replaced by F. (Sam) Newport. 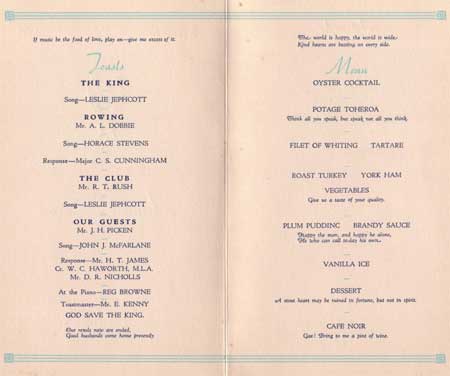 Jack Bailey again started the season in the stroke seat of the Senior Eight, the crew including three oarsmen recently promoted from Junior ranks. At the Melbourne and Henley double the crew was defeated both times. The same fate befell the Senior Four, with Doug Brooke as stroke and having his last competitive race for the club. From a large entry at each of these regattas, the club's only success was a double Junior Eight and the Lightweight Maiden Eights at Henley. In the Champion Fours, the Mercantile crew, which was stroked by Ted Varcoe, was a good second to Albert Park in a field of seven crews. Ted Varcoe had transferred to the club from Essendon Rowing Club and both he and the bowman, Ted Stephenson were small. In todays rowing they would both be considered too small for a Lightweight crew, but in the 1930's they succeeded in winning numerous Senior races.

At the Christmas treble, Mercantile's only successes were a Junior Four at Nagambie and a Lightweight Maiden Four at Shepparton. For the Upper Yarra and Australia Day double, Ted Varcoe became stroke of the Senior Eight, with Jack Bailey moving to the six seat. However, the crew was beaten in their heat both times with the club's only success being a double Lightweight Maiden Eight (again coached by Jack South). An interesting debut in the Senior Eight was that of Gordon (Stonk) Ross, who earlier in the season had competed unsuccessfully in Novice and Maiden Eights. Without having had a previous win for Mercantile, Stonk's first success was a double Senior Eight at Ballarat and Barwon in 1937 and he became a regular member of the Senior Eight in the season that followed. He was emergency for the Victorian King's Cup crew in 1938 and rowed in the unsuccessful 1939 crew.

Although not a big man, Stonk had great strength and ability. He was the club's captain in 1939-40 and following a distinguished war record, during which he was decorated for valour, he became a farmer in the Western District. Until the time of his premature death, he remained a staunch and generous supporter of Mercantile. With his great friend, Lawrie Moll, he provided trophies for the "Stonk/Moose" time trial for many years.

Following a third placing in the Champion Eights behind Richmond and Albert Park, the Senior Eight achieved its first win of the season with a double at Barwon and Ballarat. The club's only other win at these regattas was by the Junior Eight at Ballarat. The season was completed by a double winning Maiden Four at Bairnsdale and Sale, which enabled the club to annexe the Junior Premiership for the first time since 193031. In the Senior pennant Mercantile was third to Albert Park and Richmond.

Jim Clemens, after two years as emergency, was selected for the Victorian King's Cup Crew in the four seat, but this crew could finish only fifth to South Australia.

A feature of the season was the growing strength of the club's Lightweight Division. Points awarded for Lightweight races, still formed part of the Junior Premiership and with five wins for the season, the Lightweights' success was largely instrumental in Mercantile's success in this Premiership.

The Lightweights were a closely knit group and were conscientiously devoted to training, with a general willingness to assist in the furtherance of the interests of Mercantile. Before a training row on a Saturday, they were often seen lunching in the Port Phillip Oyster Bar. After a regatta the dining room at Hosie's was the venue for the celebrations, where toheroa soup, a mixed grill and several pints were all available for the princely sum of seven shillings per head. During 1937 the Lightweights visited Sydney to contest the Lightweight Championship of New South Wales. At that time, New South Wales Lightweight rowing was graded into Maiden, Junior and Senior Divisions. As the Mercantile representatives were in fact maiden oarsmen, they were outclassed in the Senior Championship in comparison to the local crews. However they acquitted themselves well and during their week's stay in Sydney were guests of the Balmain Rowing Club, where the president proved most hospitable and spoke highly of the Mercantile oarsmen's behaviour during their visit. 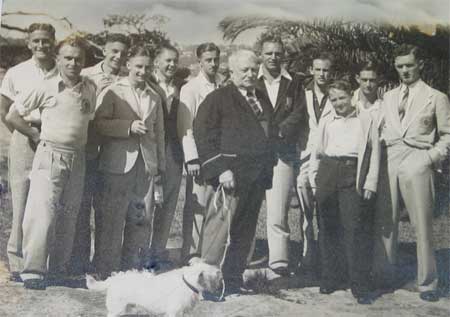 At the 1937 annual meeting, Ted Bradshaw (father of Bill) was elected a life member of the club. Ted Bradshaw had been a member of Mercantile since 1887 and his election as life member marked the completion of his 50 years membership of the club. For over 40 years he was the official timekeeper for the Victorian Rowing Association for all Championship events, including the Australian and University Interstate races when rowed on the Yarra. He was also honorary timekeeper of the Melbourne Amateur Regatta Association (Henley) from its foundation. Mercantile has always jealously guarded the election of honorary life members of the club and at no stage have they exceeded approximately 10. At the time of his election, Ted Bradshaw joined the select band of Alec Clarke, Arch Dobbie, Stan Guinn, Percy Ivens, Wally Joseph, Ted Kenny, Sir Stephen Morell, Bill Potter and Alex Sloan, all of whom had devoted many years of their lives to the service of Mercantile in a rowing or administrative capacity, and in many cases in both spheres.