Edward the Seventh died on May 6, 1910, after a reign of 10 years. Coincidentally, this period had been the most successful in the history of Mercantile during the first 30 years of its existence, and, during that time, it was the main challenger to the great Albert Park Club, which dominated Victorian rowing for most of the decade.

The 10 years from 1900 to 1910 had seen Mercantile win its first two Victoria Rowing Association premierships and it had been successful in 16 State Championships, comprising two Eights, three Fours, three Pairs and eight Sculls. Twenty-three of the club's oarsmen had represented Victoria in the Interstate Eight Oared and Sculling events.

During this period, membership had more than doubled and, with extensive additions to the clubhouse and fleet, Mercantile had become one of the best equipped clubs in the Commonwealth. At the end of the 1909-10 season, the club's finances were reported "as eminently satisfactory" and, for the first time since 1905-06, it finished the year with a credit balance after liquidating the heavy expenditure incurred during the intervening years by way of additions and improvements to the clubhouse and the purchase of new boats.

With considerable optimism, the club started its fourth decade, little realising that with it would come the holocaust of the Great European War and a decline in the club's fortunes which had already commenced and which would take another 10 years to retrieve.

Already, the major European nations had entered into treaties which were to form the basis of the opposing sides in the conflict to commence four years later. In 1910 however, the problems of Europe were still remote as far as Australia was concerned, particularly as more prosperous times had returned to the Commonwealth.

Victoria had been one of the States worst affected by the aftermath of the Depression of the Nineties, and, between 1900 and 1910, some 150,000 of its population had left with many of these travelling to Western Australia to seek their fortunes on the new goldfields of the Kalgoorlie area.

By 1911, Sydney was to assume the place of Melbourne as the largest city in the Commonwealth. Victoria also had ceased to dominate Australian rowing and, apart from its victory in the 1912 Interstate Eight, it did not record a win in the event between 1908 and 1929.

As the 1910-11 season started, Mercantile boasted a further increase in membership and its sound financial position was indicated by the net
assets of the club of £1.057, including the boathouse at valuation of £600, together with boats oars with a total value of £414. The club's fleet consisted of five eights, six fours, three pairs and three sculls, all of which were reported as being in good order.

On the administrative side, Cr. Stephen Morell continued as the club's president, with Arch Dobbie as captain and Walter Joseph as secretary. Ted Kenny had been appointed vice-captain and Stanley Guinn had succeeded Percy Ivens as treasurer. The club however, was faced with the task of rebuilding its senior ranks as, apart from sculling events, Mercantile's last senior victory had been the Eights at the Ballarat Regatta of 1909, with its last championship success being the Eight-oared title of 1908. In addition to Sloan and Ivens, several other members of those victorious crews had either retired or were unavailable.

For Henley of 1910, the club could boat only two crews, with neither being successful. The Senior Eight was stroked by Stanley Guinn, with the evergreen Bill Potter in the six seat. The Maiden Eight, stroked by Jud Harding, also included Jack Reidy, Paul Wade and Harvie Picken, all of whom were to feature prominently in the future of Mercantile. 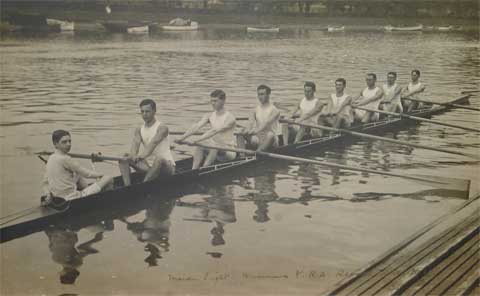 With one change, the Senior Eight which represented the club at Henley, competed four weeks later in the Champion Eights, but could finish only third to Albert Park.

Mercantile's only representative at Seymour was a Maiden Four, stroked by Jud Harding, which recorded the club's first win for the year. With six entries, the club was well represented at the Melbourne Regatta, but its only success was in the Maiden Eight, with Jud Harding again being stroke of the crew.

The club was not represented in the Champion Pair of 1910, but in the Champion Scull held on the same day, Percy Ivens, who was having his second last race, had the misfortune to strike a log and capsize. This latter event was won by Horace Stevens, who although still a member of Mercantile, raced under Essendon's colours.

The club was represented in the Champion Four by a crew stroked by Bill Potter. Unfortunately however, this crew swamped after covering only a quarter of the distance. Again, good entries were made for the Upper Yarra and Albert Park Regattas, but Mercantile's only success was by the Junior Four, which won on both days.

None of the club's crews were victorious at the Ballarat and Barwon double. However, at the former, the Senior Eight rowed a dead-heat with Albert Park, only to be defeated by three feet in the re-row.

Mercantile was not represented at Bairnsdale and the club finished the season without recording a point in the Senior Premiership. In the Junior Premiership, only four wins for the year, left the club in third place behind Civil Service and Banks.

Bill Potter rowed in the six seat of the 1911 Victorian Interstate Eight, with M. C. Brown being selected as emergency.

However, this crew could finish only a distant second to New South Wales, who recorded their second successive win. Horace Stevens represented Victoria in the Interstate Sculls and finished in third place.

The 1911 annual meeting resulted in only one change in the executive with A. F. Moore becoming vice-captain in place of Ted Kenny and, despite a slight drop in membership, hopes for greater success in regatta racing were strong.

Once again, Henley was the opening regatta of the season and Mercantile's entries comprised a Senior Eight, Maiden Eight and Maiden Four. With Bill Potter again in the stroke seat, the Senior Eight was a blend of experience and youth as, while it included four members of the club's last victorious Senior Eight at the Ballarat Regatta of 1909, the remainder of the crew were members of the winning Maiden Eight of the previous season. This crew easily won their heat and were defeated by only two feet by Albert Park in the final. It is interesting to note that this crew rowed with "swivel rowlocks" and it was reported that the "innovation could not be regarded as an improvement". It was to be more than 30 years before Mercantile was to accept the advantage of swivels over the traditional poppets.

After its promising debut at Henley, the Senior Eight was disbanded and the club was unable to boat a crew in this category for the rest of the season. For the first time since 1905, Mercantile was not a competitor for the Champion Eight and the only other Senior crews entered during the season were in the Champion Four and Pair, with both finishing out of a place.

In Junior and Maiden events, results were only slightly better than those achieved at senior level and entries at all regattas were poor. The only successes recorded were by a Junior Pair at the Seymour Regatta and in the Junior Eights at the Melbourne Regatta. This latter crew was stroked by Jud Harding and was based on the winning Maiden Eight at the same regatta 12 months previously.

The club did not score any points in the Senior Premiership, which was again won by Albert Park, and with only 30 points, finished fifth in the Junior Premiership.

In the 1912 Victorian Interstate Eight, Paul Wade who had won his Maiden Eight only 18 months previously, rowed in the bow seat and, while M. C. Brown and Harvie Picken also were selected, they were unable to accept. The Victorian crew was successful in this race from Tasmania and South Australia, with this being the State's first win since 1907 and to be their last until 1930.

It was not only in regatta rowing that the decline of the club was manifest. In the club races, entries for all events were down on previous years and, with only eight crews competing in the Dillon Eights, this field was the poorest for a number of seasons. Social functions were poorly patronised. with attendances being well down for both the annual dinner and ball.