After the relative disappointment of the previous year, season 1907-08 started auspiciously for the club. Percy Ivens once more won the Champion Sculls, this time by a row over and thus retained his title for the seventh consecutive year. At Henley, a week later, he again proved his versatility by stroking the Senior Eight, which won the Grand Challenge Cup by one length from Albert Park. Other Henley successes were in the Elswick Challenge Cup for Junior Fours and the Yarra Challenge Cup for Senior Sculls, with Harold Brasch being the club's representative. Three crews competed at the Seymour Regatta without recording a win, but at the Melbourne Regatta Mercantile was successful in the Senior Sculls (Horace Stevens) and Junior Sculls (Albert Lindblade) and also in the Junior Pairs. For Nagambie, the only entry was a Maiden Eight, which was defeated, but on its first venture to the Colac Regatta on New Year's Day, the club succeeded in winning the Maiden Fours. 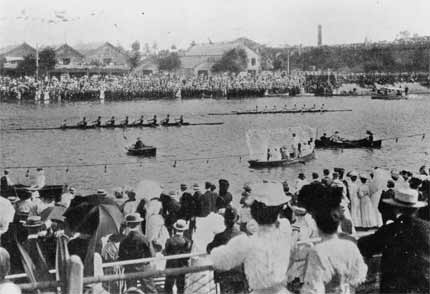 At the Upper Yarra Regatta, five crews competed without a win. However two days later, at Footscray three of these crews were successful in the Senior Pair, Maiden Eight and Maiden Pair. For the Ballarat and Barwon double, the club's Senior Eight was reseated, with Alex Sloan coming into the crew as stroke and Percy Ivens moving back to the two seat.

At Ballarat this crew was defeated by Albert Park by only two feet, but a week later at Barwon, it turned the tables and won by five feet. The only other win at these Regattas was by the Maiden Four.

The Champion Eight was held two weeks after the Barwon Regatta with the only two competitors being Mercantile and its great rival, Albert Park. Once again the Senior Premiership hinged on the result of this event, and after the two great races which had taken place between the clubs at the previous regattas, the event was looked forward to with keen interest. As was anticipated, the race proved to be one of the most exciting in the history of the event, and after two miles, Mercantile led by a few feet. Unfortunately, Albert Park steered inside a beacon which marked the courses, and was disqualified. This result was, of course, unsatisfactory to both crews and engendered some ill-feeling between the two clubs. This culminated in Mercantile challenging Albert Park to a re-row over the same course and while this offer was not accepted, Albert Park subsequently made an unsuccessful appeal to the V.R.A. against the disqualification. By virtue of its win, Mercantile won the Senior Premiership with 56 points, compared with Albert Park's score of 28. Accordingly, Mercantile had not only broken Albert Park's long dominance in senior rowing, but had succeeded in annexing the second premiership in the club's history.

Percy Ivens and Harold Brasch were selected to represent the State in the Interstate Sculls, but Ivens was taken ill a few days before the race, had to withdraw and was unable to defend the title he had won in the two previous years. Brasch made a great attempt to retain the title for Victoria and, while he finished in second place to the Tasmanian sculler, E. Jack, the latter was subsequently disqualified for failure to comply with the amateur definition, with the race being awarded to Brasch. Bill Potter and G. Ferguson were included in the Victorian Eight and Alex Sloan was offered a seat, but was unable to accept. The race was won by New South Wales from Victoria, thereby giving that state its first win since 1893.

At the conclusion of the season, Alex Sloan found it necessary to retire as captain, a position he had occupied for 10 years. During the decade of his captaincy, Sloan's able management and forceful personality as well as his great ability as an oarsman had been the major factor which had contributed to the success of Mercantile over the period.

After 16 seasons of active rowing, Sloan also retired as a competitive oarsman. During the period of his racing career, Victoria possessed many fine oarsmen. Alex Sloan undoubtedly stood high among them and was one of the finest strokes Australia had known. He won 58 races, comprising the Championship Four of Australasia, 7 Interstate Eights (he declined selection on 6 other occasions), eight Championship and Senior Eights, 23 Fours, 16 Pairs and three Sculling races. He won double Senior Four and Pair-oared races at the same regatta eight times. Despite such an active racing career, he also found time to coach Junior and Maiden crews with considerable success and was coach of Scotch College for several years.

Following his retirement, Alex Sloan was promptly made a Vice-President and life member of the club and some years later was persuaded to resume the coaching of both club and Scotch College crews. He did this with exceptional success and for more than 10 years was coach of most of the club's Senior crews. He also coached several Victorian Kings Cup crews, including the winning crew in South Australia in 1930.

The scene of Henley on the Yarra at this time

Arch Dobbie succeeded Sloan as captain of the club at the start of the 1908-09 season, with Stan Guinn as his vice-captain. J. A. Wood was appointed secretary and Percy Ivens continued as treasurer. Membership continued to increase and finances were reported as being satisfactory despite a number of outstanding subscriptions. The club was represented in all championship events, but without success. However, regatta results were more satisfactory and included four wins at Henley, comprising the Grand Challenge Cup for Senior Eights (stroked by Percy Ivens), the Yarra Challenge Sculls (Harold Brasch), Junior Eights and Junior Fours. Other major wins for the year were the Senior Sculls at Melbourne Regatta (Horace Stevens), the Maiden Eights at Colac and the Senior Eights at Ballarat. Ted Kenny, who was subsequently to become an administrator of great ability for both the club and Victorian rowing, won the Junior and Maiden Sculls double at the Melbourne Regatta. In the premiership, Mercantile had to be content with third place to Albert Park in the senior pennant and was also third to South Melbourne for the junior premiership.

Percy Ivens and subsequently Harold Brasch, were offered selection as Victoria's interstate sculler, but neither was able to accept. J. J. Fogarty and G. Ferguson represented the club in the Victorian Eight, which finished second to Tasmania in Brisbane.

In the 1909-10 season, Walter Joseph took over as secretary of the club, a position which he was to hold for the next 10 years, and J. J. Fogarty became vice-captain to Arch Dobbie. Percy Ivens started his eighth and final year as treasurer. In both Championship and Regatta events the club was well represented throughout the year, but successes were few. After being unable to compete the previous season, Percy Ivens won the Champion Sculls for the eighth time and also was successful in the Senior Sculls at the Henley and Melbourne Regattas. While the club representatives made a valiant attempt to win the Champion Eights, they could finish only a close second to Albert Park, which again won the Senior Premiership. In Junior and Maiden ranks the only success for the season was by W. E. Harvey in the Junior Sculls at the Upper Yarra Regatta.

G. Logan was the club's only representative in the 1910 Victorian Eight, which finished second to New South Wales, Stan Guinn was emergency, and Ted Kenny manager. Percy Ivens competed as the Victorian Sculler for the last time, but was beaten by the Tasmanian representative after a close race.

At the end of the season, Percy Ivens retired as club treasurer, and while he competed unsuccessfully in the Champion Sculls the following year, he also had recorded his last win as an oarsman and sculler. A small man, Ivens' achievements and versatility were remarkable and extended over a period of 14 years. He was not only the outstanding Victorian Sculler of the period, but rowed with equal ability on both stroke and bow side. In a total of 41 wins, his successes comprised nine Eights, seven Fours, eight Pairs and seventeen Sculls. In crews, these wins included two Interstate Eights, two Champion Eights, three Champion Fours and a Champion Pair. Apart from his consecutive victories in the Champion Sculls, he also won the Interstate Sculls twice. Shortly after his retirement from active competition, Ivens went to live in Taree in N.S.W., where he resided until his death in 1947. He was a life member of the club.

It was largely through the rowing ability and administrative efforts of Alex Sloan and Percy Ivens, that Mercantile had achieved its successes of the previous decade, and with their departure from the scene, an era had ended.