Reporting on the accounts for the year ended September 5, 1905, the comment was made that the financial position "was very flattering, and one need look no further afield for confirmation of the club's progress and prosperity". After payment for two new Practice Pairs and a Racing Four (totalling £71), the club finished the year with a healthy credit balance of £83. The club house was valued in the balance sheet at £360, while boats and oars represented a total of £338. The capital, or surplus, of the club assets at that date stood at £803. 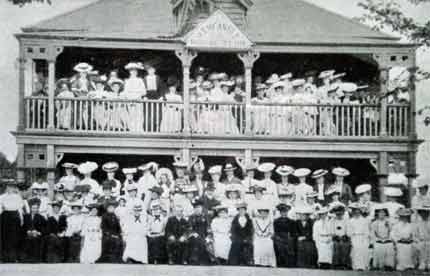 Activities within the club also continued to prosper, with eight club races being held during the season. For the first time, these included the Dillon Eights an event confined to club members, which attracted an entry of nine crews. In addition, the Morell Combination Eights, open to members of all clubs, resulted in a field of 17 crews. This event, for handsome trophies donated by Cr. Stephen Morell, had been established some years previously and, thanks to the generosity of his family, it still continues to be a popular annual fixture.

The social life of club members and their ladies was not neglected, with major functions including the President's Day, during which club Fours were conducted with the club house being decorated and a string band being in attendance.

The annual ball, which boasted an attendance of almost 300 made a profit of more than £14 and in addition, on Henley Day, the committee made very complete arrangements at the boathouse for the comfort and entertainment of members and lady friends. The club room was tastefully decorated and afternoon tea catered for in a first-class manner.

Although records do not reveal the precise date, it was at approximately this stage of the club's history that a most regrettable incident occurred. It had its start at one of the early Henley Days when two foundation members of the club who had returned to Melbourne after an absence of many years sought admission to the clubhouse. These were two of those who had contributed debentures for the building of the club in 1885 and who in consequence claimed "life membership". The captain, Alex Sloan, declined to recognise the existence of this "membership" and Mr. V. F. Mason himself a life member unsuccessfully intervened on behalf of the visitors.

In correspondence that followed with the club, Mr. Mason demanded redemption of debentures acquired by him when the clubhouse was built and which he was prepared to forego, until he found the current management ignoring the rights of his contemporaries. After receiving no satisfaction from the committee in respect of the claim for repayment, Mr. Mason took the matter to the County Court. Although his case was dismissed on technical grounds, with costs being awarded in favour of the club, the affair received considerable press publicity of the type rowing could well do without.

As a happy sequel to these events, Mr. Mason returned to Mercantile in 1934, after an absence of 30 years, to become a most generous supporter of the club. Until his death in 1943, he regularly donated trophies for club races and one of the club's fleet was named in his honour.

Unfortunately, in February, 1905, the club was saddened by the death, after a brief illness of President, Mr. Blackwood. Although he had occupied the position for less than two years, Mr. Blackwood had long been a staunch and liberal supporter of the club and rowing in general. It was largely thanks to his initial efforts that the Australian Henley Regatta had been so successfully established.

Cr. Stephen Morell was elected club president at the start of the 1905/06 season and was to hold that position with great distinction until his retirement 28 years later. This term was the longest to be recorded for any office bearer of the club to that date. During this time he was Lord Mayor of Melbourne from 1926 to 1928, receiving a knighthood for his services to the community. Sir Stephen was also president of the Victorian Rowing Association at the time of his death in 1944. The club was fortunate indeed to have gained the services of this dedicated man to guide its destiny over such a lengthy period. 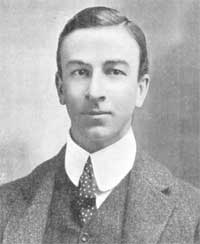 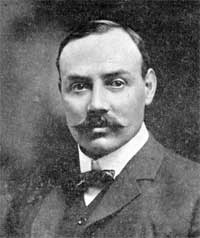 Albert Hoof was drowned on 1st December 1906 through the swamping of a four oared boat near the junction of the Yarra and Maribyrnong Rivers. Councillor S J Morell was appointed President in 1905 after the death of A R Blackwood.

With an executive comprising of Alex Sloan as Captain, Albert Hoof as Vice-Captain, Arch Dobbie as Secretary and Percy Ivens as Treasurer, together with a healthy membership and strong financial position, the club started the 1905-06 season with justifiable optimism. Once again Percy Ivens opened the year with his fifth successive victory in the Champion Sculls and this was followed by a double at Henley, with Ivens winning the Senior Sculls and the Maiden Eight also being successful. This latter crew became the fourth Maiden Eight from the club to win at consecutive Regattas. At the Seymour Regatta, the club had a "day out", with all three entries recording wins. These successes were followed by a win to the club in the Champion Pair early in December and, at the Melbourne Regatta, held a fortnight later, the club achieved five wins from nine entries. At Nagambie, Mercantile's only representative was a four, which won both the Maiden and the Junior events. At the Upper Yarra Regatta, two more successes were recorded in the Senior Pair and Maiden Sculls and, two days later at the Footscray Regatta, Lisle Jones won both the Maiden and Junior Sculls.

For the Ballarat and Barwon double, the club was again in a position to boat a Senior Eight, which at Barwon won its heat and rowed Albert Park to half a length in the final. With wins in the Senior and Junior Pair at Ballarat, the club's success in the V.R.A. Premiership depended on the result of the Champion Eight held at the end of March. With Alex Sloan back in the stroke seat and Percy Ivens bow of the Mercantile crew, this three mile race was a magnificent one and after a neck and neck struggle throughout the whole distance, Albert Park was victorious by a bare canvas from Mercantile.

The regatta season concluded with the recently revived Bairnsdale Regatta at Easter, where the club succeeded in the Senior Fours. For the season Mercantile had won at 21 races, but due to the disproportionate method of allocating points for various categories of races, the premiership went to Albert Park for the fourth time in five seasons, despite the fact that it had recorded only 13 wins. The anomoly that existed under the then current allocation of premiership points was due to the fact that, while points were awarded to each member of a winning crew, they were manifestly disproportionate, with 18 points per man for championship races, 6 for Senior, 3 for Junior and 1 for Maiden. Consequently the canvas victory by Albert Park in the Champion Eight meant a difference of 288 points between that club and Mercantile and more than accounted for Albert Park's winning total of 406 points, compared with Mercantile's 170. This situation was to be partially remedied during the following season when the premiership was divided into Senior and Junior Divisions. However, the disproportion of points between championship and senior events, and Junior and Maiden races was to remain for a number of years. 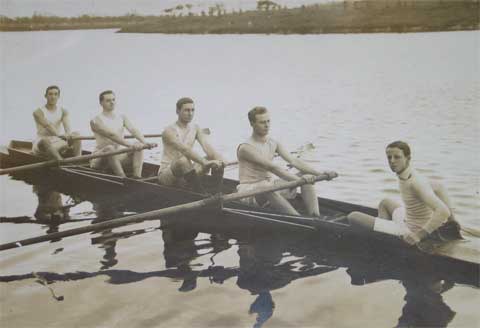 Bow: A Warson, 2: H W Lloyd, 3: W H Waters, Str: P L Armstrong, Cox: R A Cooper. Later Dr R A Cooper established a fund which provided a trophy for the Club member of the year and which donates funds to members in Australian crews.

As usual Percy Ivens was nominated as the Victorian sculler for the 1906 Interstate Championship, and on this occasion was successful from the Tasmanian and Western Australian representatives. M. C. Brown and J. J. Fogarty were selected in the Victorian Eight, with this crew finishing second to Tasmania and thereby breaking the run of 12 successive Victorian victories.

A feature of regatta races during the 1905-06 season, was the remarkable success of Lisle Jones, a former senior coxswain of the club who had developed into a first class stroke and competent sculler. Starting the season by stroking a winning Maiden Eight and ending it with a success in the stroke seat of the Senior Four at Bairnsdale, Jones won nine races during the year.

Season 1906-07 saw a further increase in membership and to accommodate the increasing fleet, it was necessary to double the ground floor area by building an annex on each side of the existing boathouse, giving four bays for boat storage. The club fleet comprised five eights, five fours, five pairs and four sculls and it was reported all were in good condition with a plentiful supply of oars. According to the balance sheet for the season, this equipment had a total value of £600 with the boathouse (including the additions which had cost £267) being valued at a similar amount.

The season was to be marred by the tragic death of the club's vice-captain Albert Hoof, who was drowned on December 1, 1906, when a four in which he was rowing was swamped at the junction of the Yarra and Saltwater Rivers. Hoof had been a successful Junior oarsmen and was a respected and enthusiastic clubman. His death was deeply regretted by his club mates.

Following its successes of the previous season, the club was hopeful of winning at least one of the 1906-07 Premierships but this was not to be. After leading in the senior premiership up to the Champion Eights, Mercantile could only finish third in that event to Albert Park which took the premiership, despite the fact that nine Senior and Championship wins were recorded by Mercantile, compared with only six to Albert Park. In the junior premiership the club could record only three wins, comprising of a Maiden Four, Maiden Pair and Maiden Scull and therefore finished well down the list.

The successful Maiden sculler at the Melbourne Regatta was Albert Lindblade who had achieved success as bow of the Scotch College four at the Public Schools race in 1899 and who had subsequently won a Maiden Eight, Maiden Four and Junior Four with Mercantile. Albert was later to become a vice-president of the club and maintained a keen interest in its affairs throughout his life. He was an enthusiastic worker in many areas of the club's activities and carried out a considerable amount of research relating to the early days of the club. It is largely thanks to his efforts and the earlier information compiled by Alex Sloan that much of the early records available for this history was preserved.

Once again, Ivens represented Victoria in the Interstate Sculls and recorded his second win in this event. Lisle Jones and G. Ferguson were selected for the Victorian Eight, which avenged its loss of the previous years by defeating Tasmania in Adelaide.