From the point of view of senior rowing, the 1902-3 season was even more dismal, Mercantile not being represented in the Champion Eight, Four or Pair. However, Percy Ivens again won the Champion Sculls from his club-mate Harold Brasch, with Ivens and Sloan winning the Senior Pairs at the Melbourne Regatta. In addition to successes in the Senior Sculls at the Melbourne and Upper Yarra Regattas, Brasch journeyed to Tasmania and comfortably won the Champion Sculls of that State from T. H. Bourke, who was to win the interstate title later that season and in each of the following two years. Alex Sloan, who had become an automatic selection for the Interstate Eight, was again offered a seat, but was forced to decline for personal reasons. 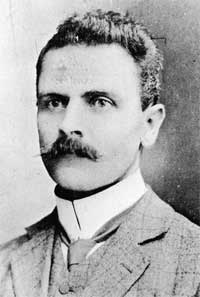 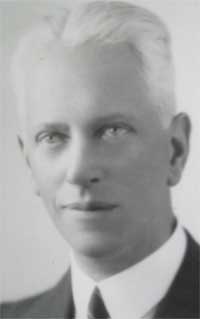 In junior ranks, the club had several successes, the most notable being the Maiden Eight double at the Upper Yarra and Footscray Regattas. This crew recorded the first win of a slim youth by the name of Arch Dobbie, who was to play a dominant part in the affairs of the club and Victorian rowing for the next fifty years. The debt of Mercantile and the Victorian Rowing Association to Arch Dobbie in the capacity of an administrator and oarsman is more fully covered later in this history, but suffice to say at this point, that in a little over 12 months after his first win, he represented Victoria in the Interstate Eight. In addition to a successful rowing career, he held at various times every executive office in the club, with the exception of treasurer and filled each of these with distinction. At the time of his death, he was both president of Mercantile and the V.R.A.

The 1903-04 season saw a change in the presidency of the club, with Arthur Blackwood succeeding J. B. Whitty. The latter had held office for a period of 20 years and it was with great regret that he was compelled to retire due to indifferent health. J. B. Whitty was a generous supporter of Mercantile in every respect and the loss of his services was severely felt.

Although membership had increased to 80, the 1903-04 rowing season was again one of disappointment for the club. While Ivens and Brasch continued to dominate Victorian sculling, with the former winning the State Championship and the latter the Senior Sculls at the Melbourne Regatta, only five other successes were recorded, with three of these being in Maiden and Junior Sculling events. The other two wins were by the formidable Percy Ivens and Alex Sloan, who won the Senior Pairs at the Footscray Regatta, but were deafeated in the Champion Pairs, and by the Maiden Four, also at Footscray. This latter crew included Arch Dobbie. Both were steered by R. A. (Jack) Cooper, whose name then appeared in club records for the first time.

"Doc" Cooper, as he was to become affectionately known in later years, had thereby started an association with Mercantile which was to extend over a period of almost 70 years. During this time the club was to benefit from his outstanding services as a coxswain, oarsman and coach. Following his retirement from the latter capacity, his shrewd and often caustic judgement of crews and oarsmen was greatly respected. Another debut of interest during the same season was that of Horace Stevens, who won both the Maiden and Junior Sculls at the Ballarat Regatta. Several seasons later, as a representative of Essendon, Stevens was to win the State Champion Sculls on two successive occasions. He was also to achieve Australia-wide fame as the greatest oratorio singer of his time. Despite this success he always maintained his affiliation with Mercantile and over the years, many a club smoke night was made more enjoyable by his rendition of musical items.

March, 1904, was marked by the inaugural Australian Henley Regatta held on the Upper Yarra and conducted by the newly formed Melbourne Amateur Regatta Association. Several Mercantile members played a prominent part in the establishment of this prestigious regatta, which as an event on the Victorian sporting and social calendar, was shortly to become second only to the Melbourne Cup. 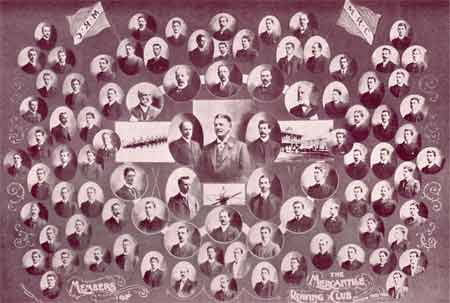 After a lapse of several seasons, the club was successful in boating a senior eight for this first Henley and, whilst it suffered defeat in the Grand Challenge Cup and also in the two lead-up events at Ballarat and Barwon Regattas, the crew was beaten only by misfortune in the Champion Eights held a week after Henley. After covering two miles of the Championship Course, Mercantile, who had established a comfortable lead, struck a submerged stake and their boat gradually became water-logged. The crew made a valiant effort to maintain its position, but was beaten eventually by Ballarat with Albert Park in third place.

Arch Dobbie was selected for the 1904 Victorian Interstate Eight, which was again victorious, and whilst seats were also offered to Alex Sloan, Jack Southern and Dr. E. K. Moss, they were unable to accept. Percy Ivens was Victoria's representative in the Interstate Sculling Race, but was defeated by T. H. Bourke of Tasmania.

To enable the date to be changed from March to October, a second Australian Henley was held in 1904, thus making it the first regatta of the new season. The club was unsuccessfully represented by a Maiden Eight and Maiden Four, but Harold Brasch was successful in the Senior Sculls. However, it was the Stewards Challenge Cup for Senior Fours which provided the sensation of the Regatta. Mercantile, stroked by Alex Sloan, won their heat comfortably and were opposed by Nagambie in the final. Despite interference from launches early in the race, they made up lost ground and had established a lead nearing the finish, when a foul occurred with the umpire disqualifying Mercantile. An appeal for a re-row was lodged with the Regatta Committee on the grounds of interference and was disallowed. The club caused a special meeting of the V.R.A. to be held to deal with the matter, and the body resolved that the disqualification was not in accordance with the rules of the Association and should be revoked. The Henley Committee refused to comply with this request and a second special meeting of the V.R.A. was called. This meeting, disregarding its previous decision, decided to take no further action in the matter and, in view of the club, "thus practically forfeited the Association's position of being in control of rowing in Victoria, by allowing their first resolution to be ignored". The matter was not allowed to end there, and on December 14, 1904, a special general meeting of the club was convened to consider the action of the V.R.A. At this meeting the following motion was passed with only two dissentients: -
"That in the opinion of this meeting the V.R.A. has not the confidence of this club, and to emphasise its protest, its delegates be withdrawn from that body."

Fortunately, a more reasonable attitude appears to have subsequently prevailed and at the 1905 annual meeting, Mercantile re-appointed two delegates to the V.R.A. for the following season.

While the club did not boat crews in either the Champion Eight or Pair for the 1904-5 season and was unsuccessful in the Champion Fours, Percy Ivens won the Champion Sculls for the fourth successive year. Ivens also won the Senior Sculls at Ballarat and again was selected as Victoria's Interstate Sculler, but could finish only third to T. H. Bourke of Tasmania. Other wins were confined to Maiden and Junior events, but the fact that two different Maiden Eights were successful at the Upper Yarra and Ballarat Regattas augured well for the future of the club. As usual Sloan was selected for the Victorian Eight, which subsequently won in Sydney, but again was forced to decline for personal reasons.

It is interesting to review the club's finances at this point of its history. Following an intensive recruiting campaign, 43 new members had been elected during the 1904-5 season and at the end of that year membership was more than 100 - larger than it had been at any previous point in the club's existence. Subscription for full members was £2.4.6 per annum and was to remain unchanged for the next 15 years. By comparison, the "Harvester Award" or basic wage, which was to be introduced 12 months later, was set at £2.2.0 per week, and the reaction of current members would be interesting, if they were asked to pay a subscription equal to the present minimum weekly wage.