With the start of the twentieth century, came times of change to Australia, accompanied by renewed optimism for the future of the country. The six colonies had voted in favour of Federation and the Commonwealth of Australia was proclaimed on January 1, 1901. The infant nation remained part of the British Empire and therefore a senior member of the greatest union the world had ever known. The celebrations which followed were however abruptly ended by the death of Queen Victoria only three weeks later. The revered Victoria had presided over this great Empire for more than sixty years, and only the elderly could remember any other monarch. Queen Victoria was succeeded by her son, Edward the Seventh, which would surely result in some relaxation of the outwardly stringent morale codes of the Victorian era.

Despite the relief of Mafeking in May, 1900 and other British victories, the South African War, which had started in 1899, continued with the Boers refusing to accept defeat by the numerically superior Empire forces. The Australian colonies had sent forces which included several Mercantile members to this conflict and, whilst a number of casualties had resulted, the problems in South Africa, together with the beginnings of the power struggle between the great nations of Europe, represented only a distant cloud on the horizon so far as the citizens of the new Commonwealth were concerned. Certainly, there was no indication of the conflagration that was to erupt 14 years later.

Following the collapse of the Land Boom in the Nineties, with the consequent failure of numerous banks and resultant widespread unemployment, stability appeared to be returning to the State of Victoria. Positions were still not easy to obtain, but Melbourne remained the largest city in Australia and, even only temporarily, had assumed its rightful place as the capital of the Commonwealth, with the first Federal Parliament being opened by the Duke of York in the Exhibition Buildings in May, 1901.

Progress had come also to Melbourne. Electric light had replaced gas in its streets and was extending into the homes of the more affluent. The city had a comprehensive network of railways extending throughout its expanding suburbs, cable trams trundled through its streets and were gradually replacing the horse drawn trams in outer areas. A sprinkling of the new fangled motor cars was beginning to appear to terrify horse drawn vehicles.

Albert Park and Mercantile entering the river. From the "Leader", 16 March 1901.

On the rowing scene, Victoria also maintained its dominance, having won 19 of the 24 Inter-colonial Eight-oared Championships conducted up to 1900, with these including the previous seven in succession. The Victorian Rowing Association presided over the fortunes of rowing in the State and continued to conduct the annual V.R.A. Melbourne Regatta. Whilst several of the foundation clubs of 1876 had disappeared into history, the number of its members had been augmented throughout the years as a result of the formation of new clubs, with Mercantile being included in 1881.

By 1900, the major metropolitan clubs were Albert Park, Banks, Civil Service, Essendon, Footscray, Hawthorn, Mercantile, South Melbourne, University and Yarra Yarra. In the provincial cities rowing also flourished, with the three powerful clubs of Ballarat, Ballarat City and Wendouree representing the former gold mining town; whilst Barwon and Corio Bay from Geelong were forces to be reckoned with. Bendigo boasted two clubs in Sandhurst and Eaglehawk, with crews from the country clubs of Bairnsdale, Cobram, Dimboola, Nagambie, Sale and Seymour making regular appearances at Regattas.

The V.R.A. had established an Association premiership in the 1898-99 season which until it was divided into the Senior and Junior Divisions in 1906-7, remained one premiership with a varying number of points being awarded for wins in Championship Senior, Junior and Maiden events. The first of these premierships had been won by Ballarat, with Albert Park being successful in 1899/1900.

By the standards of the present Regatta calendar, competitive rowing at the turn of the century was limited, with championships only being conducted for Senior Eights, Fours, Pairs and Sculls. Metropolitan regattas were confined to two conducted on the Upper Yarra by the V.R.A. and Upper Yarra Regatta Association, plus the Footscray Regatta on the Saltwater (Maribyrnong) River. Country regattas regularly attended by the club were Ballarat, Barwon, Seymour and Nagambie. 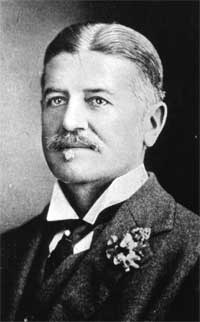 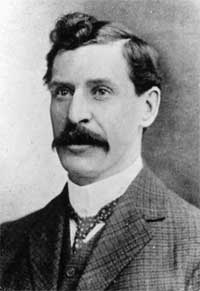 A B Sloan - Captain

As the first season of the new century started, Mercantile was well poised for major success, Mr. J. B. Whitty had been president of the club since 1882, Alex Sloan had assumed captaincy of the club following the retirement of Frank Gibbs, who had served six terms in that office and A. R. Moses and J. R. Strong continued as secretary and treasurer respectively. Stephen Morell, who with his great friend Alex Sloan, had joined Mercantile from the ailing Electric Telegraph Club in 1894 and who had competed successfully in senior ranks until his retirement in 1897, was appointed a vice-president of the club. A short time later, he was to be elected as a councillor of the City of Melbourne.

Membership had increased from the perilous low of 32 during the depression years of the nineties, to a more satisfactory figure of 56 and, with a further increase of 70 during the following season, it was necessary to extend the dressing rooms over the full length of the boathouse.

Club finances were in a more satisfactory condition and the fleet had been improved in both quantity and quality. Following the rebuilding of senior ranks during the latter part of the previous decade, the club was destined to make its mark on Victorian rowing during the 1900-01 season. Syd Edwards, who had been senior coach of the club for more than 10 years, together with the redoubtable Alex Sloan as stroke, now had sufficient support to more than emulate the successes of the mid nineties. During the year, the club was successful in winning each of the Champion Eight, Four and Pair, with Alex Sloan and Percy Ivens being members of all of these crews. The Senior Eight also won at both the Melbourne and Ballarat Regattas, with the Senior Pair being successful at Upper Yarra. Other wins recorded were a Maiden Eight at Ballarat and a Maiden Four at Barwon. The club had won its first premiership and to culminate the most successful year in the history of the club, Alex Sloan, Jack Southern, Bill Potter and Percy Ivens, with Lisle Jones as coxswain, were selected for the first Victorian Interstate Eight following Federation. This crew was victorious and gave the State its eighth successive win.

Of particular interest during this period was the rapid rise to success of Jack Southern. A big man in any era, Southern who was 6ft. 5in. and weighed l5st. 7 lb. was perhaps the largest man seen in Victorian rowing to that stage. At the start of the 1900-1 season, Southern had never competed in a boat race, but was selected in the three seat of the Senior Four, following the transfer of J. A. Strong to Western Australia. This selection was a big challenge to Southern and coach, Syd Edwards, but to the credit of both, the crew won the Champion Four and the Senior Four at Upper Yarra a fortnight later. Southern also rowed seven in the club's Senior Eight, which was successful in the championship and at the Melbourne and Ballarat Regattas. He then concluded an amazing first season of competition rowing by winning the Interstate Eight in the seven seat of the Victorian crew. Unfortunately, Southern was not available for selection during the following two seasons and, whilst he subsequently rowed in the club's Senior Eight and was offered a seat in the 1904 Victorian Eight (which he was unable to accept) he was not again a member of a winning club crew.

After the triumph of 1900-01, the following season was something of an anti-climax, as whilst Mercantile were again successful in the Champion Four (with Dr. E. K. Moss replacing Southern in the three seat), and the same crew won the club's ninth successive Senior Four on the Upper Yarra course at the Melbourne Regatta, other successes were not numerous. Percy Ivens demonstrated his versatility, by his success in the Champion Sculls, but the only other wins recorded were in the Maiden Sculls at Ballarat and Barwon Regattas and by a Junior Pair at Nagambie. Due to the illness of Alex Sloan, the club was not represented in the Champion Eight, which gave Albert Park a row-over, but Sloan, Moss and lvens were selected for the Victorian Eight, which was again successful in Adelaide.