Season 1895-6 saw the club's membership drop to only 40, undoubtedly due to the financial depression and the relatively high rate of the membership subscription.

But despite lack of numbers the magnificent Senior Four had continued success, winning the only two senior four races that season, which included the Victorian Championship, this being the first championship won by the club. Then Herb Davis dropped out. He had been transferred to Singapore and was a great loss to the club. Sloan moved up to stroke and the great Charles Donald, then of Wendouree, came into the two seat in the Victorian Four which won the Champion Four of Australasia. It defeated New Zealand and New South Wales on the Parramatta River over 2 1/2 miles in the fast time of 12 minutes 32 1/2 seconds. 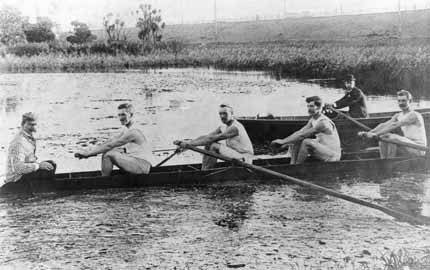 A Senior Eight (being the Senior Four with the addition of Frank Gibbs, Steve Morell, A. Hood and K. Fourdinier) was defeated at Ballarat by Yarra Yarra but, with Sloan moving to stroke and Ward replacing Davis, Mercantile became Champion Eight of Victoria for the first time. It defeated Yarra Yarra, Banks and Tamar (Tasmania) over three miles in 17 minutes 17 seconds. Sloan, Lindgren, Gibbs and Dawson rowed in the winning Inter-colonial Eight at Sydney. Victor Jones steered all these crews.

This was Ernie Dawson's last season. Although only 10 stone, he was a fine oarsmen and specialist bow man in the days when the narrow and unstable design of rowing boats made the bow seat a job for an oarsmen with supreme balance, anticipation and dexterity.

Dawson had been the centre of a remarkable dispute at the Inter-colonial race in Brisbane in the previous year. The New South Wales Rowing Association discovered some days before the race that Dawson had cycled for cash prizes. In doubt as to where this placed the N.S.W. rowers if they competed against him, the Association instructed the N.S.W. crew not to start unless Dawson was withdrawn. Dawson started, and in a "gross breach of discipline", the N.S.W. crew mutinied and decided to row. Victoria won the race, beating N.S.W. by a length.

Two problems faced the N.S.W. Rowing Association: how to discipline the crew and, in any event, were they still amateurs? The Association also protested to the Victorian Rowing Association, demanding a "no-race" decision. The Queensland Rowing Association took the view that each Association had to interpret its own rules, and accordingly, asked the V.R.A. if its rules allowed a cash cyclist to row as an amateur.

Victoria quickly announced that they did. The N.S.W. Rowing Association decided to consult the Amateur Rowing Association of England for its view on the matter and proceeded to pass a vote of severe censure on its own crew. It also decided that all members had forfeited their amateur status through having competed against a professional and that a new rule would be needed to overcome the position. A later meeting reinstated all the oarsmen concerned to amateur status.

Queensland suggested a further conference on the question of managing inter-colonial racing but there seemed to be insufficient time before the next race was due. And could N.S.W. race against a further crew selected by Victoria under its own rules? In due course, advice was received from the English A.R.A. that it had considered the matter and agreed that the action of N.S.W. was justified and that the Victorian oarsman was not an amateur under Victoria's rules.

The years 1896-7 saw a further drop in membership to only 32. A successful season opened with Lindren winning a Junior Scull and thereafter the club won three Senior Fours, including the Championship, two Senior Pairs, a Junior Four, Maiden Eight and two Maiden Fours. Long term Mercantilian Bill Potter gained the winning ranks during the season as a maiden and junior oarsman and also rowed in the Senior Eight.

The Senior Eight was defeated at Barwon by Ballarat in a re-row. In the first race Ballarat lost an oar when Mercantile was leading, and in "sporting spirit" Mercantile stopped and went back for a re-row. Mercantile won the Champion Eight from Banks and Yarra Yarra. 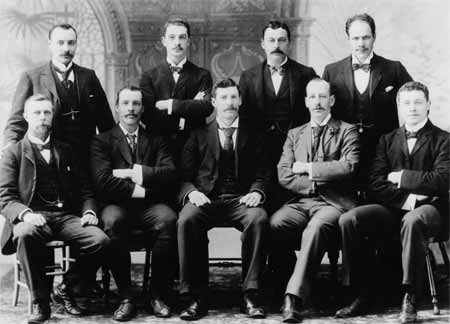 Syd Edwards had coached the seniors and Alex Sloan the maiden and juniors. Lindgren unsuccessfully represented Victoria in the Inter-colonial Sculls, but Sloan (stroke), Strong and Connor, with Victor Jones, were members of the winning Inter-colonial Eight. Strong was son of the Lord Mayor of Melbourne and one wonders whether their mutual interest in Mercantile played any part in Stephen Morell's subsequent civic career.

At the end of this season Lindgren, Gibbs and Morell retired from competitive rowing - a disappointment to Morell that, perhaps due to his small stature, he had failed to win the honour of being selected as an inter-colonial representative. But although Morell missed selection, Strong and Connor gained the distinction of being Maiden, Junior, and Intercolonial Champions in the one season.

The coach/stroke combination of Edwards and Sloan had continued success. Altogether the club won eight races in various divisions during the 1897-9 season, including the senior eight at Barwon. The Senior Four (Sloan, Strong, Potter and Connor) was defeated. However, towards the end of the season things were not going too well. The Ballarat Regatta was a disaster when Strong's oar broke and the senior pair capsized. Then the Senior Eight was beaten in a row off after a dead heat with Wendouree and lost the Champion Eight to Banks. Sloan however, retained the stroke seat of the successful Inter-colonial Eight with Potter and Strong, each having changed sides at the outset of the season, rowing six and seven respectively behind him. Sloan, by that time, had a magnificent record of thirty-two starts in Inter-colonial and State Championships and senior races for twenty-five wins. He had been a member of every winning senior four since 1894 and the situation had now been reached when quite often the senior four was struck out of the regatta programmes as there was no crew prepared to enter against Mercantile.

During the season, at the instigation of Morell, aided and abetted by Sloan who was then coaching Scotch College, the Headmaster agreed to a number of his senior students being admitted to Mercantile. Scotch had until then rowed from Greenlands. This resulted in the long lasting and mutually satisfactory relationship between the club and the school. The arrangement was almost immediately successful when Scotch, with the famous Mercantilian Albert Lindblade in its four, won the Head of the River in the following season.

Over the years many successful Mercantile oarsmen were to come from this association and, in course of time, the Scotch-Mercantile Regatta which is now the largest in Australia developed. The current Regatta secretary is Bill Bradshaw, one of the leading administrators with the club and the VRA. His father, Ted Bradshaw, was very active in rowing circles and before the turn of the century was joint secretary of the Upper Yarra Regatta Committee which conducted what was one of the biggest regattas of those days.
Apart from Scotch's win, 1898-99 was a quiet season, the only winning crew being the Senior Four at Upper Yarra. Sloan also won a Maiden Scull event. He was selected in the Inter-colonial Eight but declined. The club was not represented in the Champion Eight or Four, but McNamara, who enjoyed success in Junior and Maiden Sculls during the season, raced unsuccessfully in the State Championship Sculls.

The final season of the decade, 1899-1900, was the time of the South African War. A number of promising members left Victoria with the Second Australian contingent. The club was unable to boat a Senior Eight. Despite this the membership rose back again to about 50, and the club enjoyed renewed success.

Barclay Connor, who had succeeded Morell as bow in the Senior Four, was transferred to the country, and his seat was taken by Percy Ivens. Lisle Jones succeeded his brother Victor as cox. Syd Edwards continued as coach.

The crew lost to Albert Park in the Champion Fours, but made amends at the Upper Yarra and V.R.A. regattas.

At the V.R.A. Regatta, Strong and Sloan were beaten by Jim Donald and Chamley of Albert Park in the senior pair. Sloan immediately dropped Strong and replaced him with Ivens, who had been stroking a Maiden Eight, but was in fact spending most of his time in a scull. The new combination won at Ballarat a few days later, as did a Maiden Eight with Albert Lindblade and Ted Bradshaw in the bow and two seats.

The season saw two Inter-colonial Eight races, one on the Lower Yarra, in November 1899, and one at Brisbane, in May 1900, both being won by Victoria. Sloan was selected in the first crew, but declined. And then, Ivens was unavailable for business reasons and Sloan, Potter and Strong all declined selection in the second race, which, because of Federation, was the last Inter-colonial boat race. Despite the convenience of having Scotch boating from the Mercantile shed, Sloan was having difficulty in finding the time to devote to his activities as an oarsman and coach with Mercantile, and as coach with Scotch College. But however he used his time, he used it well, as Scotch once again won the Head of the River, in the last four oared race for that event.