The story of Mercantile in the 1890's is one of success upon success. It was a period in which the club became established in a pre-eminent position among the rowing clubs of Victoria. J. B. Whitty was president until the end of the decade. Cunningham was replaced as captain by H. Dunn (1892-1893), F. R. Millar (1892-3) and then Frank Gibbs took over the position and held it for several years. Of the many family traditions associated with Mercantile the Gibbs family is the oldest, as not only Frank Gibbs' nephew Allen, but also Allen's son Peter, have been Mercantilians over the years. Frank Gibbs served the club not only as captain but also as treasurer, oarsman and coach.

Syd Edwards was the coach under whose direction success originated. 1891-2 saw a double success at Upper Yarra, a Junior Pair of Ernie Dawson and Stokes, and a Maiden Four in which Harold Lindgren, who was to become one of Victoria's finest oarsmen, rowed the three seat. All three were in a winning Maiden Eight at Bairnsdale and went on to greater success. 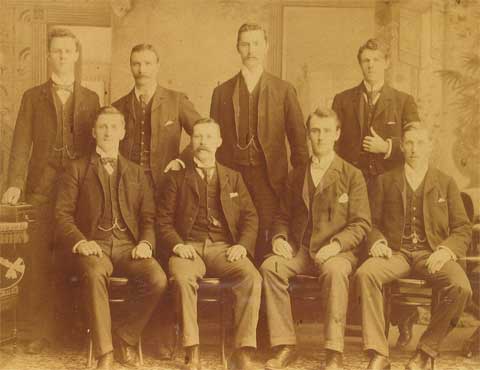 In the following season (1892-3) the club won the Maiden Pair at Upper Yarra, Colac and Warrnambool, Maiden Four at Barwon, Junior Four at Richmond Regatta, Maiden Eight at Warrnambool, and the Junior Eight at VRA (Melbourne) Regatta. W. H. T. (Herb) Davis was selected in the two seat of the Victorian Inter-colonial Eight. 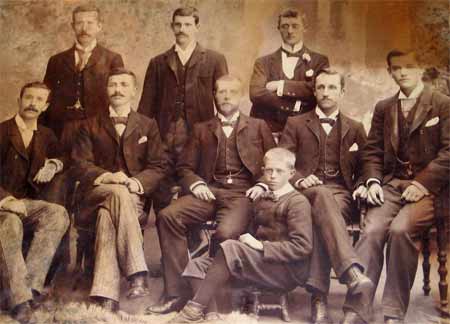 Although the membership was still only at about 50 the club now had a strong group of junior oarsmen and was ready to move up into senior ranks. In the 1893-4 season it boated a Senior Four for the Champion Fours of Victoria. The crew, Dawson, Strelitz, Lindgren and Davis (stroke) with Victor Jones as cox was coached by Syd Edwards.

The systematic manner in which the coach started on the task with four comparatively new men and the enthusiastic way the crew followed his lead were recollected by many for years after. The crew showed great promise and the four members were so keen that for some weeks they even resided together; but it brought no immediate success as the race for the champion fours was won by the Yarra Yarra crew for the fourth year running.

However, the senior four had its first win three weeks later in the Nichols Cup at Upper Yarra Regatta. In fact, it won the race twice, Mercantile having again offended the umpires, and a re-row having been ordered due to an infringement. The same crew went on to win the Senior Four at the Richmond, Melbourne and Bairnsdale treble. At Bairnsdale, Dawson and Lindgren won the Senior Pair as well, whilst Frank Gibbs stroked the winning Maiden Pair. Victor Jones, the cox, had a busy day steering the three winning crews at Bairnsdale.

In this season, for the first time, the club boated a crew in the Champion Eight, and although Mercantile was unsuccessful, the race being won by Wendouree, Davis and Lindgren were selected in the Victorian Inter-colonial Eight. Davis, however, declined his selection and was replaced by an up and coming oarsmen from the Electric Telegraph Club - A. B. Sloan. Victoria won the Inter-colonial Eight on the Lower Yarra course that year, the first of 12 consecutive victories.

The season 1894-5 was a time of severe financial depression. Yet although the merchants were struggling, Mercantile was flourishing.

A most significant event in the story of the club was the success of Syd Edwards in prevailing upon Alex Sloan and Stephen Morell to leave Electric Telegraph and join Mercantile. Sloan had won the Junior Pair for Electric Telegraph at Melbourne Regatta in the previous season and had rowed in the Inter-colonial Eight. Morell and Sloan had both rowed in Electric Telegraph's winning Maiden Four at Upper Yarra and at Warrnambool in 1892.

Electric Telegraph had never been a particularly successful club. It had suffered a severe setback with the Greenlands fire in 1885, had no clubhouse of its own and had difficulty in maintaining continuity with frequent transfers of its members by reason of employment. It offered little future for men like Sloan and Morell. It looked like folding up, and, with the loss of its two outstanding junior prospects, it had little future success before it disbanded.

Despite some opposition from within the club, the two seat of the Senior Four, which had been rendered vacant by the transfer of Strelitz to Western Australia was immediately filled by Sloan as Edwards had planned. He fitted in splendidly. However, during the course of training Davis had to quit for a time and the crew thus lost its stroke. Frank Gibbs was brought up from the juniors into the two seat and Sloan moved up to stroke!

The setbacks could not be quickly overcome and the crew was beaten by Wendouree after a great race in the Champion Fours. Mercantile won a fortnight later at Upper Yarra, but Wendouree did not race.

Davis then returned to the stroke seat, Sloan went back to No. 2 and the stage was set for the "race of the century" against Wendouree at the Ballarat Regatta.

The race attracted immense interest. No-one from Ballarat would hear of Wendouree being beaten. There was a big attendance and much excitement. Wagers were high. The race itself was magnificent. Nothing separated the crews as they raced up the old Ballarat Regatta course towards View Point, but Mercantile got up in virtually the last stroke to win by 2 1/2 feet.

The Senior Four was again successful a week later at Barwon. A crew was chosen to represent the club in the Champion Eights but it did not start. Four Mercantilians were selected into the winning Victorian Inter-colonial Eight; two of the blades which they used are still hanging on display in the clubrooms.

Also of significance during the season were wins in the Maiden Pair (Upper Yarra) and Maiden Eight (Barwon), showing that the club was not overlooking the importance of having good young oarsmen coming up for the future. Harold Lindgren also showed his versatility during the season by winning a Maiden Scull at Barwon.