The 1884-5 season opened with the fourth annual general meeting at Young and Jackson's. On this occasion the enormous contribution by Boyd to the formation of the club was recognised by the presentation to him of a silver watch by F. Williams on behalf of the members.

But Boyd's greatest task had yet to come.

In 1884 the demolition of the old Princes Bridge was commenced and by September 13, 1884, the temporary wooden bridge had been constructed alongside the existing bridge, which was scheduled for demolition. 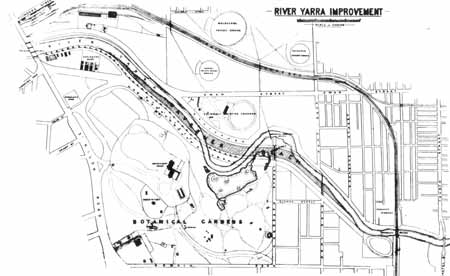 In September 1884 the Board of Land and Works granted an application by the club for the lease of land 40 feet by 100 feet at the site of the present clubhouse. This was Crown Land. It was part of what had been known as Brickfields, or Brickmaker's Ground, in the 1840's. The site was swampy and below the high water mark of the lagoon.

Messrs. Lewis and Whitty presented the club with a set of silver mounted crystal claret jugs as the prize for the Mercantile scratch eights. They were to be known as the Borax Soap trophies. The entry fee was a half crown per oar. The winning crew was stroked by Gowdie of Albert Park. Although there were 174 entries, only £20 was raised for the club.

Boyd had another success this season, stroking the winning crew, containing three other Mercantile members, to win the VRA Combination Eights race to celebrate the opening of the season.

In February 1885 tenders were advertised for the erection of a two storied structure based on a foundation of piles and consisting of a 30' x 65' ground floor area with a 30' x 20' dressing room as specified by the architect, a club member, William Campbell, of Reid, Henderson and Smart. The tender of £350 with an additional £80 for piles as submitted by H. & P. Bradley, of Albert Park, was accepted.

Erection of the new boat shed began in August 1885 and good progress was made so that the building was ready for the opening on the Saturday afternoon of October 17, 1885. It was a very proud day for the young club and for William Boyd, and certainly a grand affair. A table well laden with wines and other refreshments extended the full length of the shed. The 200 friends and members of the club present heard Mr. S. P. Lord, who was invited to preside, commence the proceedings by proposing the toast "Success to Rowing". This was followed by others including "The V.R.A." and "Patrons and Visitors". After enjoying a sociable hour or two Mr. Lord, amidst loud cheers, drew aside the door and declared the shed duly open. The clubhouse was described by "The Argus" as "the latest edition to the handsome cluster of buildings replacing the former dingy sheds".

To finance the undertaking, the sum of £300 was raised by £5 debentures taken up for the most part by members. The balance came from donations from a number of patrons in the business community and from proceeds of a monster bazaar and Bruce Auction held in the St. Kilda Orderly Rooms, which raised close on £100.0.0. 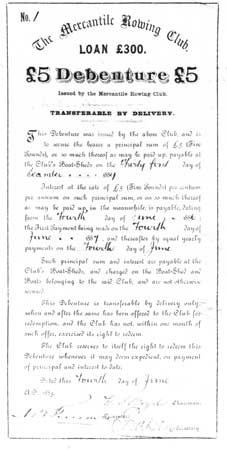 During the preparations for the new shed the club met with success, winning its first Maiden Eight at the Upper Yarra Regatta.

For three men in the crew Boyd, Trood and F. W. Williams it was their second win, having been members of the successful maiden four in 1882.

The 1885-6 season began with the fifth annual general meeting held at Young and Jackson's on September 15, 1885. Boyd was chairman and gave a history of the club since its inception in 1880 and a description of the clubhouse progress. It was at this meeting that it was agreed that the entrance fee to the club should be increased from 10 shillings to £1.0.0, and also to increase the subscription to £3.3s., a large amount in those days.

The Club took delivery of a new stock of boats from Greenlands and was now an independent entity, both as to boats and premises. This was fortunate indeed as on April 21, 1886, Greenlands' old shed was burned to the ground and Yarra Yarra, Electric Telegraph and Scotch College lost all their boats.

Fortunately for Yarra Yarra, the Victoria Rowing Club disbanded in June, 1886 and its 13 boats and their oars became available. Yarra Yarra purchased the boats and took over Victoria's tenancy at Edwards' new boatshed, moving back to Greenlands when the new Greenlands shed (at the site of the present Melbourne Grammar Boathouse) was completed.

During 1886 all the Princes Bridge clubs were greatly inconvenienced by the work of widening the river being carried out in front of the boathouses. The widening of the river in front of the boatsheds did not, incidentally, overcome all the flooding problems. As late as 1891 Harvey Duggan noticed the river rising rapidly. With great presence of mind he rushed across the bridge to Young and Jackson's where he found 20 members who went back to assist him to secure the boats to the racks. The boathouse became awash but thanks to Duggan's alertness and the convenient situation of Young and Jackson's, no damage was done to the fleet. A thick slime was left when the water subsided. The two boatbuilders Edwards and Fuller suffered the most, losing some of their household effects.

In 1886, magnificent silver salver trophies were presented to the winners of the Mercantile club eight race by Gippsland Hop Bitters Brewery. The boats for the races were lent by Civil Service Rowing Club and by Melbourne University Boat Club. And not content with local competition in 1885 efforts were made, unfortunately without success, to organise a challenge race against the club's namesake in the colony of New South Wales, Mercantile (now Mosman) Rowing Club. There is no record of similar efforts to arrange a challenge with the Tasmanian counterpart, now Derwent-Mercantile of Hobart.

A nucleus of successful oarsmen had originated from the first winning crews. Boyd had his last win with A. Jacobs in the Maiden Pair at Upper Yarra Regatta in 1887. Jacobs was also to win a Junior Four at Albert Park in 1888. C. S. Cunningham and V. F. Mason rose from the first winning Maiden Eight to be among the club's first successful oarsmen in junior ranks following a win in the Maiden Four (Richmond Regatta 1886), Maiden Pair (Richmond Regatta 1887), Junior Pair (VRA Regatta 1888) and Junior Four at Albert Park in 1888.

The 1889 season saw a new group of members gaining success. Up to that time the club had won one Junior Four, one Junior Pair, one Maiden Eight, two Maiden Fours, and two Maiden Pair races. Not perhaps a remarkable record on present day standards. But there were fewer Regattas, and intense competition in those Regattas, which attracted large crowds and commanded great public interest. A regatta success in a Maiden event was regarded as a far greater achievement than in more recent years. And for the fledging club the wins were of immeasurable importance. They proved that the club was a viable entity which could look forward to ongoing success and achievement. It was established in its own premises with its own small fleet. It had a sound administration. Indeed, one of its members, W. H. T. Davis, was appointed secretary of the Victorian Rowing Association 1885, becoming the first of a number of Mercantilians to serve in that responsible position.

The success by a new group of members in the Maiden Eight at the Upper Yarra Regatta in 1889 was the only win for that season. Only one of that crew, W. Davis, was to go on to further success. But it ushered the club into a period of outstanding success in the 1890's.

C. S. Cunningham, having taken over from Boyd as captain in 1889, did not win any further races for the club, but had the honour of being the first club member selected to represent the colony of Victoria in the Inter-colonial Eight in the 1890 Season. Cunningham was to gain further distinction in later years when he was appointed one of the three Olympic selectors and accompanied the Australian Eight to the Stockholm Olympic Games in 1912.