The 1881-2 season got off to a bad start when the Trial Fours were postponed due to the flooding of the river. The final was eventually rowed on Thursday evening November 10, 1881, and was won by a crew stroked by W. S. Boyd. Boyd rowed number three in the winning crew in the Club Fours event from Punt Road to Greenlands on December 3, 1881.

The following Saturday saw the club's first entry in an inter-club regatta at the first regatta held by the Upper Yarra Amateur Regatta Association on December 3, 1881. W. S. Boyd was stroke, weighing 9 stone 11 pounds, and F. W. Williams bow at 9 stone 6. F. Vernon was cox. The club colours, then as now, were light blue and white. The event was the Maiden Pair. Other competitors were Yarra Yarra, Melbourne, Banks, Victoria and Electric Telegraph Rowing Clubs and Melbourne University Boat Club. Mercantile drew Melbourne in its heat.

The Mercantile crew showed the determination and spirit which was typical of Boyd, and was to become typical of his club, but a regrettable lack of discretion. The crew "jumped the gun", its rudder caught the arm of the boatholder in the stake boat and was broken. There was not enough time to return to the landing for a spare, so when the race was restarted, Mercantile was rudderless. The regatta course was upstream from Princes Bridge to the Baths Corner at the bottom of the straight below the Botanical Bridge. The course was buoyed and north station had 15 yards start. A big crowd lined the banks.

This time the starter succeeded in getting the crews away to a fair start, and Mercantile on north with the advantage of the start, immediately went to the lead. However, during the race the crew continually crossed Melbourne's course. Mercantile crossed the finish line first, but Melbourne protested. The umpires, who included Edward Carlile, allowed the protest and Mercantile was quite rightly disqualified.

Boyd's next attempt to win at the Upper Yarra Regatta in the following year was also unsuccessful, and involved another unpleasant incident.

The final was postponed. The Regatta committee met at Young and Jackson's on the following Monday at 5 p.m. to consider the protest. Mercantile was not represented on the committee. After a lively debate the committee declared that as Mercantile had been defeated by Melbourne in both races, the club should gracefully withdraw the protest. The meeting adjourned to enable a deputation from the committee to have discussions with Boyd and Williams, who were waiting outside in the public bar.

After a thirsty discussion lasting some 30 minutes the deputation returned to the meeting to advise that Boyd had conceded and the protest withdrawn. The final was eventually rowed without Mercantile on March 29, 1882. 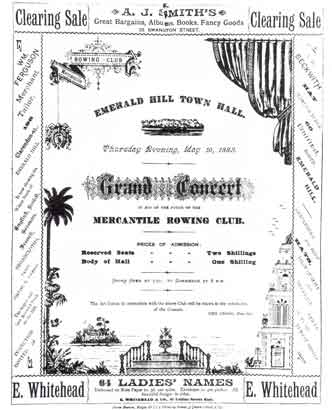 In the following year, 1883, Boyd made another attempt to win a trophy at Upper Yarra. This season he and H. J. Garrett had joined the committee as Mercantile's representatives. But again Boyd was unsuccessful. This time he was rowing in the seven seat behind Williams in the Maiden Eight, which met Yarra Yarra in the semi-final. Mercantile jumped away at the start, but Yarra drew level and a thrilling see-saw race developed down the straight to the Baths Corner, with Yarra winning by only two feet.

The history of the association between the sport of rowing and Young and Jackson's Hotel is yet another story. But Young and Jackson's was not the only watering place for thirsty oarsmen. In the days when training row consisted of a swing up to Punt Road and back, thirsty city oarsmen would often break their journey half way and visit the Sir Henry Barkly Hotel (now the Riverside Inn) where they would be sure of meeting friends from the Richmond Rowing Club, which was next door. A visit to Young and Jackson's was almost an unavoidable habit after a row, as the oarsmen walked across the bridge to their tram or train.

The first success for the new club was at the Melbourne Regatta in December 1882, on the Lower Yarra Course. Mercantile won the Maiden Four. The crew was W. S. Boyd (Bow), H. Garrett (2), C. S. Trood (3), F. W. Williams (S), and Weston Pitt (Cox). A photograph of this crew was presented to the club in late 1920 by Weston Pitt.

The win was a wonderful achievement with regard to the difficult circumstances under which the club was operating. Its fleet at this time consisted of a clinker built rowing four, an old clinker built Edwards Eight, which is believed to have been the first Eight ever to have been built in Victoria, and an open pair of even greater age. There were insufficient oars to permit even this small fleet to be used at the same time. This particular maiden four borrowed a swivelrigged boat to which it was quite unaccustomed, having been used to the more common poppet rowlocks. The news of its success was conveyed back to the boathouse at Princes Bridge by one of James Edwards' homing pigeons, which he kept in his loft and which were used to bring back results of races rowed on the Footscray (Maribyrnong) or on the Lower Yarra courses.

Later in the same season a Mercantile crew raced professional watermen in a non-amateur race and crossed the line in first place. However once again Mercantile was disqualified for a foul committed during the race.

Clearly the social highlight of the club year was the Mercantile Grand Concert held at the Emerald Hill Town Hall on Thursday evening, May 10, 1883. An Art Union held in conjunction with club fund raising was drawn at the conclusion of the evening. The program consisted of fourteen vocal and pianoforte performances. 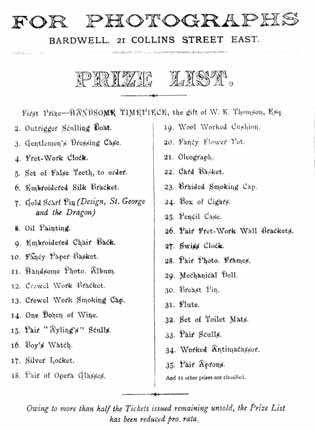 The club had prospered during this season, and it was reported at the annual general meeting held on September 18, 1883, that the club was in a most satisfactory position. Membership had increased by some 28 members, and after the expenditure of £102.0.0, a credit balance of £7.7s was remaining.

It was in the next season of 1883-4 that the club decided to build its own clubhouse and £33 was raised towards that goal. And it was also in this season that the club could boast a most distinguished patron, none other than the Governor, His Excellency The Marquis of Normanby.

Although the club could not boast of a long list of success at regattas, the club's crews obtained creditable positions in their respective races. Club members performed well in both the V.R.A. Scratch Eights and in the Scratch Eights at the Hanlan Aquatic Carnival. Both winning crews contained four club members (the maximum permissable) and were stroked by Mercantile members F. W. Williams and F. Gregerson respectively. Twenty two eights competed in V.R.A. races and twenty two at the latter event.

Despite the lack of regatta success the club finished the season in better condition than any other active club on the Yarra.