Competitive rowing had commenced in England between professional watermen on the Thames as early as the sixteenth century. The first moves into competitive amateur rowing did not develop until the establishment of the Leander Rowing Club in 1818 and of the University clubs of Oxford and Cambridge which rowed their first boat race on June 10, 1829. Not long after the first settlement in Australia competitive rowing commenced in Sydney harbour with crews from various ships in port. Gradually amateur oarsmen came to take an interest in the sport with contests being arranged between four oared boats in 1832 and later scullers in 1837. Regattas for both professional and amateurs increased in number in Sydney during the following years and attracted great public interest.

The first regattas in the district of Port Phillip were held on the lower Yarra on January 21, 1841, and in Geelong in 1847.

At these regattas the competitors were chiefly watermen, but some events for amateurs were included, particularly at the Geelong Regatta. On March 10, 1857, the first regatta was held on the upper Yarra, events being chiefly for watermen, many of whom plied for hire between Melbourne and the upper reaches of the Yarra about Richmond and beyond. The natural rivalry of these men resulted in the starting of this regatta, which did not carry on after 1859 because of lack of funds. Some events for amateurs were included in these programs and an impetus was thus given to amateur boat racing. It was in this period that several amateur rowing clubs were started. The Elswick was the first Melbourne club established; then in order, came Ariel, University, Leander, Melbourne, Richmond, Young Australia, Banks, Civil Service and Prince of Wales.

The first meeting of the Melbourne Regatta Committee was on March 21, 1860. His Excellency the Governor, Sir Henry Barkly, was appointed president, and Mr. C. Farewell (Melbourne City Treasurer) Hon. Secretary. A program prepared by Professor Irving was adopted at the next meeting on March 23, 1860. The date was originally fixed for April, but as there was only three outriggers in the Port Phillip district, it was decided to postpone it so that more might be built.

On May 4-5, 1860, the first Melbourne regatta was rowed with nine races on the program, over a course from "Morgan's Ferry" (near present Henley finish) to the corner above the Richmond Punt (Punt Road). The site of the finish proved bad from a spectator's point of view. At the regatta of 1861, the course was one of a mile and a quarter, from a chain or so east of Princes Bridge to about the same distance short of the Botanical Bridge at Anderson Street. There were about 2000 spectators present on each occasion.

Experience at two regattas, on the narrow twisting course around Baths Corner, and past trailing willows, showed the committee the need for a change. The 1862 regatta was rowed on the lower Yarra to the junction of the Saltwater River "in sight of the village of Footscray". It was estimated that 10,000 people were present. 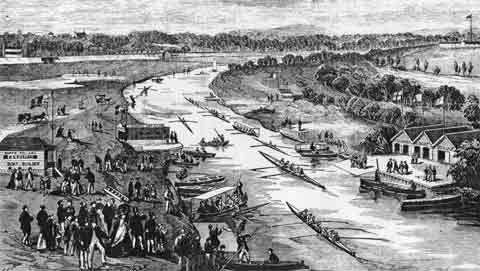 1867 Easter Monday on the Yarra River from a lithograph in The Australian News.

This publication described the scene as follows: As seen from Princes Bridge in the early part of the day, the view was very pleasant. Lots of young men from the warehouses and public offices were testing the endurance of their muscles and the speed of their skiffs; and boatmen were busy freighting their craft with excursionists, who were bent on heading up the river till they should find some convenient nook on its banks where to spread their picnic.

The Melbourne Regatta Committee managed this regatta for sixteen years, promoted several Intercolonial races, and became the arbiter in rowing matters in Victoria. In 1876, chiefly through the work of Mr. Justice Hood (Supreme Court of Victoria), the Victorian Rowing Association was started and took over the management of the Melbourne Regatta, and rowing affairs. In 1906, an amended set of rules gave the Association entire control of all amateur aquatic events in the State at which any of its members competed. 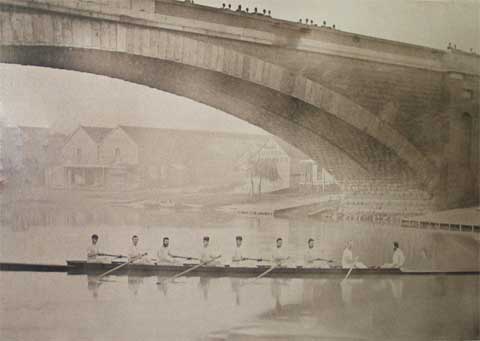 The committee consisted of 10 elected members and of one representative from each club subscribing £10 annually to the association. The committee was to exercise the powers conferred by the rules, and to have the rights, powers and privileges formerly possessed by the Melbourne Regatta Committee.