Chapel Street Bridge was constructed in 1923 by Sir John Monash and replaced an old iron bridge imported from England in 1856, which had originally been designed for use in the Crimean war. The bluestone footings of the old bridge can still be observed under the southern arch.

Through Chapel Street Bridge and the Cremorne Railway Bridge is the start of the present 2000 metres rowing course. From this point onwards the river has undergone enormous change and what was called Taverner's Reach, and is now known as the Henley Course, is in fact an artificial canal.

In the early years of Mercantile the river was barely wide enough for two rowing crews abreast. It followed a tortuous path. The southern landing of the original Punt Road Ferry would have been almost at midstream as the river is now.

The river then flowed along willow-lined banks out onto what is now Yarra Park. The bridge at Anderson Street was originally known as Monier Bridge and was later named after former Mercantile oarsman and club president Sir Stephen Morell. It was erected on dry land in 1889 in substitution for the original Botanical Bridge which stood near the site of the present army depot in Batman Avenue. The river then flowed back across its present course at "new cut corner" and over to the Botanical Gardens. The lakes presently in the Botanical Gardens are part of the original course of the river and an associated billabong. Traces of the original course are the dips in the roadway along Alexandra Avenue. The present river is the result of the River Improvement Scheme carried out in the 1890's.

Until Olympic Park was upgraded for the 1956 Olympic Games, the boathouse which was the "city branch" of the Preston Rowing Club was situated within the park on the north side of Batman Avenue. It had been used by Preston and by some other suburban clubs when training for city regattas, and its landing stage near what is now the 800 metre starting point was frequently used by other crews for changing oarsmen.

As the old Melbourne High School staging near Chapel Street has also disappeared, there is now no staging suitable for rowing boats between the Princess Bridge staging and Herring Island.

Brander's Ferry was at the site of the present Swan Street Bridge from the mid 1850's until it fell into disuse prior to the 1914-18 War. There was a timber landing on the north bank and steps with handrails led to the water. Brander lived in a picturesque boathouse situated amidst quite thick foliage on the south bank. Brander expanded his activities to include refreshment rooms and the hire of pleasure boats, and A.C. Bahlmann, a subsequent proprietor, added a miniature zoo and aviary.

It was a very popular and romantic spot, particularly on regatta days, when gentlemen with their ladies would sit on the cast-iron chairs at little tables and observe the racing with the aid of a glass of wine or a cup of coffee, to the music of a German band.

The refreshment kiosk was washed away in the 1891 flood, and the boathouse was moved back to the foot of the slope of the Domain to allow for the widening of the river five years later.

Prior to the river improvements of the late 1890's there was no bicycle path for coaches as there is today. Most coaches sat in the coxswain's seat, or stood in front of their boathouses. In an article in the Victorian Rowing Register by M. S. Glynn published in 1878, a contributor under the pseudonym "Chump" begged pardon "for venturing a few modest criticisms on the present style of teaching" rowing. "The best place for a coach is the stern sheets of another boat, if a crew can be obtained fast enough for the purpose. Lacking this, a ride on horseback, or, faute de mieux, a run along the river bank by the side of the crew, should be resorted to. It is true that the Upper Yarra presents difficulties not easily surmounted by pedestrians or horsemen, but I believe a good view might be obtained of a racing craft from horseback over the two-mile course between the Melbourne Sheds and the Church-street bridge, and for a shorter distance effective coaching may easily be done by a pedestrian."

Around the bend approaching Princes Bridge once was the Elswick Rowing Club, the name of which is perpetuated by the Elswick Challenge Fours on the Henley Regatta Programme. It was washed away in the floods of 1863. At the rear was the depot of the colonial militia of the age, the Victorian Volunteer Engineering Corps, with its pontoon storage shed near the River. The commanding officer's residence remains near the Dorchester. The original single span Princes Bridge did not cross the river in a line with Swanston Street as does the present bridge, but at an angle. Despite the annoyance caused by the back up of floodwaters behind the bridge, it had the advantage of frequently replenishing the reedy lagoon immediately behind the site of the Mercantile Rowing Club, which was a popular spot for taking photographs of crews in the early days. In 1880 the rowing scene was quite different to what it now is. The present individual boathouses had not yet developed. When occupation licenses were first issued by the Board of Land and Works in 1883, there were only three licenses for the land east of Princes Bridge, R. S. Fuller (80 feet frontage), J. Edwards (160 feet frontage) and Melbourne Rowing Club (80 feet frontage). In the early 1900's occupation licenses were held by J. W. Jerram (boatbuilder), J. Edwards and Son (boatbuilders), Melbourne Rowing Club, Mercantile Rowing Club, W. T. Greenlands (boatbuilder), Banks Rowing Club, and Messrs. Norris, Outhwaite & Beilby on behalf of Yarra Yarra Rowing Club and Melbourne University Boat Club. In 1917 the Melbourne City Council took over the management of the area from the Board.

In the early days James Edwards had a public boathouse on the north bank just east of the then Princes Bridge, at what is now known as Princes Walk. Opposite, on the south bank he was to erect a larger boathouse alongside R. S. Fuller's boathouse immediately adjacent to the Bridge. Fuller's business subsequently was taken over by Jerram. Downstream between the bridge and the paper mills stood the substantial boathouse operated by W. T. Greenland. 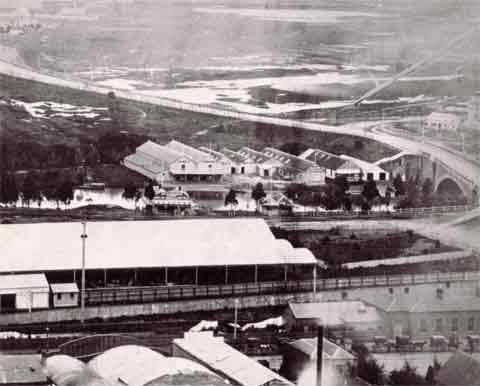 Looking south from the city over the new Edwards Boatshed.

Most of the city rowing clubs did not have their own boathouses but stored their boats in the premises of the boatbuilders, or hired boats from boatbuilders. It was convenient to hold meetings and other gatherings at Young and Jacksons Hotel. Victorian Rowing Association meetings were held at the hotel until July, 1907, when they were moved to the Amateur Sports Club.

New boathouses were then built. Fuller (Jerram) was alongside the new Princes Bridge, and to the east side of Fuller's was Edwards' new boathouse, both of which were demolished in the 1920's when, at the instigation of Sir Stephen Morell, then Lord Mayor of Melbourne, Jeffries Parade was diverted behind the boathouses to protect the rowers from the increasing motor traffic. For some years thereafter Jerram carried on his business on the top floor of the Richmond Rowing Club boathouse. Next door to Richmond was the Melbourne Rowing Club, which after years of inactivity amalgamated with the thriving Civil Service Rowing Club in 1923. Like Mercantile, both Melbourne and Richmond were to suffer disastrous fires. The top section of the original Melbourne Rowing Club was burnt out on October 24, 1948. The original Richmond Rowing Club was destroyed in 1926 and again was completely gutted in 1971. The present building was erected in 1973. Next came Mercantile Rowing Club and then the Melbourne Grammar School boathouse. The school had taken over the Greenlands site. The Melbourne Grammar boathouse was burned down in 1951, giving rise to the present building. Then there is the venerable structure of the Banks Rowing Club. Yarra Yarra Rowing Club was destroyed by fire in January, 1927 and rebuilt on the present site. Finally, there is Melbourne University Boat Club, which still operates from its original building. The old boatbuilding firms have gone, but some of the boats which they built are still to be found in storage racks in country boathouses. Indeed two fixed-seat fours built by Edwards nearly eighty years ago are still in use for the annual New Year's Day regatta at Anglesea.

Below Queens Bridge once stood the major wharves and warehouses of the Port of Melbourne. They were cut off in 1930 by the erection of Spencer Street Bridge. The old swinging basin now has been substantially reclaimed for carparking areas.

It was here that John Batman landed in 1834 and where the present Customs House was erected in the 1850's. Sailing vessels and steamships used to line the wharves. Boats and barges abounded. A small steam ferry operated on the site of the present Spencer Street Bridge linking Clarendon Street with Melbourne and there was also a ferry at the site of the Johnston Street Bridge until that bridge was built in 1978. Thus the Yarra stretched down to the present Victoria Dock where much of its volume dissipated itself into swampland.

The river itself, still comparatively narrow, flowed across towards the present New Footscray Road to join the headwater of the Maribyrnong River near the present Shepherd's Bridge. The Maribyrnong River at this point was a major shipping point and wharves, warehouses and old pubs stood behind the rows of ships landing at the wharves along its south bank and extending up to the present Dynon Road Bridge. It was here that early Inter-Colonial races were held. The Coode Canal was completed in 1887 bringing the Yarra to its present junction with the Maribyrnong, from which point it flows down to Port Phillip Bay.