During the winter months of 1867 Edward Carlile had painstakingly measured the Yarra River from Princes Bridge to Dight's Falls Bridge "along the centre of the stream". On October 16, 1868, he dutifully recorded those measurements as follows: 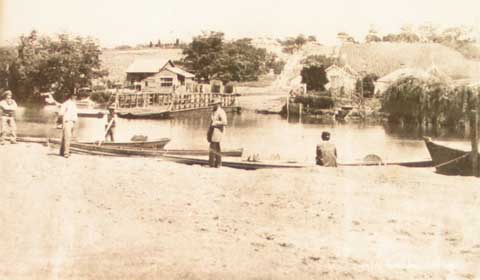 Edward Carlile was a thorough and painstaking man. He was the Victorian Parliamentary draftsman and as such was responsible for much of the legislation which rules our lives today. He was to become Sir Edward Carlile K.C., and President of the Civil Service Rowing Club from 1891 to his death in 1917. He had only modest success as an oarsman, but maintained a fanatical interest in the sport of rowing. His services were greatly sought after at Regattas, and he became the leading Regatta official for the V.R.A. and Chairman of the Henley Regatta general committee.

If we were to return down the river as it was when Edward Carlile took his measurements, we would find many changes which had occurred since the time of John Grimes in 1803. But even at the time of the foundation of the Mercantile Rowing Club the river was vastly different to what it is today.

The Johnston Street Bridge seen by Carlile was a wooden structure erected in 1858. It became affected by dry rot and had to be propped up by a staging which, surprisingly, survived the great flood of 1863. An iron bridge replaced it in 1876, and this in turn was replaced by the modern four lane bridge in 1957.

Rowing downstream from Johnston Street the Studley Park bank has changed very little over the intervening years. The rugged terrain has not lent itself to development and the native flora continues in its abundance.

On the west bank amidst the suburbs of Collingwood is the farmland of what was until 1976 the Abbotsford Convent. Primary industry continues along those river flats in the form of a flower garden conducted by Mercantile member, Geoff McMahon, for the supply of his florist business.

Further downstream, on the west bank, farmland gives way to factories built right to the edge of the high river bank, and the beauty of Studley Park is in sharp contrast to the dingy and dilapidated buildings opposite.

Edward Carlile would not have recognised the Collins footbridge at Gipps Street, Collingwood, which had earlier been the site of Hodgson's Punt in the 1840's. He would find no trace remaining of that extra-ordinary monstrosity, the Studley Park Bridge, which formerly joined Studley Park Road with Church Street, Abbotsford, at the bend in the river immediately below the footbridge. Known as "The Penny Toll Bridge", this timber pile bridge was the first bridge in this section of the river, being constructed in 1857.

Revenue from tolls declined sharply following the opening of the Johnston Street Bridge and the Penny Toll Bridge fell into disuse and disrepair. In November, 1880, public meetings were being held to discuss its fate. Nothing was done, as the company which built it had been wound up, and no one would accept responsibility. Eventually, the problem solved itself when it was washed away by floodwaters and what remained was dismantled in 1906. 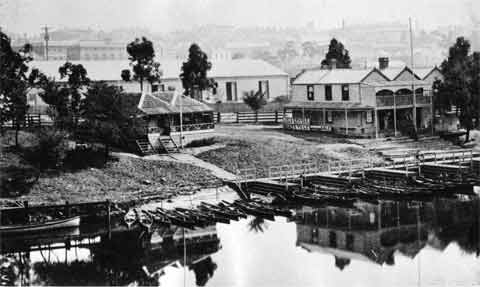 Snakes and tortoises are still to be found in the bush and scrub on either side of the straight below the site of the old Penny Toll Bridge. The straight itself now is dominated by the modern industrial complex of the Abbotsford Brewery, a far cry from the relatively primitive operations conducted by that brewery on that site in 1880.

Chinese market gardens which were conducted in this area have gone. The new Metropolitan Fire Brigade College is on the site of the recently demolished buildings of Shamrock Brewery. Further down the next straight, past the Walmer Street Footbridge (erected in 1891), are the beautiful symmetrical bluestone arches of an old tannery, now ivy covered and derelict, but under the protection of a classification from the National Trust. On the opposite side of this straight, prosperous market gardens are still conducted on the river flats behind the over-hanging willows.

Around a sharp bend is Victoria Bridge at the boundary of Kew, Collingwood, Hawthorn and Richmond. In September, 1880, at the very time of the founding of the Mercantile Rowing Club, meetings were being conducted by the engineers of the surrounding municipalities as to the design and cost feasibility of this bridge and the extensive earthworks required. The contemplated bridge was not completed until 1884. It has since been strengthened and widened.

The reach below Victoria Bridge is a remarkable contrast. Mansions were built on the eastern bank, whilst the flats on the west side were utilised for factories, tanneries and wool scouring works, which still exist.

The present Hawthorn Bridge was erected in 1861, just south of the site of a punt, operated by James Palmer from 1842, which had been succeeded in turn by a wooden trestle structure. It was at this point that the Burwood Road horse tram used to connect with the Bridge Road cable tram.

The old Xavier College boathouse just below Victoria Bridge was washed away, boats, oars, and the lot, in the great flood in 1934 and was replaced by the present sheds now used by Carey Grammar School. The new Xavier boathouse now stands alongside the older Hawthorn Rowing Club at Hawthorn Bridge. As if it were not bad enough for Xavier to lose its boathouse and fleet, worse was to happen. The college boathouse, when sailing downstream, collided with the Hawthorn Rowing Club boathouse then situated just north of the Hawthorn Bridge. The two boathouses then proceeded downstream in the direction of Scotch College where, when the flood receded, a couple of old tub pairs were found in the silt. Hawthorn then built its boathouse on the south side of the bridge. Formerly Boroondara Rowing Club, Hawthorn Rowing Club dates from 1877. Opposite Hawthorn, Richmond High School now stands on what were river flats built up above flood level by use as a rubbish tip.

The river at the bottom end of the Hawthorn straight has hardly changed over the past 100 years. An aboriginal canoe tree still stands on the east bank.

Underneath the Wallen Road Bridge is the site of the former Hawthorn Tea Gardens. The river flats on the left were merely paddocks until the 1920's when they were converted into the beautiful Fairview Park. John Gardiner, the first settler in the Boroondara area, from whom Gardiner's Creek derives its name, built his home in what is now Fordholm Road, Hawthorn.

The lush river flats and stony rises where Scotch College now stands were settled by William Glen in 1860. His property extended up to and beyond Glenferrie Road.

Passing St. Kevin's College and its boathouse is a section of the Yarra which is an artificial canal. The river originally ran on to the area now covered by the South Eastern Freeway but in 1969, when this section of the freeway was constructed, it was deemed less expensive and more convenient to divert the river rather than to bridge the freeway. This involved the demolition of the existing iron railway bridge and the elimination of a bend in the river and two picturesque straights. The bend, with its associated sandbanks, had for years been a popular swimming spot for the local children. The parklands in this area were formerly known as the Government Survey Paddock.

At the corner above the Grange Road Bridge the river resumes its natural course in what was formerly known as Twickenham Reach. The boathouse of the penny ferry which operated at the site of the Grange Road Bridge up until its erection in 1934 was demolished with the construction of the freeway. This bridge is named after Sir Macpherson Robertson, a chocolate manufacturer, who personally bore the cost of its construction and donated it to the State of Victoria.

The river continues in its natural course with artificially landscaped banks past the Power House Rowing Club and the Wesley College Boathouse to Herring Island. This island is man-made. The original course of the river proceeds around the southern side. On the northern side there had been extensive quarrying in the 19th century and thus it was a relatively simple task in association with the flood prevention measures in 1923 to blast away the side of the quarry and allow the river through. The inundated quarry is now the depot of the Board of Works. Future plans involve the cutting away of a section of the southern end of Herring Island.