"We shall gather at the River"
Att. James G. Sprigg

The river has been there for thousands of years. Its water was fresh and clear. For the most part it flowed gently down into Port Phillip Bay, but at times it was restless, and surged out onto its flood plain, replenishing its swamps and billabongs. But then it would return to its bed and resume its leisurely flow to the sea.

The Wurundjeri tribe, through whose land it passed, referred to it as Birr-arrung. Its modern name Yarra Yarra derives from the Aboriginal word "flowing flowing" which is an apt description of the river over the years and as it is today. The Old People left little mark upon the river. They fed on its fish and water fowl. They camped by it, and held corroborees at its banks. They drank its water. Their bark canoes were the only craft to float on it, but their canoes were utilised more as a platform for fishing than as a means of transportation.

The river was overhung by willows and wattles and its river flats and swamps were studded with river gums and native flora. It supported an abundance of bird and animal life.

Perhaps it had been visited by the Portugese navigators who charted the south coast in the 16th century. They are believed to have landed at Corio Bay, and the wreckage of their mahogany ship near Warrnambool is well documented. But, if the Portuguese sailed into the lower reaches of the Yarra, they left no trace of their presence. Port Philip Bay was not officially discovered until 1802.

The first recorded exploration of the River was by John Grimes in 1803. He was Surveyor General of the Colony of New South Wales, and came to the Port Phillip District with a small exploration party. He first ventured up the Saltwater River, now known as the Maribyrnong. Initially Grimes had considered the Yarra to be the lesser stream, understandably so having regard to the comparative widths of the water courses at the old junction. Grimes returned down the Saltwater and he then set sail up the Yarra.

Grimes and his party had to manhandle their boat across the Falls, a rock barrier which extended across the river near the site of the present Queens Bridge, which effectively prevented salt water from sullying the fresh water stream.

Dight's Falls has been the head of navigation for oarsmen since Heidelberg Rowing Club became defunct in 1947. Grimes arrived at Dight's Falls on February 8, 1803, and a commemorative cairn has since been erected in his honour. Then he came back downstream and departed. The river resumed its peaceful existence with little premonition of changes to come.

Great changes had occurred between the landing at Melbourne of John Batman in 1834, and the foundation of the Mercantile Rowing Club on September 19, 1880. 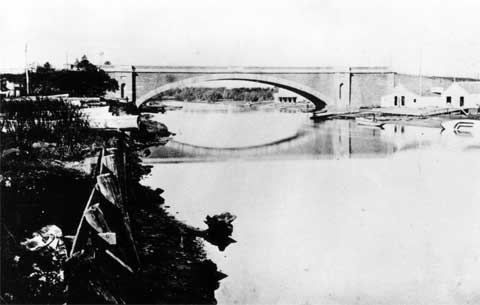 Princes Bridge looking east in about 1870. Greenlands boatshed, the first home of Mercantile, is on the right.

In 1880 the river still followed its natural course. It was still a narrow stream overhung by wattles and willows. The water fowl remained, but the aboriginal people had gone. As a result of the blasting away of the Falls near Queens Bridge the river was now tidal up to Dight's Falls. A wooden toll bridge was built in 1845 and was replaced by the original single arched Princes Bridge five years later. Unfortunately the new bridge had the effect of obstructing the passage of flood waters. The natural run off had been increased by land clearance, and the river was prone to regular and disastrous flooding.

The river became the main drain for the largest city in Australia. Its waters were polluted by industrial effluent from the factories, tanneries and wool scouring works along its banks. No longer could the populace use it as a domestic supply. The pollution had been the cause of a serious outbreak of typhoid, and water was now reticulated from the reservoir which had been constructed at Yan Yean.

But there was no sewerage system. The river acted as the city's sewer as well as its drain. Night soil carters surreptiously dumped their loads into the river, the Johnston Street Bridge at Abbotsford being a popular disposal place. Industrialists and land holders with their vested interests continued to frustrate efforts to clean up the river. It was not until 1887 that the present sewerage system was commenced. Sewerage has not been a problem for many years but only recently have the efforts of protectionists to prevent the discharge into the river of industrial waste been rewarded with appreciable results.

The first settlers had ignored the warnings of local aboriginals and were totally unprepared for the first major flood at Christmas, 1839. Thereafter riverside property was repeatably inundated. The problem was aggravated by water backing up above the old Princes Bridge and flowing over the site of the present rowing clubs, and the brick kilns then operating in the present Alexandra Gardens. A great flood in 1863 overflowed the approaches to Princes Bridge, which became impassable. To overcome the problems caused by the lack of foresight of the early settlers, a plan was considered for a canal from above Princes Bridge to the sea through South Melbourne. This did not eventuate. What was to result in the latter years of the 19th century was the extensive river works which gave rise to the river of today. 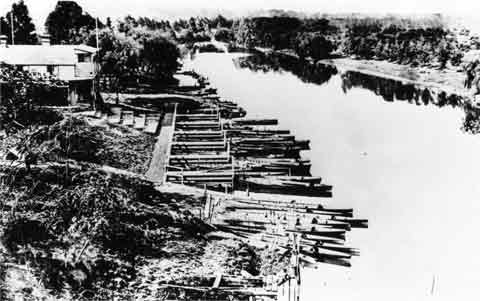 The Yarra looking east from the old Princes Bridge showing Edwards original boathouse on the left.

Boating on the river was popular from the first days of settlement. Ferries to Williamstown and to South Yarra were important means of transport in the early years, but had difficulty in competing with land transport. A half hourly service between Princes Bridge and South Yarra was discontinued in 1946. An attempt is now being made to revive this service between Princes Bridge and Anderson Street (Morell) Bridge, the ungainly craft "Saona" and its disproportionate wash adding to the more accepted frustrations of the oarsmen. Pleasure cruises were very popular in the early days to the Cremorne Gardens in Richmond near the present railway bridge, and in more recent years to the Hawthorn Tea Gardens, on the site of the present Leonda Restaurant. After a break of some years an attempt was made to revive this service in November, 1976, and seems to be continuing on a spasmodic basis.

There were many professional oarsmen and boatmen who operated the ferries and punts which were a necessary means of crossing the river as distinct from travelling along it. Before the erection of the bridges, punts had operated at the sites of Queens Bridge, Princes Bridge and Punt Road. Smaller oar-propelled boats operated ferry services across the river through the dock area and further upstream. There was Morgan's Ferry (above Princes Bridge), Brander's Ferry (near Swan Street Bridge), the Twickenham Ferry (at Grange Road Bridge), and the ferry at the site of the Walmer Street Footbridge between Kew and Collingwood. At one time Twickenham Rowing Club was based at the Twickenham Ferry, and Leander Rowing Club rowed from Morgan's Boathouse, at about the site of the present Judge's Box, in the 1860's.

A successful regatta between professional watermen on the Upper Yarra on March 10, 1857, gave impetus to the formation of rowing clubs, with a view to arranging competition between their own members. Interclub competition inevitably had to follow.

Many rowing clubs were formed. The oldest of those still in existence is Melbourne University Boat Club, founded by Professor Martin Howy Irving on September 3, 1859. On that day Professor Irving was a member of a crew which raced and defeated a crew of four bank officers. Professor Irving went on to become principal of Hawthorn Grammar School where he established the sport of rowing. In the 1880's annual four oared competition between Hawthorn Grammar School and Kew High School attracted quite as much public attention as the competition between the Public Schools.

Other Regattas were established in Metropolitan and country areas. The Regatta at Lake Moodemere, conducted by the Murray Rowing Association dates from 1860. Melbourne Rowing Club was founded in 1862, Ballarat Rowing Club and Richmond Rowing Club in 1863 and Civil Service Rowing Club (now amalgamated with Melbourne Rowing Club) in 1866. But there were many other clubs then in existence which have not withstood the passage of time, and many more clubs, including Mercantile were still to be formed.