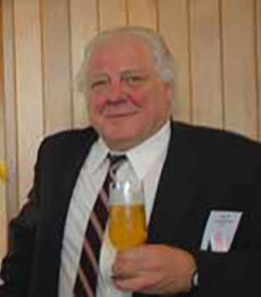 David was a long serving and deeply involved Vice-President of the Club. He always had the Club front of mind. David joined the Club whilst still at school in 1956. By the time of his death, he had been a member for 65 years.

He was the consummate clubman. His contribution to the Club through his rowing, his considerable administrative support, maintenance of his rowing friendships and often just his presence, made him a great Club member. He was never happier than in a boat or at the bar at the Club. He clearly loved his rowing club and the friendships made.

Rowing for David started when he joined the Club in 1956 and began racing in a beginners pair at the 1956 Christmas regattas.

David also rowed at Scotch College but sadly, with days to go before the Head of the River, had to withdraw from the first crew through illness. His son Guy went onto win a Head of the River.

His first full season with the club was in 1960-61 after leaving school. He raced junior fours and eights including Christmas and Easter regattas. His first big win was in the Founders Challenge Cup at Australian Henley where the Mercs junior eight won by only 1 foot after thrilling finishes in both heat and semi-final.

In the next season, David raced in the Club’s senior eight winning several races but a good Banks crew thwarted their success in the Championships. He also did win the open race at the Head of the Yarra.

During this period the depth of senior oarsmen was significant and it was difficult for a young oarsman like David to break into the senior ranks. With the Commonwealth Games in 1962 along with the first World Championships in Lucerne and 1964 Olympic Games, all senior oarsmen were racing. His regularity in the senior crews was a great credit to him. In the 1962-63 season, David raced the State Championship eights in a composite crew which was defeated by the Mercantile crew.

David continued racing through to 1965-66 season after which his name no longer appears as a rower.

In the late 1960s, David reappeared as one of the instigators of the Cock Robins, a group of recently retired rowers who rowed socially. 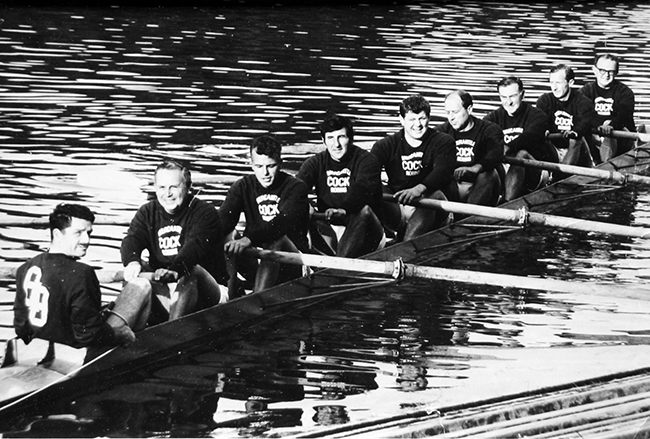 The Cock Robins in 1969 with David in the five seat

In summary he had a successful senior rowing career in a period of great success at Mercs.

David’s assistance was sought to help the Club with the rebuilding of the boathouse after the May 1973 fire. He was elected to the Committee and used his business skills to great effect.

In the 1975-76 season, David took on the newly created Social Manager position.

During his active time at the Club, some of the most memorable Club functions were undertaken with David’s assistance and organisation. In 1978, he hosted a Henley Night BBQ at his home, the Boathouse in River Retreat in Kew, with some 150 members attended. He also was of great assistance in the Christmas party that year at which 400 people attended.

He did marvellous work in jointly organising Barrel’s Bash parties with others including Barry Gross (desc), Andy Evans (desc) and the sole survivor Phil Batters. These parties raised large amounts of money for the Club and were great fun. In 1996, he joined the ranks of the Vice-Presidents.

Once his business life had settled down, he loved nothing more than going out three mornings a week in a double scull with the Late Rob Strang. Scotch College allowed them the privilege to boat out of the school and they were hosted by their mutual friend Bob Lachal, who worked there at that time. He loved their company. He noted that they probably talked more than they rowed, and given their age and flexibility, he added that the second half of the slide was never really threatened.

Outside rowing, he was an entrepreneurial businessman with diverse interests - prominent Melbourne restaurateur of the famous Nutcracker restaurant, orientated to long lunches and excellent hospitality but which closed with the advent of the fringe benefits tax, wine maker, food and grocery merchant and property investor. Many rowers of the Nutcracker era recall enjoying the Mercantile Sunday Barrel before then enjoying a steak at the Nutcracker.

A great clubman and great friend and supporter of the sport.

David on the right and wife Jenny on the left with his best mate Andrew Evans and his wife.