Richard excelled as a rower, coach and administrator for most of his life. He continues to enjoy the sport by rowing in a Mercantile masters eight with many of his peers.

Richard had his first row as a boy with his grandfather and renowned coach, Keith Bilney. He then took up rowing at Wesley College at the end of year 8.

In response to the question of why rowing, Richard responded: I was really good at cricket up to year 8 but it took way too long and was too boring. My grandfather had already introduced me to rowing and it was much more active and fun so a really easy choice. An unlikely early win at a year 8 junior school regatta against the teachers was a possible insight into why Wesley won in 1984.

His most memorable races were quite a mixture. Obviously, his Head of the River and National Championship wins whilst at school are up there. Also his National Championship in the lightweight pair when that was, at that time, a highly competitive event, was clearly a very important race. But there are some others of interest. His win in the 1988 Victorian Championship Lightweight Eight ranks well as the crew was largely full of uncredentialled rowers against two crews from MUBC who were full of highly credentialed rowers. Furthermore, MUBC was coached by a former Mercantile coach who had defected to MUBC. It was a sweet victory. Racing successfully with his cousin in America was a great thrill. Finally, Richard recalls the many Dimboola regattas where after imbibing well the night before, and sleeping under the stars, and then racing the next day, usually with success. 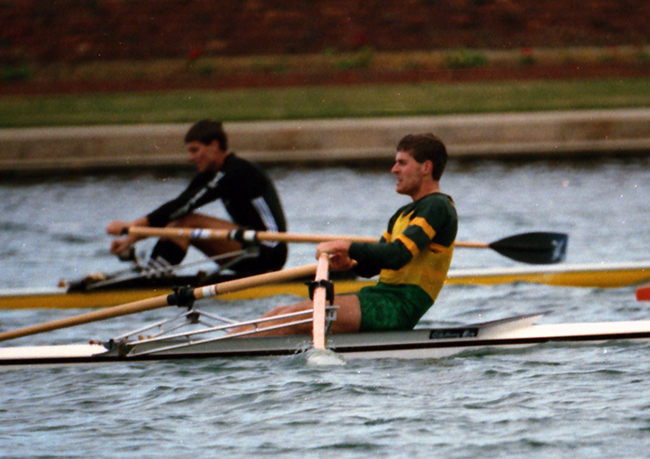 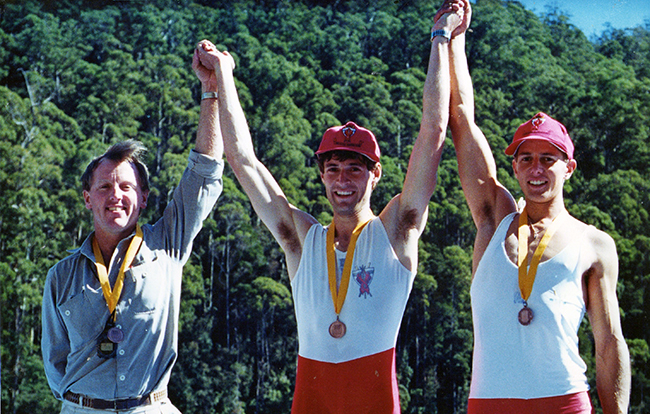 Why did he join Mercantile? My grandfather was a renowned coach and member at Mercs and that Palf [David Palfreyman] coached the Wesley first crew I rowed in and Pincus [David Pincus] coached me in year 10. There was no other place to go.

Your correspondent did not get off unscathed in the interview being accused of pushing Richard into many administrative tasks at the Club from his early years in the 1980s, right through to 2013. Having coached and team managed Richard and having gained a good appreciation of his excellent administrative skills, the comments are well grounded.

1989 - 1991 - Co-founder and organiser of the Yarra Bank Sprints, which was recognised by Concept 2 as the "The Australian Indoor Rowing Championships".

1989 - National Lightweight Four Championship, stroke - Finalist but final not conducted due to a cyclone

1989 - National Lightweight Eight Championship, stroke - not conducted due to cyclone