Ted was a humble and gentle man who was a significant contributor to the sport of rowing in Victoria. He devoted a large part of his life to both the Yarra Yarra Rowing Club and Victorian rowing.

Schooled in Melbourne at Auburn Central School and Swinburne Technical College, he started his working life during WWII in 1942 at the age of 14 as a stores clerk at Metro Ice and Fresh Food Co at two pounds a week. He was a younger brother of three with his two older brothers being far older than him. After his brothers married, Ted took on the primary responsibility for his mother's welfare and lived with her.

He spent the last 12 years of his working life to 1990 as the Financial Controller of the Australian Dairy Corporation - a task involving significant responsibility and money. He was a competent and thorough person and these skills were applied to the benefit of Yarra Yarra and Victorian rowing throughout his life.

He joined Yarra Yarra Rowing Club in 1948 being introduced by Jim Wilson, a fellow member of the Legacy gymnasium group.

He was not a champion rower.  In fact he did not compete in his first few years at Yarra Yarra. The first record of Ted winning a race was in an intra-club competition, the Yarra Yarra Memorial Fours on 1st August 1953 in a crew with Jack Prime, Frank Potts and Bill Burton. His next victory was two years later in the Henley quarter mile sprints on 14th March 1955. He was in the five seat of the Yarra Yarra maiden eight. From the 1960s, he was an active oarsman and raced as a masters rower in many regattas including several Heads of the Yarra. There was a club tradition of rowing on Christmas Day and he was a regular in the four seat of that crew. In 1968 he purchased his own scull and did a good amount of sculling.

However most of his fellow club members recall his most dramatic row at Wentworth, Easter 1992. It is a well known story and we are most grateful for the assistance that was given to him.

He was out rowing in the two seat of a four when he suffered a heart attack so severe, that he 'died' before he hit the water - no water reached his lungs. Fellow club member and the stroke, Mark Brown jumped into the water and retrieved him. The other crew members Jim Skidmore, Ron Mitchell and Laurie Muir commenced resuscitation whilst changing seats to fill the empty stroke side to avoid the boat rolling over. They radioed for assistance. A houseboat owner rushed to assist in his speed boat and transferred Ted to his houseboat. Fortunately a paramedic lived nearby and was waiting with an ambulance by the time Ted reached shore. Despite remaining unconscious for sometime, and surviving bypass surgery, Ted went onto to live a full and interesting life thereafter, some additional 21 years. 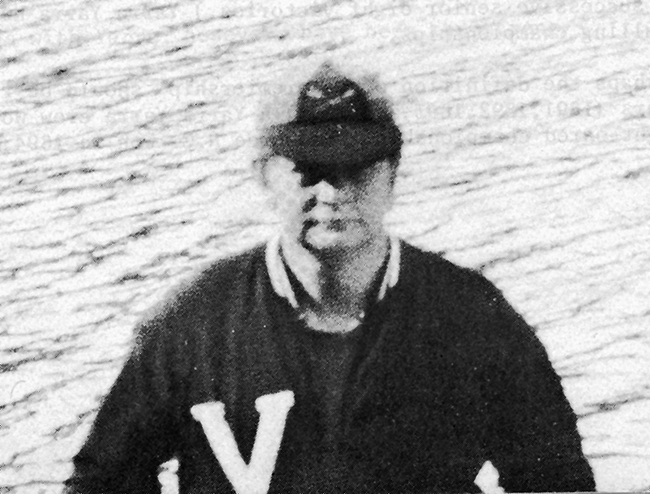 Despite not having a noteworthy rowing career, he started a stellar rowing administration career. The following summary provides an outline of his work.

In further recognition of his service to Yarra Yarra Rowing Club, three boats were named in his honour in 1961, 1991 and 2002. For services to the club, a boat was also named in his mother's honour. 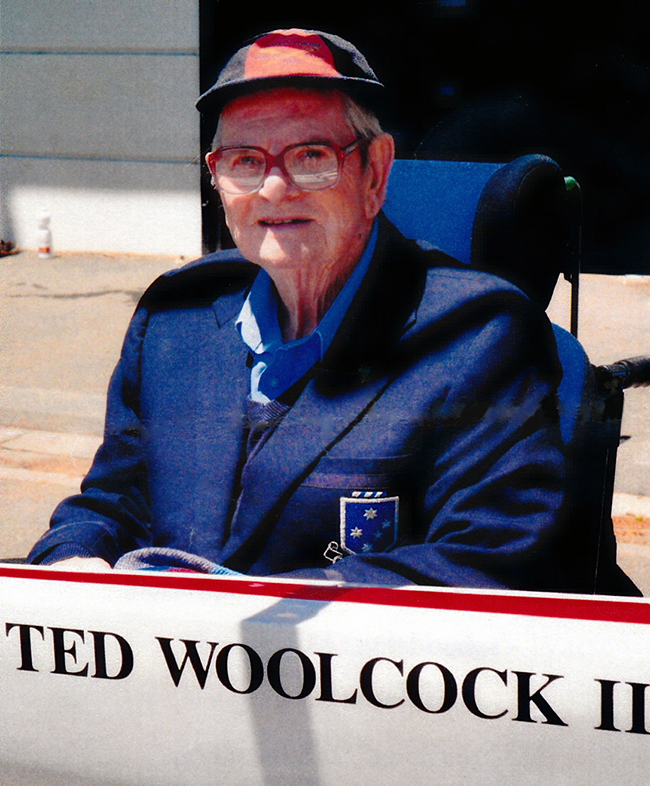 Ted Woolcock in 2002 at a boat naming in his honour

Peter Gill in a letter to Ted in July 1980 upon his retirement as Secretary, summed up the thoughts of many within Yarra Yarra Rowing Club both then and after: Your approach has been significant towards maintaining stability within the club. You have at times probably borne more work than was your share because others did not sustain enough effort. So, I believe your efforts have been an important factor in the club's successes during the past 25 years.

Others recalled a simpler memory, namely that as secretary, he always had a pen at hand so that he could collect outstanding dues and issue a receipt. Clearly no one at Yarra Yarra was safe from outstanding dues with Ted about!

Ted also live a full life outside the sport of rowing. He was a great contributor to Legacy. He joined "Melbourne Old Boys" in 1944 and spent 30 years as its Secretary. He was also assistant secretary, secretary and the chairman for 10 years of the Northern Branch of Legacy.

He was a mason and joined Lodge Henley, a rowing Lodge. He served as assistant Secretary, Almoner and as Master from 1980. Despite that Lodge closing, he remained active throughout his life, attending a daylight Lodge.

Locally he assisted his local community in several ways. He was secretary, treasurer and coordinator of his Neighbourhood Watch group. He was also an unofficial supporter of the elderly, doing messages, shopping and even taking dogs for a walk.

Ted loved his various communities and made sure that he contributed to them. He would not have regarded his contribution as a chore - he fully comprehended that those who contribute, get far more back in return.

We need more Teds in this world.