Claude was a successful maiden and Junior oarsman pre World War One who enjoyed his rowing and Club life. He was a regular participant in intra club racing. 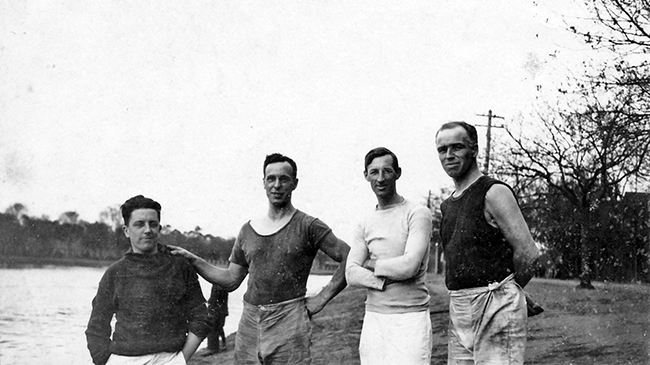 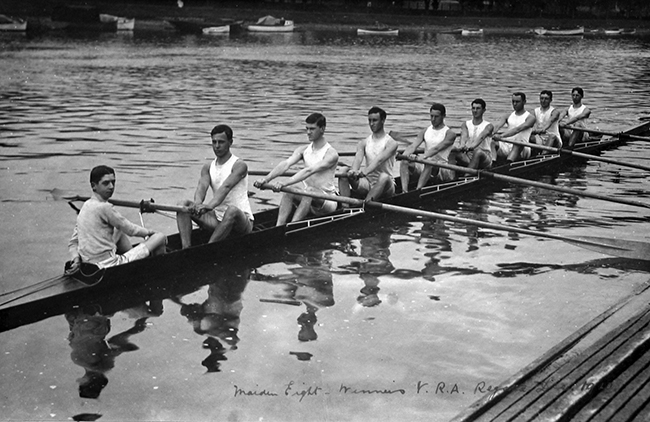 1910 Maiden eight with Claude in the bow seat 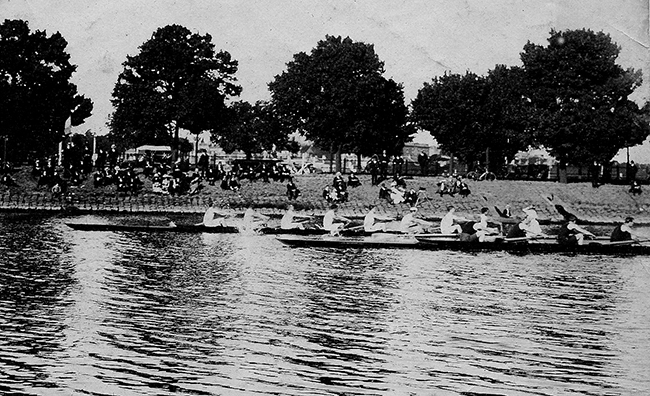 Finish of the 1911 junior eight win

1911 winning junior eight with Claude in the bow seat

The 1938-39 Mercantile annual report recorded his death during that season as follows:

Mr Claude Vanderkelen was a member of many years standing. An excellent Club man, who could always be depended upon to lend a helping hand, his charming personality endeared him to all with whom he was associated. As an oarsman he was a model of neatness and efficiency and did well in regatta racing. His death in the prime of life is greatly to be regretted, but it is pleasing to know that the name is being worthily upheld in the Club by his two sons.

Claude was a gemmologist who practised in Melbourne.

His grandson Michael Vanderkelen has provided the following further information which greatly enhances our understanding of Claude. His love of cars and the outdoors becomes very clear. Also his community service including being an special constable during the Police strike of the 1920s and also honorary consul for Belgium.

“Vandie in his car still puts on the side, If you live out his way you’re sure of a ride.”

So went the lyrics of a song composed for members of Melbourne’s Mercantile Rowing Club in 1918. By this time 28-year-old Claude Vanderkelen had clearly shown his love of the internal combustion engine which in a suitable motor car could deliver him to the great outdoors to row, go shooting, camping or just plain driving.

Just before his parents Francois and Alice left for Europe in early 1905 Claude, nearly 15, was admitted as a border at Geelong Grammar on February 7, according to the Geelong Grammarian: a biographical register, published in 1996.

Claude in 1905 as a Geelong Grammar student

It is not clear if Claude was a border for more than a year, but the publication says he won a prize for bookkeeping in 1906. Youngest brother Victor too, was a border at Geelong Grammar between 1917 and 1918.

While horse drawn travel provided by services like Cobb & Co, was still a major means of local transport along with rail, the country was soon to usher in the era of the automobile, a mode of travel that clearly Claude loved all his adult life.

Claude on the beach as a young man - possibly Mornington

A passion for the outdoors-the beach or the bush- is evident in Claude’s mementos, including photographs and written or printed materials. It is possible that the location above was the beach at Mornington.

Like his father, Claude’s story is best told by newspaper references and through various mementos that have come down the years, rather than anything specific he said. Of the few pieces of correspondence to have survived are two post cards addressed to his uncle Rene when Claude was visiting Sydney and Brisbane. Thought to have been sent around Christmas 1906, when he was about 16, one card asks “how Bess is getting on” suggesting uncle and nephew had formed a bond after Rene had arrived in Melbourne two years earlier. The “Bess” was Bessie Barber whom Rene married four years later.

Perhaps the interstate trip was small recompense for Claude having not gone to Europe with his parents a year earlier. Maybe Rene, at that time living in East Melbourne, had played guardian to Claude and Jules in the absence of the rest of the family. But eight years later, in 1914 when his father, mother Alice and younger siblings Sue and Victor embarked for a trip to Europe, Claude and Jules were running F. Vanderkelen & Co. In May of that year his appointment as honorary Belgian consul during his father’s absence was announced in the Herald.

By February 1916, the magazine Table Talk had reported on the wedding of Claude to Clare Liley at St John’s Church of England in Toorak, noting that the “Wedding luncheon was served at Scott’s Hotel, but the celebrations were very quiet owing to the recent death (six months earlier) of the bridegroom’s mother.”

Clare and Claude married in 1916

Clare Liley had much variety in her young family life. Her parents, George Angus, aged 65, and Amy Mary Mathews, aged 34, had married in 1893 after the death of George’s first wife. Clare was born in 1893 and had a sister Eva.

George died in 1894, aged 69, after which Amy bought or rented a small shop and dwelling in Railway Place, Williamstown where she lived with Clare, Eva and Caroline, the youngest daughter of George Angus’s first marriage.

In 1896, when Clare and Eva were still toddlers and Amy was only 39, she met and married 77-year-old Captain William Liley, a former ship’s pilot who lived on the Strand in Williamstown. Liley died just three years later in 1899.  Amy sold the Williamstown house and moved to Brookville Rd in Toorak. Again, she bought or leased a retail shop generating enough income to send Eva and Clare to school at Toorak College. Soon after Amy met a banker, Frank Cuddy, and with her two girls would move into his house in Selbourne Grove Toorak. Amy died in 1918 at 55 just two years after Clare and Claude were married.

Less than a decade on, as signs of the Depression began to effect the family business, Claude and Clare embarked in 1929 on the P&O ship Ortranto for England where he rented a car to tour around. They continued to the continent visiting Italy, France, Holland, Switzerland and Belgium where he visited Francois’ birthplace Overijise and Tevuren where his grandfather was buried.

Like Francois, Claude enjoyed shooting as much as for the time outdoors as for the result; the game that ultimately found its way onto the family table because of trips to Lilydale, Balwyn, Werribee or even further afield.

Claude’s son Phil remembered how a love of food dictated an occasional hunter/gatherer ritual in a then semi-rural area of Melbourne.

“Dad would sometimes arrive home to Stradbroke Ave early on a Friday and be keen on some quail for dinner. Getting the gun and game bag he would bundle me and “Chum” the pointer into the car and we would head out Bourke Road to somewhere near Doncaster Rd, North Balwyn.

“Here Dad knew some Chinese market gardeners who allowed him to shoot on their land so we would head out in search of quail-Chum in front, Dad next with the gun and me following behind like a porter with the game bag over my shoulder.”

Plucking the birds and preparing them for the table was, said Phil, a chore that fell to Clare, not Claude.

Early in his life Claude began his love affair with the internal combustion engine whose arrival in the form of the automobile- if you credit Karl Benz- preceded Claude’s birth by just five years. Away from the family business in the city, a motor car was an integral part of a life lived outdoors.

In 1906 the Royal Auto Club of Victoria began issuing a form of driver’s licence to competent drivers. These certificates were the only independent proof of driving ability available.

Competent he no doubt was but in 1913, just three years after driver’s licences were introduced by the State Government, Claude’s penchant for the open road saw him run foul of the law when in June of that year he appeared before the bench in Prahran and was fined 10/- on each count for riding an unregistered motor bike and being without a licence.

Thereafter he quickly progressed to owning a range of prestigious European motor cars which family history says he liked to drive quickly. But, if he had other brushes with the law in his cars, evidence of these indiscretions accompanied him to his grave.

Upgrading from an early two-wheel love affair with a side car, he bought and sold a variety of cars as the means to unite him with the outdoors-in the fastest way possible. A single seater Fiat was followed by a Scat and then in 1923 a sports model Itala which had won hill climbs in Italy.

In November 1923, 600 of the metropolitan police in Melbourne went on strike against the system of supervision by plain-clothes constables, known as “spooks.” The strike began on the eve of the spring racing carnival and the city experienced riots and looting. Shopfronts were smashed and a tram was set alight in Elizabeth Street. After a week of disorder Lieutenant General Sir John Monash was put in charge of a special constabulary of 5000 men, of which Claude was one.

Somewhere in Claude’s automotive inventory was a French machine he christened The Monster for reasons, one assumes, that it challenged even his driving skills.

Claude seen with the Monster, a 1928 De Dion, somewhere in regional Victoria

His next car was a sports Delage and then a Delage DR70. He had imported a Delage DR70, a French made beast, in 1930 contracting the coachwork for the car to the Melbourne firm of James Flood. Eventually turning his head to the United States, Claude’s last car before his premature death in 1939 was a 1934 Buick.

By the time his sons Peter and Phil had reached their early teens they were loaded, along with a car tent, into the Delage and with Claude tackling the then modest Geelong Road at speeds of up to 70 mile they would head to camp at Point Roadknight near Anglesea.

The car tent was crafted by the last Norwegian sailmaker in Melbourne and consists of three “rooms”. The Delage could be parked under cover in a square central room, on either side of which the roof of the large tent sloped away to provide adequate sleeping and living quarters.

Among its regular outings the motor car would regularly convey Claude to Mercantile Rowing Club on Melbourne’s Yarra River where rowing seemed a logical fit for someone who enjoyed life outdoors.

Those who formed the Mercantile Club in 1880 had a common interest in their association with the various mercantile warehouses established in Melbourne around Flinders Street and Flinders Lane. This association, together with the nearby city location of Francois’ importing and indenting business, may explain why Claude chose to join Mercantile.

Thank you Michael Vanderkelen for these insights.