2019 - Inducted into the Victorian Rowing Hall of Fame 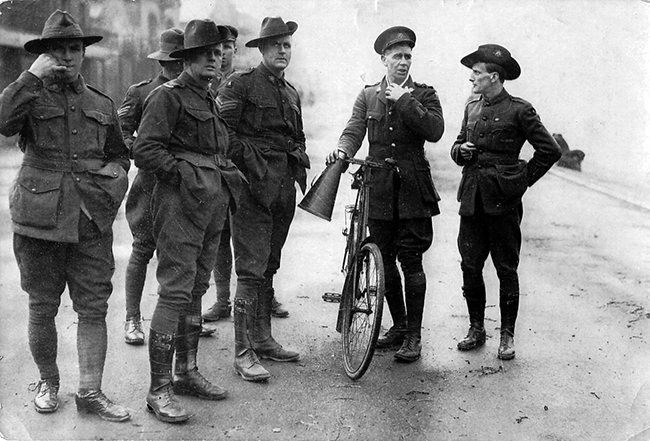 He did great work in 1919 establishing the rowing section of the AIF Sports Control Board in February 1919. He was a member of the sub-committee charged with identification, recruiting, selection and coaching the AIF crews. The AIF No 1 crew won the King’s Cup at the Royal Henley Peace Regatta in July 1919 and that trophy is now the perpetual trophy for the Men’s Interstate Eight Oared Championship of Australia.

He was also a three times winner of the King’s Cup in key seats in three starts, and he raced with greats of Victorian rowing – Chamley and the Donald brothers. He was a distinguished soldier, Military Cross and Bar. I quote from his citation: Throughout the whole operation (which owing to the precipitous nature of the country was beset with difficulties and dangers) this Officer evinced tactical instincts of a very high order.  With brilliant dash and admirable courage he repeatedly led his men under galling Machine Gun fire against enemy positions, outflanking and overcoming the enemy’s resistance, till the objective was gained.  His great gallantry, coolness and tenacity inspired all about him, and to him must be attributed the greater measure of the success of this operation.

He was also an excellent coach until his untimely death being murdered by an intruder at his house. The esteem with which he was held is illustrated by the thousands of mourners who lined St Kilda Road to witness the mile long funeral procession. Every section of Victorian society was represented.

He was a giant of his time and brought great fame to the sport.

Educated at Melbourne Church of England Grammar School (1897-99), he represented the school in football and rowed in the first eight and four. In 1901-02 he won the Victorian Champion VIII's title for the Albert Park Rowing Club and in 1902-04 represented the State in the victorious interstate eight-oared crew.

After studying brewing under Auguste de Bavay, bacteriologist of the Foster Brewery, Melbourne, Tulloch was brewer at R. Marks & Co., Maldon, Victoria, in 1904-06. For the next two years he was head brewer at the Swallow Brewery, Perth. In that city on 15 April 1908 at St John's Anglican Church he married Lillian Jane Temby.

A commissioned officer in the Citizen Military Forces, Tulloch joined the Australian Imperial Force in January 1915. As captain in the 11th Battalion, he landed at Gallipoli on 25 April. He was wounded that day while achieving his objective, the southern slopes of Battleship Hill, and was probably the closest officer to enemy lines until repelled.

Recovering in Australia, he was posted in October 1917 to France where he was gassed in the second battle of Passchendaele and fought on the Somme at Cappy. On 23 August 1918 near Chuignolles he commanded two companies and captured Froissy Wood; on 18 September at Hargicourt, near Villeret, with two others Tulloch overpowered and captured the crews of two enemy machine-guns. He was given command of the 12th Battalion and awarded the Military Cross and Bar.

On his return Tulloch took up a senior position at the Victoria Brewery where he worked until his death. He was an original member of Legacy and was gazetted in 1921 lieutenant-colonel, 22nd Battalion, Commonwealth Military Forces. He coached the Melbourne Grammar first eight which won the Head of the River in 1923 and finished second in 1924. That year he was appointed to the Old Melburnians council.

Early on the morning of 8 May 1926 he disturbed an intruder in his room at the boarding house, Lauriston Hall, East Melbourne. During a struggle Tulloch was fatally shot. No motive for the killing could be established and the identity of the murderer has never been discovered.

Tulloch's funeral was conducted with full military honours. After a service at Melbourne Grammar chapel, the procession, more than a mile long, proceeded to Brighton cemetery by way of St Kilda Road which was lined by thousands of people. His wife, who had been in Sydney receiving medical treatment, survived him; they had no children.

A cry of “I have got you now” were the last words spoken by decorated soldier, businessman and MGS First VIII Rowing Coach Eric William Tulloch (OM 1899). Tulloch had retired to bed early on 7 May 1926 after an impromptu dinner dance at Lauriston Hall boarding house in East Melbourne to celebrate the School’s emphatic win in its heat of the Head of the River on the Yarra. In the early hours of the following morning, Tulloch had disturbed a burglar and had characteristically sought to disarm and capture him. In the struggle that followed, Eric Tulloch was shot through the heart and died at the scene......

Understandably, in the wake of the news of their coach’s murder, the distraught 1926 crew had some decisions to make. In the end the decision was a simple one, as they believed that Eric Tulloch’s wishes would have been for them to compete in the final as planned. A brilliant race ensued with Scotch College being the ultimate winners by a canvas length from Geelong Grammar School, with Melbourne Grammar two feet away in third place.

He was accorded a funeral with full military honours; thousands of mourners lined the mile-long funeral procession along St. Kilda Road (“every section of society was represented in the crowd...so still was the throng that the rattle of breach bolts as the cartridges were driven home, was heard to its farthest limits”).