George Towns made good use of his time in the UK and worked for Aylings boat builders.  Towns established his own very successful boat building business in Australia.

Colin Charters in his book Just Add Water - the Times an Tides of Newcastle Rowing Club, published by Seaview Press 2009, provides the following profile on Towns.

George J J Towns (1869-1961), the 'Hunter Crack', is undoubtedly the most successful oarsman the Newcastle region has ever produced. He won the Sportsman Challenge Cup for the championship of England in 1899, successfully defended the title in 1900, became the world champion sculler in 1901, held the title until 1905 then regained it again in 1906 before retiring in 1907.

George learned to scull as a boy when he rowed his family's farm produce from Dempsey Island four miles to Newcastle. He and his seven brothers also had to row to school each day. His imposing record commenced immediately he began rowing competitively when just 14. In his first race, for youths under 16, he came second. In races for youths under 19 he secured six firsts and five seconds. At 20 he won five all-comers (i.e open) events. As a "dark horse" he came third out of 21 professionals in the prestigious Parramatta River handicap sculling championship event in 1892.

George acknowledged that he was not widely accepted as the top Australian candidate since he had not defeated former world champion and fellow New South Welshman James Stanbury. Nevertheless, determined to win the world championship he went to England in 1895 competing there for five years to improve his technique and stamina. During that period he was very successful against local opposition winning the championship of England in 1899 and 1900. Indeed, he might have won the 1898 final against Englishman WA Barry had his boat not struck a submerged log when he was leading the race and sank, a minor detail omitted from British accounts. Nowadays, nautical experts using powerful modern computers to analyse the technical data are almost unanimous in their belief that, if a boat sinks during a race, it is unlikely to win.

At the same time as he was preparing for the England Championship in 1900, George trained C V Fox to win the Wingfield Sculls, England's amateur sculling championship. Obviously at a loose end, in 1901 George and two friends rowed a triple scull from Oxford to Putney (London) a distance of 104 miles in 13 hours and 59 minutes.

He subsequently won the world sculling title and £1000 pounds (£500 a side) from Canadian Jacob ('Jake') Gaudaur in 1901. The English Field magazine noted his "light and clean stroke". Elsewhere it was said he rowed with long sweeping strokes resembling the late, brilliant Harry Searle. The Sydney Mail on the other hand avoided any technical jargon. It described George as a "real" Australian, "handsome, manly and determined" and "one of those men who seem to get larger the more clothes they take off". Now that is a sound basis for winning a world title in any sport.

The astounding aspect of George's success was that at 5' 8 1h" [174cm] tall and weighing just eleven stone four pounds (71.7 kg) he was not big. Today he would be classified a lightweight rower. George is an excellent example of a good little man with technique and determination defeating a host of good big men.

An interesting aspect of the win was that rather than use a 31foot boat similar to that rowed by his opponent and preferred by most professionals, George used a shorter (25 foot) boat called a 'stump' outrigger designed by an Australian boat builder, Chris Neilsen. George is also credited with introducing left and right-handed oars to England. Flattening the sleeve on the underside of the oar helped keep the oar square in the water and reduced the tendency to over rotate.

He returned to Australia in 1902 with the title and a new wife. He was welcomed by the rowing fraternity in Adelaide then received a public reception in Sydney hosted by the Lord Mayor with all the top rowers of the day in attendance. Arriving home in Newcastle he was met by the Mayor and 7000 people to be presented with a gold medal and a purse of sovereigns.

George lost the title to fellow Australian James Stanbury in 1905 then regained it in 1906. This time one Sydney reporter claimed that he had changed his style, pulling more quickly with a much shorter stroke so that it was not as attractive as when he first won the title. On the other hand a Newcastle Herald reporter, having regularly watched George in training demonstrated the value of expert opinions by stating that he was rowing a longer stroke. Whatever stroke length he actually used, George was three lengths behind at the 21h mile mark and seemingly well beaten by the favourite. Showing his renowned will-to-win, George pressured Stanbury, overhauling him at Gladesville and going on to win by six lengths. The race was in front of 50-60,000 people including numerous Novocastrians who had taken advantage of the cheap excursion train. George's supporters made up the majority of spectators on the larger steamship for which they were charged one pound (£1) for the additional comfort. Several smaller steamers were cheaper costing just ten shillings (10/-) or five shillings (5/-). As well as winning his opponent's £500, he received an equal amount from his backer, S Arnott. He also received £99.16.3 being the challenger's share (25%) of the steamer receipts. If George had a little flutter on himself it was not revealed to the press.

Following his victory over Stanbury, George's brother Charlie was the first of all George's likely opponents to lodge a deposit thus giving him the right to the first answer. The possible match was not taken seriously by the public nor given any credence within rowing circles. George's subsequent retirement as world sculling champion in 1907 surprised nobody and, having effectively refused his brother's challenge, the title passed to Charlie. Such a situation would be thought of today as curious, even suspicious, but that was not the case then. It should be borne in mind that, at the time, professional rowing had no formal organisation or structure. In the absence of a governing body regulating the sport a title-holder could dictate how, with whom and under what conditions titles were contested. In his first defence of the title Charles lost to a New Zealander, William Webb.

George returned to England in 1909 in an unsuccessful attempt to regain the Championship of England. Before he left for home his English admirers held a dinner in his honour from which we learn a little more of what made George a successful rower. Although smaller than his top class opponents he was said to possess a faultless technique. In particular they praised his dogged persistence; a much admired ability to "hang on", that friend and foe alike believed enabled him to win many of his races. In response, he related the story of his first match. When just eight years old, an argument with a school mate over who was the better man was decided by a boat race. Thus one moonlight night on the Hunter River he won his first race. Clearly, he was a born rower. They discussed stake money amounting to pounds but settled on fourpence each. Evidently, he was also a born professional rower.

At another dinner organized by The Sportsman, George was presented with a cheque for £24. 15. 9 donated by his English supporters. This was on top of a previous gift of £100 a few years earlier. He was also presented with a vellum [a superior quality parchment, most commonly of calfskin] containing the signatures of many of the world's best oarsmen. His wife's lady friends presented her with a solid gold bracelet. George remarked that they could not have made more fuss of him had he won.

George established a successful boat building business on the Parramatta River at Gladesville in 1903 which he ran until the 1970s. His business built seventy-five percent of all the racing shells used in Australia at the time as well as boats being built for clients in many other countries. Bobby Pearce won a gold medal at the 1928 Olympics in a one of his boats. He also went on to coach new generations of rowers -both professional and amateur including NSW crews, at least one Australian Olympian and one world champion sculler. George was President of the NSW Rowing and Sculling League (1917) and was instrumental in formulating standard regulations to govern world sculling championships. Between 1909 and 1919 George made his shed available to the NSWRA when it was unable to afford a suitable premises for a headquarters and boatshed.

In the 1960s, George acknowledged that modern rowers were rowing faster which he attributed to better boats and scientific training. However, he reckoned that for stamina and skill, the old-time champions would have matched the best of the modern rowers.

The following tribute was published in the 1960-61 Sydney Rowing Club annual report.

So is severed one of the few remaining links with those early glamour days when sculling was "The Sport" and from the likes of George Towns, Australia derived the reputation of a power to be reckoned with in the rowing and sculling world.

"George" as he was known to all, never lost interest in the sport. He assisted and imparted his knowledge to many a young, struggling sculler, and, as is well known, produced, coached and trained others to world championship class. A sad loss to his family and the rowing world in general. 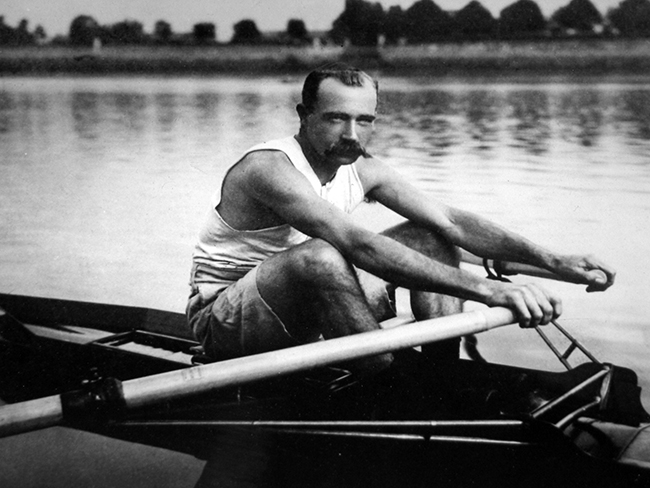 George Towns in 1901 as World Champion