Roy Thursfield joined the Club in 1931. In his early years of membership he was a consistent and enthusiastic competitor achieving success in maiden, junior and senior events in all classes of boats until he was compelled to retire from active racing for business reasons.

Roy was also much involved in the administration of the Club and of rowing in Victoria. He was elected to the Conmittee in 1934 and was Vice-captain in the 1935-6 season. On his return from active service in 1946 he again devoted much of his time to Club affairs and was on the Conmittee from 1947 until 1954. He was elected a Vice-President in 1957 a position which he held until his death.

Roy was also a Vice-President of the Victorian Rowing Association until 1966 when he was elected as the Patron of the Association. He was for a number of years the joint secretary with Norm Cairnes of the Melbourne Henley Regatta and was the manager of the Rowing Team at the Commonwealth Games in Vancover in 1954.

Roy was always generous in his financial support of the Club and of all appeals launched for Victoria or Australian rowing. In 1947 and 1948 he donated a racing four to the Club and imported a set of oars from England for use by the senior crews and these were only two of his contributions over a long period.

Member of recent years will rot have known Roy Thursfield or have had the opportunity of enjoying his cheerful company in the Club and at regattas. He was prevented by ill-health from coming to the river for fifteen or more years. Nevertheless he maintained his interest in the Club's activities and in its members and in his passing the Club loses a loyal supporter and many of its members a life-long friend. 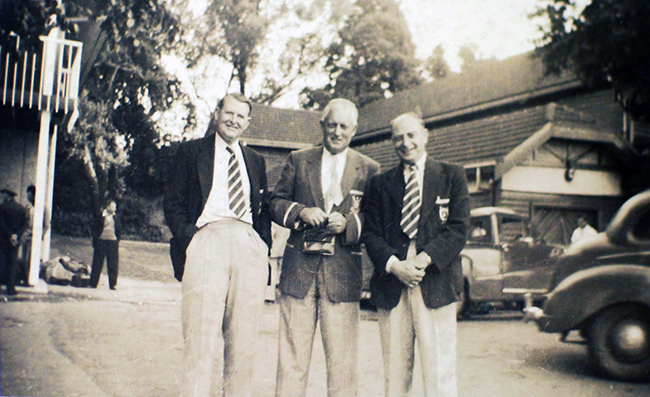 Obviously Roy was quite a character. In his rowing days, it was reported in the Club's history that he "was unfortunate not to have achieved selection in the Victorian King's Cup crew in the early 1930's. Perhaps Roy's ability to attract trouble and antagonise officialdom had something to do with this omission." Arthur Atkins, in his dead pan style, described him as "a noisy but entertaining and amusing fellow". Clearly he was very good company.

He was well known and liked by all members.

On being elected Patron of Rowing Victoria, Mercantile issued the following story on him.

We offer our congratulations to Roy Thursfield the newly elected Patron of the Victorian Rowing Association. No one could be more deserving of this honour as Roy. During his association with rowing over a period exceeding forty years he has actively contributed to the sport as an oarsman, as an administrator and financially.

Competitively, Roy as a member of Mercantile won all of his Maiden, Junior and Senior races during the late twenties and the thirties. In this period he was Vice Captain of the Club and a member of the Committee and active on the social Committee.

In the early post war years when rowing equipment was difficult to get, Roy generously donated to the club a set of ten, English Ayling oars. His generosity to rowing is proverbial, being always among the first to financially assist the Association, the Club and the sport when necessary.

He was elected Manager of the Australian Empire Games Rowing team to visit Canada in 1954. The team consisting of single and double sculls, pair without cox and four with cox was successful in winning all events except the single sculls.

In 1951, Roy was appointed Joint Honorary Secretary of the Melbourne Amateur Regatta Association, responsible for the conduct of the Australian Henley and continued to organise this the major rowing regatta in Australia until forced by illness to resign two years ago.

Roy who has been a Vice President of our Club for many years, because of ill health does not often visit us these days, but his contemporaries have happy thoughts of rowing races, festivities and exploits with this true MERCANTILIAN whom we are so happy to see as the new Patron of the Victorian Rowing Association.