(This obituary was published on the Rowing NSW website on 3rd September 2020 and has been reproduced with permission of the author, John Childs.)

It is with great sadness that we heard of Martin’s death on Sunday morning. He had been suffering from dementia. He was 79, much respected and loved by all who knew him.

Martin Tattersall was born in June 1941, and educated at Winchester College in Hampshire. He spent 3 years studying Natural Sciences at Magdalene College Cambridge and then went on to do his medical degree in London. His degrees and fellowships included MD, ScD, MSc, FRCP (London), FRACP.

He was appointed Professor of Cancer Medicine at the University of Sydney in 1977. It is reported that this was to be Australia’s gain. He chaired The Australian Drug Evaluation Committee (ADEC) from 1997-2008. His awards are many and he was a member of the WHO Cancer Committee for 20 years and is Life Member of the International Union Against Cancer, Roll of Honour. He was recently made Emeritus Professor by the University of Sydney.

After university Martin backpacked for two years, including working as a doctor in the Yukon at Fairbanks and outlying towns. (In a later interview Martin once said that one of his least enjoyable jobs was doing a coroner's post mortem in the Yukon: “only God knows how he died”.) He also spent time in South America and reported that his parents were worried that he may not return to medicine. They need not have worried.

On his lounge room wall in Sydney hangs his oar from his Cambridge college eight. In Australia Martin rowed with Sydney University Masters Rowing - where his wife Sue rows - before joining North Shore Rowing Club in 2008.

Martin participated in many regattas in both sweep oar and sculling. He was quite reserved but loved to joke with fellow rowers. He rowed in several men’s eights in his favoured bow seat. He and Sue generously hosted an end of season dinner for NSRC’s Red October squad at their waterfront house in Woolwich opposite the North Shore club.

He was happy to fill in with crews in various squads if his busy schedule allowed.

Martin, in an interview in The Lancet in 2002, was asked “How do you relax” to which he replied: “Single sculling on Sydney Harbour in the mornings when it’s still dark”. (He was also asked “Do you believe in monogamy?”. “Yes. One mother-in-law is enough!”)

He spoke of his rowing for Cambridge and joked about the formality of the BROs in one sculling race asking him very politely if he did not mind them passing his boat to get to the leaders in the race! 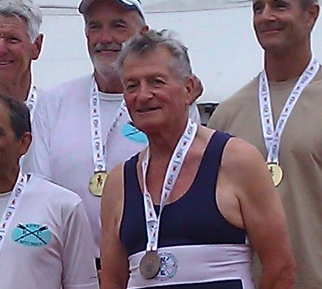 Many fellow rowers expressed sorrow and spoke of what a great bloke he was (these excerpts from NSRC members):

“Martin was a true gentleman who was so modest and gave so much.” (Jim Hole)

Bruce Hutchison: “What a (shit) year this has been.”

Nicki Blackwell: “I saw him recently but he didn’t recognise me. So very sad to see such an intelligent and vibrant person taken over by that insidious disease.”

Elizabeth Denney-Wilson: “Very, very sad news, I can’t quite believe that he deteriorated so quickly and dramatically. It saddens me that we cannot give him a fitting send off in these COVID times.”

Chris Walsh: “Wow, it happens quickly. He was racing 2 years ago.”

Andrew Gibson: “We spent some time rowing with Martin when we first came to NSRC and valued him as very intelligent yet gentle man with a great sense of the ridiculous. I saw him in our barber’s and, while he was ill, he was still positive”.

Geoff Blundell: “He was a huge name in the medical field and will be greatly missed.”

Hunter Southwick: “He was an accomplished wilderness adventurer who travelled to the wildest and remotest parts of the world and was always happy to share his experiences. One of his last trips was to Svalbard, home of the world’s seed bank and many polar bears. I remember his end of season soiree at his house for the early Red Octobers - an unassuming and good bloke.”

Peter Richards: “We were only talking of Martin last week. Given his intellect and standing, it was very hard for everyone seeing what that dreadful disease had done to him.”

He will be sorely missed by those who knew him.