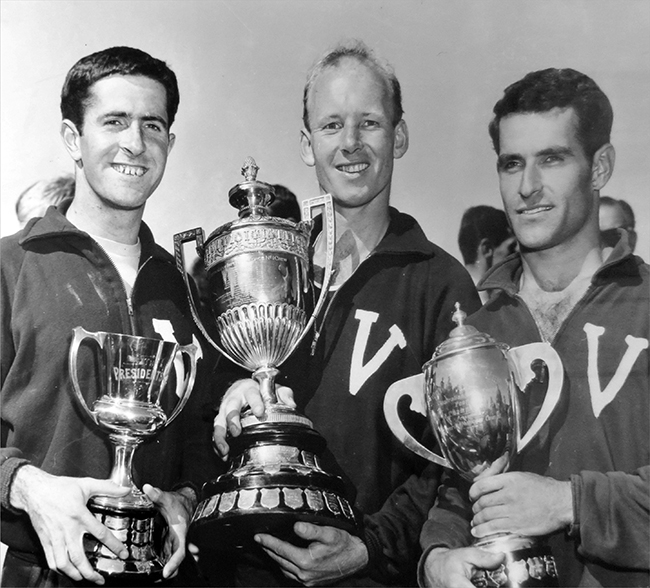 Jeff commenced his rowing in 1955 at the age of 12 as a coxswain. His elite competitive career spanned the very long period from 1960 to 1978. His rowing career continues to this day as an active and very successful masters rower at the age of 70, some 58 years after he commenced in 1955.

He recalls that some of his best racing was in 1973. His favourite race was the 1973 President's Cup in which he dead heated with Ted Hale. A re-row was required and Jeff asked for a re-row as soon as possible whilst the crowd and atmosphere was still available. Jeff recovered better and won the re-row and the Championship. He also fondly remembers a race at the West German International Regatta the same year in which he finished second but was impressed with his racing.

Jeff was apprenticed to his father in his father’s boatbuilding business. A desire to change the nature of boats built in Australia led Jeff to commence his own business in 1966. His boats were light and fast and the business grew quickly, predominantly in smaller boats. By 1973, his large boats also won the big races with a King’s Cup win and by 1974 Australian crews used his boats. He was the first boatbuilder in Australia to build composite construction boats. He asked Klaus Filter of GDR and FISA fame for advice on construction of these boats and was introduced to Leo Wolloner. Leo came to Australia and provided the technical assistance necessary to start composite construction boats. This was again Jeff leading the way in Australian boatbuilding. He supported Australian teams with his boats which were world class.

Jeff's desire to promote the sport in his home town of Geelong led to his generous assistance in the construction of a new boathouse for the Geelong Rowing Association. This enabled more Geelong schools to participate in the sport and provide a base for the continued promotion of rowing. The shed was named in his honour.

Jeff's enduring contribution to the sport and the promotion of it led to him being made a life member of Rowing Australia. He still races at the Australian Masters Championships.