Tom is a delightful, calm and thoughtful individual whilst being a fiercely competitive and rigorous athlete. He is unlike many elite athletes who allow their ambition and competitiveness to override their personality in order to succeed.

Tom commenced his rowing at Ballarat Grammar in year 10 in 2003. He quickly rose to prominence racing in the school's first crew in the following year and again in 2005. In 2005 his school first crew won the Head of the Lake, the primary race for Ballarat schools. It was at Ballarat Grammar that he met Anthony Edwards, a great influence on his rowing career. Anthony was the Director of Rowing at his school at that time and provided the direction, technical assistance and encouragement that he needed. Interestingly, they both competed in the Australian London Olympic rowing team.

Having been coached well by Tom Courtney in the 2005 Youth Cup, he joined Mercantile Rowing Club and started his Agricultural Science university course. The course was appropriate given that he is from a farming family. By the end of that year, he had been awarded an AIS scholarship and took off to Canberra with his course being deferred. He was part of the 'Breaking the Drought" program to blood young scullers. He then came under another one of his greatest influencers, Reinhold Batschi. As with all his charges, Reinhold taught Tom about the training ethic, the relentless nature of training required to be successful and of course the mental approach.

He had a good break in 2007 when Jared Bidwell fell ill and he was selected in the Australian under 23 quad scull at the under 23 World Championships where he won bronze. 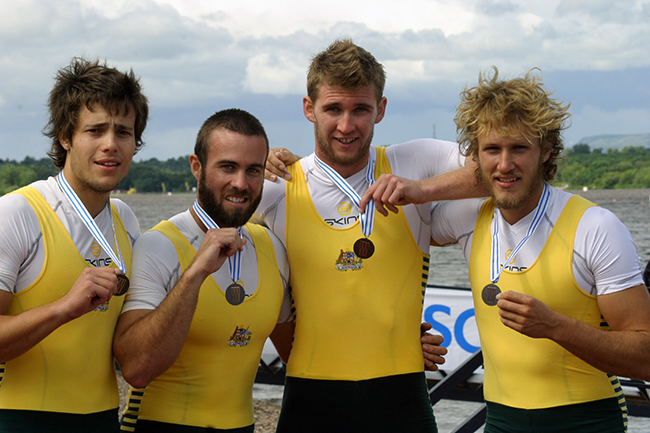 Tom remembers his first King's Cup race in 2008 as being an incredibly tough race, losing narrowly to NSW. It was a baptism of fire for him losing by a canvas and rowing on his no preferred side. He started his exercise science studies that year.

Tom had to make the choice in 2009 between sweep or sculling. Given the greater opportunities in sweep, that change was made. Tom won the four and finished third in the pair at the Nationals that year showing that he was very competitive in sweep. A seat in the Australian eight was the due reward.

2010 was a very difficult year for Tom with injuries finally prevailing - but not before much racing had taken place. A memorable race was the Head of the Yarra when the Mercantile crew rowed through Sydney University to win. Despite taking silver in the eight at World Cup III to Germany, he realised that his hips required surgery if his rowing career was to continue. He did not progress to the World Championships and returned home for surgery. First his right hip, and after a delay caused by a blood clot, then the left hip. Finally the long recovery back to top form. Sadly this left him out of the boat which medalled at the 2010 World Championships.

The following season (2011) was difficult making his way back from surgery and then tearing his quad at the National Championships in the gym. He could not finish the national regatta pulling out of the pair and the Interstate Championships. Fortunately for him, he performed well in the selection trials and made the senior team again. The World Championships race in the eight was memorable for Tom, despite the result. The crew was racing well when the wind caught them resulting in one rower catching a crab. They dropped from second to fourth place. They got the boat moving very well, rowing back to the Canadians to narrowly miss out on a medal.

The London Olympic Games was another highlight of his rowing career although not picking up a medal. The build up and the noise were memories that Tom mentioned. "It felt like time was standing still. I could not feel my limbs." 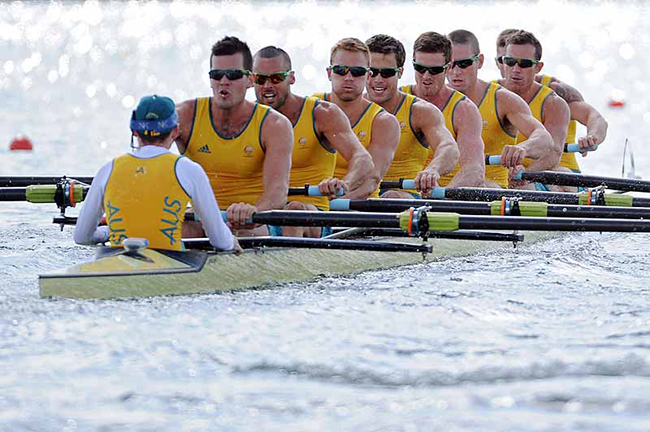 2012 Olympic Eight with Tom in the five seat

Following the Olympics Tom returned to sculling in 2013 after a good result in the single at the NSW Championships. Although he had fun being back in the scull, his body was getting too tired with illness and injury. Naturally the desire then died out and Tom looked to his future. He completed his exercise science and teaching degrees and started his working life.

What did his stellar career teach him? Resilience came immediately to his mind - surviving training, selections, injuries and surgery. Also the very important lesson for all of us, control what we can control. Like all rowers, he draws daily upon the skills, experience and confidence gained through his rowing career in his work.

Tom has returned much to the sport as a coach at both club and school, and is at the time of preparing this profile, director of rowing at St Kevin's College.

Tom has thoroughly enjoyed his rowing career and his time at Mercantile. He had great fun racing with the likes of Drew Ginn, James Tomkins, David Crawshay to name just a few. He is full of praise for the club and heavily identifies with it.