Chris William Stevens, born in 1946, learned to row at Shore before joining Colleagues Rowing Club in 1964. Colleagues was a new club but going very well at the time and had the respected Alan Callaway as their coach. Fortunately for Chris, there was much composite rowing occurring at this time and he was able to row with the best

Within two years of starting club rowing, he made the NSW King's Cup crew in the four seat at the tender age of only 20 years. He also won a coxed four National Championship and his success was rewarded with selection into the Australian team for the World Championships in Bled.

Chris sporting endeavours were shared between amateur rugby and rowing - he enjoyed both. As a youngster, he was able to withstand training for both. He specifically enjoyed the Sunday morning rows to row out the knocks of the day before. He played very successfully for the Gordon Rugby Football Club.

In 1967, Chris again made the NSW eight and this time won. He joined a Haberfield tour of Europe which included the European Championships. Whilst he was being primed for the 1968 Olympic team, he returned from that tour stale. Whilst he does not lament his decisions, he recognises that put too much emphasis on his rugby at that point and his Olympic aspirations vanished.

By 1970 he made his mind up to make the 1972 Olympic team and was serious in his endeavours with rowing again taking precedence over rugby. He took up sculling and had a won a national double sculling championship with Dick Reddel in 1970. "Sculling improved my rowing enormously. The lead up to the 1972 Games was good and I ended up in the pair with Kim Mackney." Sadly the pair did not work out for them and Chris wondered whether he was still grieving over the tragic loss of two good friends and fellow 1972 team mates, Brian Denny and Ian McWhirter.

He achieved his representation goal but the result was not as he wanted. Chris married after the Games and family and work then took precedence over sport. 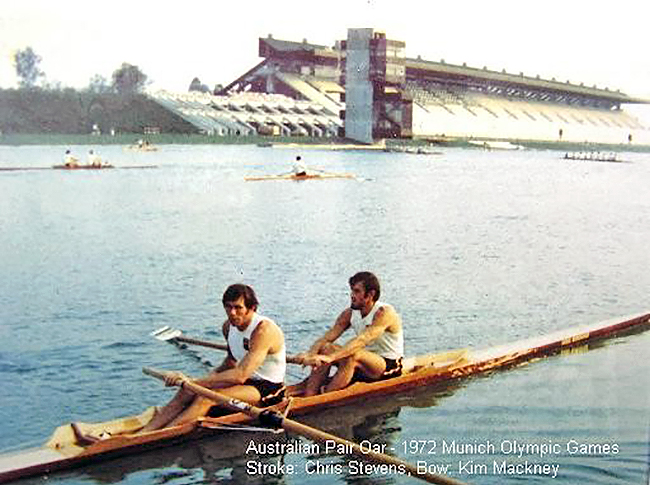