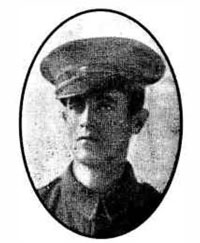 George Stuart Sibbin was seen to be hit and killed while attending to a wounded comrade. He was never seen again and his name is recorded at VC Corner at Fromelles. George had gone to school at 754 and then worked at Shannon's drapery. He was a member of St Andrew's Presbyterian choir and remembered as the comedian of the social events.

He saw humour in almost everything and his cheery disposition, cheery optimism and ready wit brightened up his comrades lot.

His surviving comrades were deeply affected by his death with one of them writing Poor Stuart, we have lost a very loveable pal, whom we will never cease to miss. A blank has come into our lives by his death. George's brother John also served and returned home.