Celebrating a win 2016 at the Head of the River

He joined Mercantile and raced in their youth program successfully with a podium finish in the four and the Interstate Eight. A good result for a first year out of school. 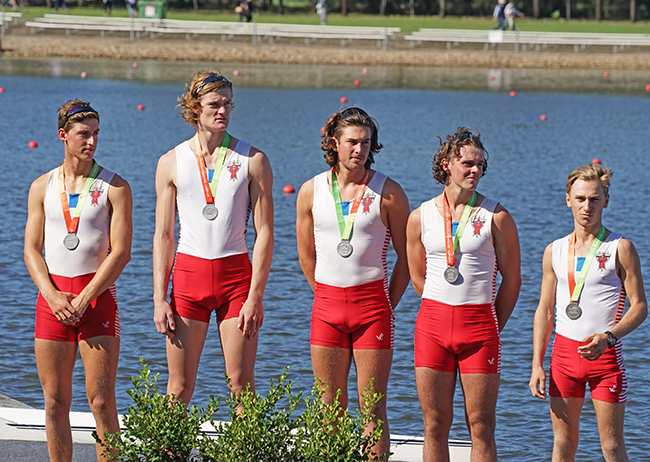 Jack then went to the University of California, Berkley to study and row. He raced in the second varsity eight in both 2018 and 2019 finishing off the 2019 year at the Head of the Charles in the first varsity eight.

However he managed to fit in racing in the US based Australian under 23 eight which was a finalist despite several set backs in its preparation. 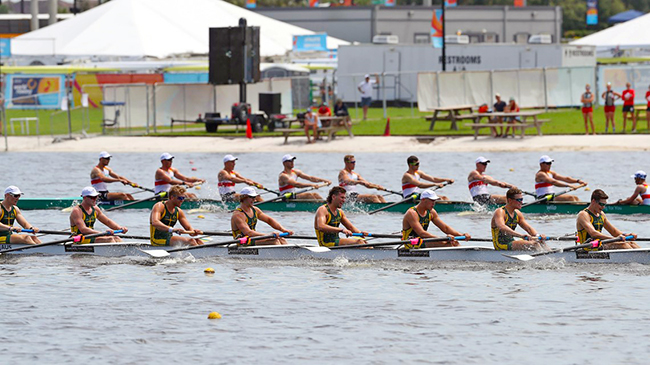 Australian eight with Jack in the five seat in 2019

Jack is trying out for the Australian Olympic team. Although he is currently back in the States finishing off his Bachelor of Arts degree and awaiting to see whether the US rowing season will continue. He will be back in November 2020 for further trials for the Olympic squad.

In response to a question on memorable races, it was interesting to hear that his Head of the River win in 2016 rated highly, despite having had such varied experiences since then. It was not only winning the race, but had other elements such as defeating the dominant Scotch College first crew and his school sweeping all before it in other divisions - the power of school rowing remains significant.

Jack loves competing, relishing the opportunity to get to the start line. He opines that there are far too few races in a season to test out the significant training involved. The racing opportunities are golden and of course he races to win.

He also appreciates the team environment and camaraderie that the rowing provides. Crewed boats are his favourite and the bigger the better - "getting an eight right has to be the best".

Jack had a special word for Mercs saying that it taught him that there is much more to the sport than school rowing. Both Mercs and his school have opened doors for him enabling him to enjoy excellent educational and sporting opportunities. He likes what is happening at the Club with the new high performance program and he is excited to see so many young rowers joining the program.

Jack has so much more to offer the sport and hopefully we will see him in the Tokyo Olympic team. After that? Paris 2024? Given his form to date, perhaps further study at another university? The Boat Race?

This story is only part written.