Rosemary was not a rower herself but has lived rowing throughout her life. She was imbued with rowing by her father Ron March. She accompanied her father coaching on the Yarra daily sitting on a seat on her father’s coaching bicycle. She had her first swim in the Yarra at the age of four years old when father Ron rode into the Yarra near Morell Bridge.

Rosemary attended almost every regatta in Victoria, many in New South Wales and the King's Cup circuit, accompanying her father, a Victorian selector. She also attended international events including the 1967 Royal Canadian Henley Regatta at St. Catharines, Ontario, Canada, the North American Championships and the scene of the great victory by the Australian coxed four containing her good friends from Melbourne. She then flew down to Philadelphia for the day to watch the NSW based Australian eight in training; basically the next year Silver Mexico eight.  She also attended the 1978 World Championships and more recently the 2010 World Championships in New Zealand and the London Olympic Games in 2012.

Her love of the sport and the people within it is evident from even these few sentences. This led Rosemary to become heavily involved in the administration of the sport.

Rosemary had her own sporting achievements being a  water skier, a tricks ski duo with her brother and also a speed boat racer. She also was a director of the Australian American Association which hosted events for visiting businessmen, diplomats and US Navy servicemen. Her duties included managing key stakeholders and arranging social functions. These skills were put to good use for the benefit of the sport. 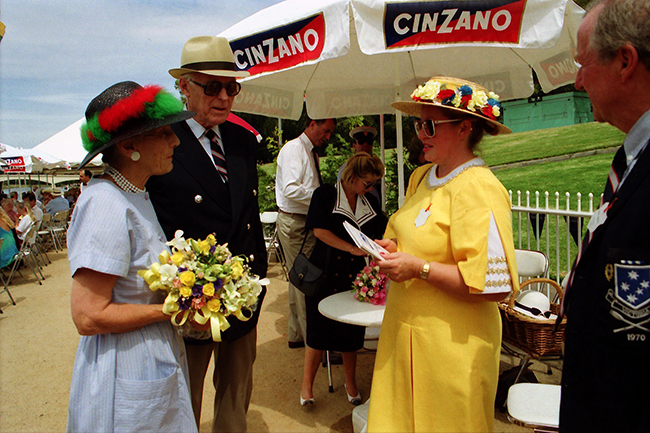 Rosemary became the driving force behind the reinvigoration of the Henley of Yarra regatta in 1982 when the regatta was ailing. She first used her skills in developing the important social side of the event with the Thursday night cocktail function. This function then grew into a dinner in the ANZ Pavilion at the Arts Centre. When the dinner outgrew the ANZ Pavilion, it moved to the Great Hall and when that was too small, then to the Hilton Hotel. The regatta also grew, as did the sponsors and the raffle.

By 1990, the regatta had sufficient clout and financial strength to invite five international crews to race at it and take on a bid for the first World Cup in the southern hemisphere. This bid was successful and in 1993, the first ever World Sculling Cup was held. The regatta was a four day event with 500 people attending a luncheon on the course daily. This event captured the imagination of sports loving people of Melbourne and brought great fame to the sport. It brought back the sport of rowing to the Yarra River and the television coverage of rowing. It was a great achievement for Rosemary and her skilled and enthusiastic 1993 team that made it happen.