In Australia, especially in Melbourne, Stan Nicholes was a highly revered physical (and importantly also psychological) trainer of world class athletes across multiple sports for over 50 years. Stan provided unique physical training and insights to his athletes so they could maximise their performance and provided the training regimes to achieve those outcomes.

In the foreword to the book on Stan, “The Stan Nicholes Story-An Oral History”, leading Tennis Coach Bob Brett had this to say: Stan Nicholes is a giver. He has an intuitive knowledge of the individual in a psychological sense and is able use this knowledge in a practical way. He sees all the dimensions. He reads people very accurately and uses that knowledge to extend or challenge their perceptions of what they think they can do and takes them beyond what they thought was possible.

Initially Stan's training was at Findlay’s Gym then the Oasis Gym and ultimately Stan constructed his own bespoke specialist gym at his home in North Caulfield. In each of Stan’s gym rooms at his home the walls were adorned with photos of many of the ‘greats’ of Australian and world sport that Stan had spent a lifetime training.

Many of Stan’s athletes, especially the rowers, talked of his intensive gym sessions at his Caulfield home and after the session they “decorated the roses” in his front garden. The roses thrived…

Prior to Stan becoming an outstanding trainer he was a successful athlete in his own right as a weightlifter.

Stan’s involvement across many sports began just post World War II with tennis and, in particular, working alongside the doyen of Australian tennis, Harry Hopman, and the highly successful Australian Davis Cup Team, and continued for another 40 years with the ‘sporting royalty’ of many sports that significantly included: 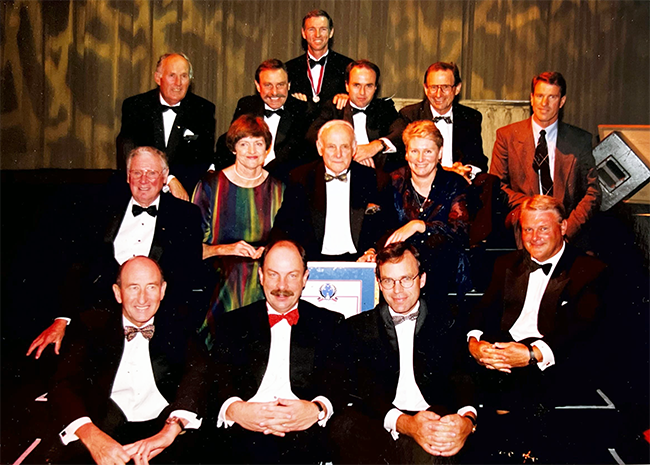 These crews and the rowers became World Championship medallists and Olympic Games medallists.

Leading rowers have reflected on their training from Stan:

Stan Nicholes was inducted into the Sport Australia Hall of Fame on 26th November 1998, general division.