Image to the right is Jack as Captain of Mercantile Rowing Club.

There is a significant family connection going forward many generations.

Quite apart from the Sloan family connection, there are the McLean/Carr connections. There is a five generation, Mercantile family.

My father Donald McLean was born in July 1917 out of this union.

On 23 March 1919 Gordon at just 27 years old died of the Spanish Flu leaving behind baby Donald not yet 2.

Jack Mounsey and Bob Gregg rowed together at Mercantile in many crews as shown in the photos under Jack’s profile.

Jack Mounsey and Bob Gregg were rowing mates and Grandma Ruth used to tell me of her great thrill of “dressing up to the nines” to attend the great social outing of the Henley on Yarra and seeing brother Bob compete.

It is a very obvious observation that the young widow Barbara Ruth (known as Ruth) would have mixed with Bob’s crew mates.

The first born to Ruth, my father Donald, kept his name of McLean and the two half-brothers were Mounseys.

Jack passed away in Darwin in 1970 as he was being looked after by his son Dr Doug Mounsey and family. My wife and I were working in Darwin at the time of his death.

Jack used to take me (aged 7-8) in to the river on a Sunday morning while he had his regular row with his old mates at Mercs but the crowning glory of the morning was the “barrel” of beer behind the sheds after rowing. I was his guiding light to the No 1 East Coburg tram for the trip home to be greeted with a very quiet Ruth waiting patiently for Jack to arrive and carve the Sunday roast!!

There is also a tie up with Bob Gregg and Cec McKay as rowing mates. Bob ended up running a McKay sheep property Burnewang Park at Hunter near Elmore for many years.

Grandma Ruth used to take me up to the farm to see her brother and I remember the crossed oars above the huge fireplace (Kings Cup oars) and collecting new born lambs in the old 1928 Crossley.

I have many memories of Grandpa Jack and Grandma Ruth and Great Uncle Bob. Haven’t yet mentioned the Collingwood footy Club with grandpa and his two sisters with me allowed into the dressing rooms to hear coach Phonse Kyne give his pre match talk.

The following is based on his obituary in the Mercantile Rowing Club annual report of season 1969-70.

John Mounsey joined Mercantile in 1908 and possibly endeavoured to emulate the feats of his illustrious uncle, A. B. Sloan, an outstanding Victorian oarsman and footballer. Although not quite reaching the high plane of his relative, he was nevertheless a successful oarsman, footballer and capable administrator of the Mercantile Rowing Club. Like his uncle, he played top level football whilst pursuing his rowing. Unlike Sloan who played for Fitzroy, Mounsey played for Collingwood in the 1912 season.

After passing through the period of learning to row under his uncle's instruction, he achieved success in 1913 by winning the Maiden Eight at Henley and the following year by winning the Founders’ Challenge Cup for Junior Eights.

1914 Junior Eight – Three members of this crew died in WWI

Unfortunately the First World War broke out and there was very little rowing for the next few years. Jack and many others traded their rowing togs for the A.I.F. uniform. Jack proved himself a good soldier, rose to the rank of sergeant and was awarded the Military Medal. [His grandson Lachlan McLean advises that his award was the DCM (Distinguished Conduct Medal) as gazetted August 1918.] We have been impressed by his talks at our Anzac Day Services where he was a regular attendant. 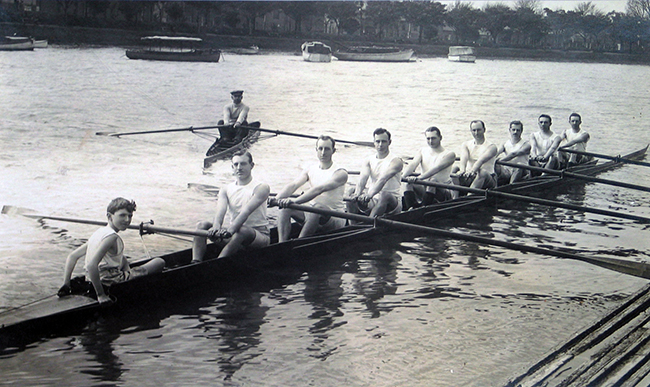 Above: John Mounsey as stroke of the 1919 Club Senior Eight

When rowing resumed after the war Jack gained a seat in the Mercantile Senior Eight and represented Victoria in the King’s Cup in 1922 and 1923. He was also reserve in 1926. 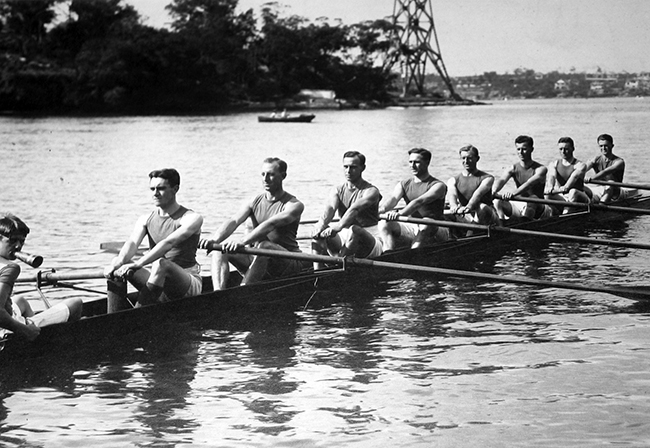 Elected Club Captain in 1922, he most capably administered Club affairs during the next four years. It was during this period that a disastrous fire destroyed the shed, together with many boats and much equipment. The Clubhouse which we have enjoyed for the last 45 years is attribute to the determination and planning of this great Mercantillian.

After retiring from active rowing, many years were spent in rowing administration and many a raw official has been helped by his kindly advice. He was a member of the jury for the 1956 Olympic Games. 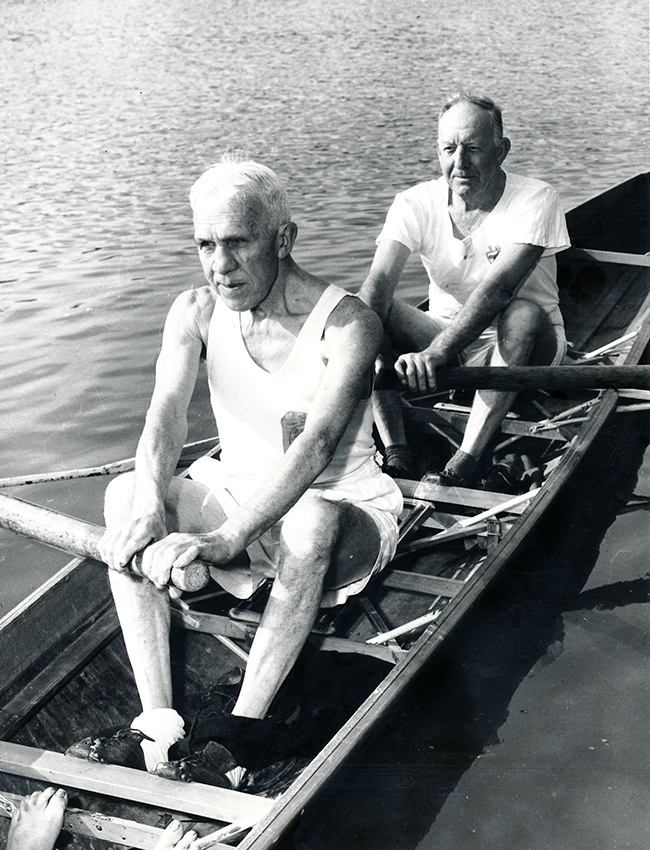 Each Sunday for some 40 years, Jack rowed a three mile stretch with fellow older members on the Upper Yarra. He started his rowing career with fellow Collingwood footballer Bob Rush. Bob played for Collingwood from 1899 to 1908 and was a noted football administrator pre WWII.

We mourn the passing of this great man, a staunch supporter of Victorian Rowing and above all, a man who always held out a helping hand.

Updated May 2021 with information provide by his grandson Lachlan McLean