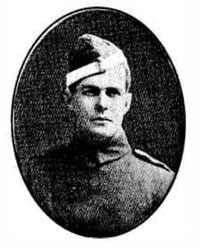 Lindsay died as a result of an aeroplane accident at Netheravon in England. The son of James and Edith he was born in Bairnsdale in 1893. He was farming locally when he enlisted. He joined the artillery of the 2nd Australian Division, and while in France he obtained a commission in the Royal Flying Corps. A letter to his father said he had learned the art of flying quickly and went up by himself and did a splendid flight and was very proud of it.

On that Saturday afternoon he had started off full of confidence but had only gone a few hundred yards and was not more than 25 feet high when the tail of the machine dropped and he could not right it and crashed to the ground. Despite being critically injured he lingered on for an hour without regaining consciousness and was buried the following Tuesday.